The legendary picnics of the early Greek Australians

“I remember my mother waking up early in the morning to prepare all Greek delicacies for us to enjoy with our family and friends,” says Doris Falidis Nickolas

At least once every couple of months on a Sunday, mainly during the spring and summer months, most Greek Australian families would get together with family and friends and head to one of the many national parks to enjoy a picnic under the sun.

“I have the fondest memories of those legendary picnics that played a significant role in keeping the Greek culture alive. It was our parents that wanted us to all stay together and have a sense of belonging here in xenitia,” says Greek Australian author Doris Falidis Nickolas, who would wake most Sunday mornings to her mother frantically preparing a variety of Greek delicacies for everyone to enjoy at the Belair National Park in Adelaide, South Australia.

“It was a ritual. My mother, like most Greek mothers of that generation, would get up extra early to prepare food such as stuffed peppers (yemista), dolmades, Greek salads, cold meats, veggie sticks, fresh bread and of course olives, feta cheese, fruit and whatever else could fit in their plastic containers for all to enjoy throughout the day. Needless to say that most of our parents made sure they also brought their own hot Greek coffee in a thermos whilst us children indulged in a soft drink as a special treat, before heading to the little park delicatessen, where we would often treat ourselves with lollies and ice-cream,” says Doris.

From open grassy spaces to beach side locations, national parks in Australia had plenty to offer and so Sunday picnics at the park slowly became a trademark tradition for the Greek community.

During the day, the young girls would wander off to explore or find a nice spot to sit and chat. Occasionally they found amusement in catching little frogs and yabbies which they would later set free.

Parents of that period were not at all, or at least didn’t seem to be, concerned about their children’s whereabouts.

The men would enjoy a game or two of cards, while the women were happy to either leisurely walk around the surrounding grounds or sit and chat, enjoying some ‘time out’ from their everyday ‘σκοτούρες’ (troubles). 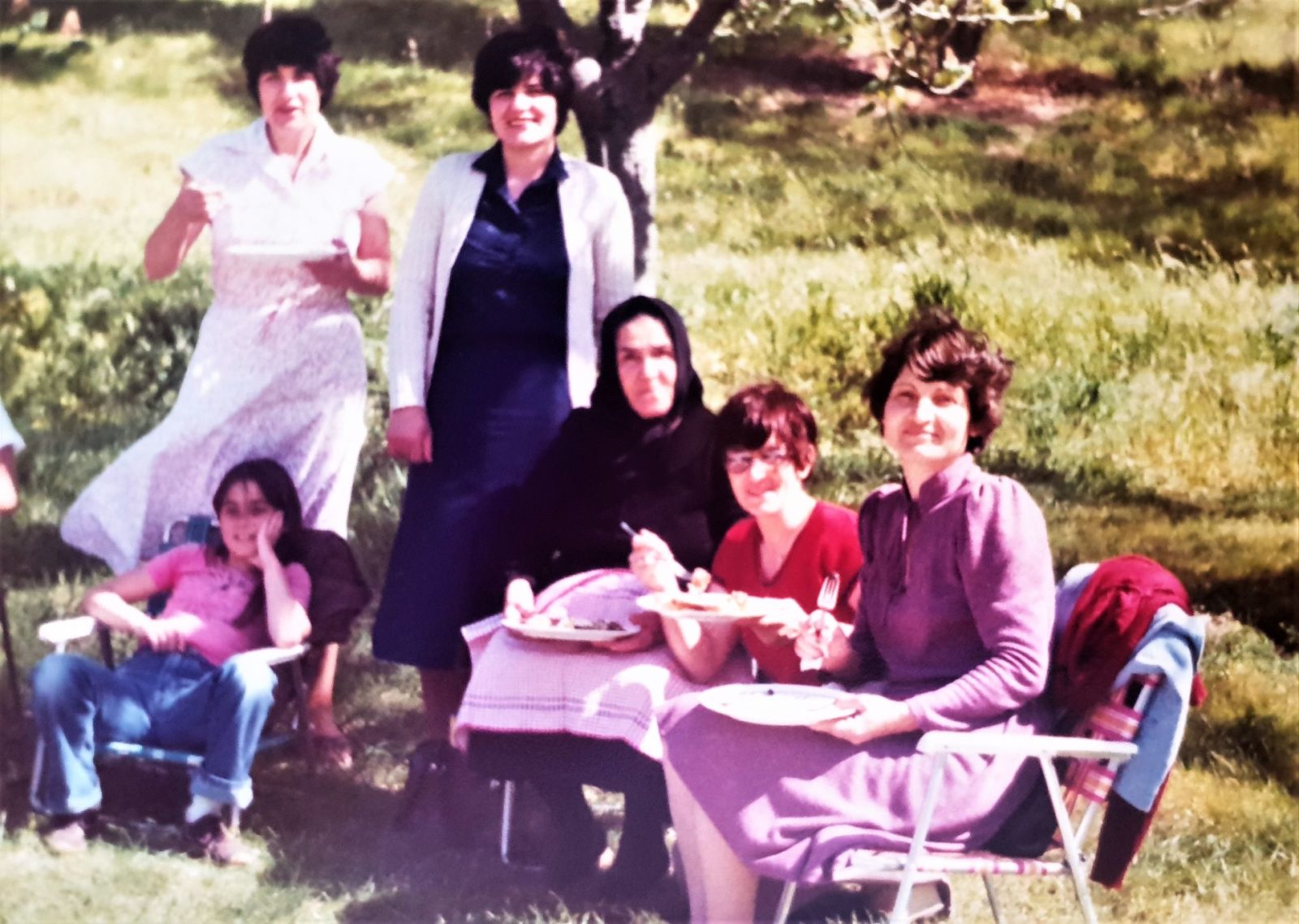 The men enjoying a game of cards. What’s a Greek picnic without a lamb on the spit? Doris at a young age enjoying the sunshine at Belair National Park.

There were hugs, laughter and joy in seeing grandparents, cousins, aunties, uncles and friends all relaxing and having a good time, and the day wouldn’t end any time before 6.00 pm.

“Everyone would then come back to either ours or my auntie’s house (as we lived close to Belair) and continue the evening with some more Greek coffee and treats for us children. The time went by, but for some odd reason nobody seemed to care as to whether we all had school and parents had to go to work the next day,” Doris recalls.

Interestingly, the origin of the word ‘picnic’ is shrouded in mystery, although the idea of a picnic has always meant a social event for which each guest provided a share of food. Later, this became an outdoor excursion to a place in the country where again friends could meet, and provisions were shared.

“For us and all Greek families that had just migrated to Australia, a picnic was something exciting to look forward to at the end of the week, and the best way to stay in touch not just with our friends and family, but also with our culture and Greekness, which were missing being so far away from home,” Doris says.

“I am sure I am not alone in saying that most first and second generation Greek Australians have the fondest memories of those good old days and secretly wish they could have them back. I know I do.”