Smyrna Catastrophe in literature from Hemingway to Henry Miller

On 13 September, 1922, the Turkish nationalist army lit four fires around the perimeter of the Armenian neighborhood in Smyrna, which eventually spread and engulfed much of the city 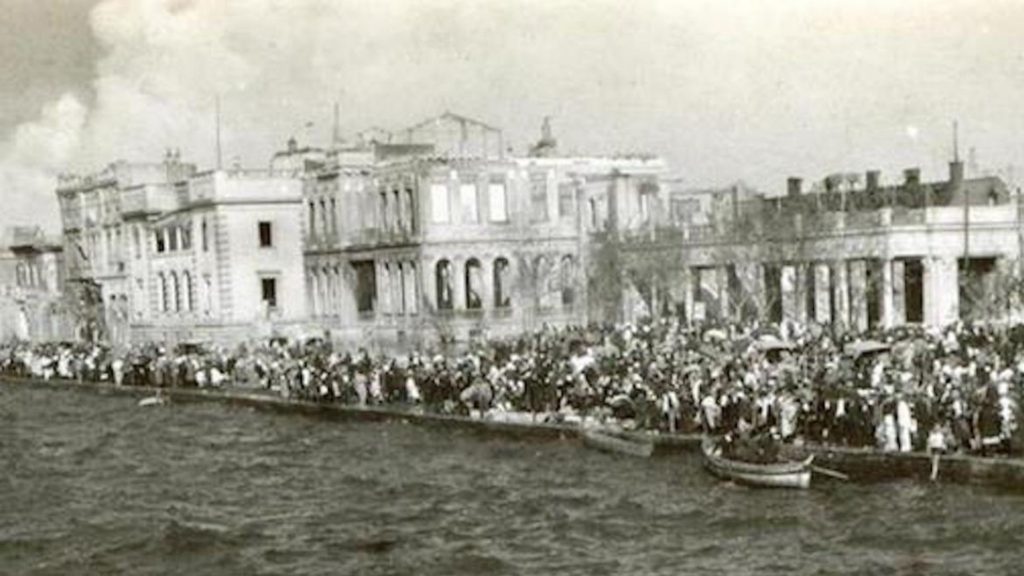 When Smyrna was set on fire on 13 September, 1922, leading to a chaotic evacuation

Nobel Prize laureate Ernest Hemingway begins his account of the Smyrna Catastrophe by attempting to confuse the reader. Who are ‘they’ and who are ‘we’, and what is the connection between the speaker and the ‘we’ in the harbour, or between the speaker and the events he describes? It is only as the piece unfolds that we begin to understand that Hemingway is describing the plight of the Greek women and children trapped at the waterfront of Smyrna, absolutely helpless, unable to escape and easy targets for the brutality of the victorious Turkish army.

Elsewhere he writes: “The worst, he said, were the women with dead babies. You couldn’t get the women to give up their dead babies. They’d have babies dead for six days. Wouldn’t give them up. Nothing you could do about it. Had to take them away finally.”

These laconic, relentless words reflect not clarity but rather, as Thomas Strychacz wrote, “the terror of events that rupture the boundary of what is rational and comfortably known.” We learn that the speaker is on a British ship in Smyrna harbour, watching one of the greatest crimes of the twentieth century unfold. As we do so, Hemingway, interposes between the horror of the massacre, with the banality of army functionaries, going about their business, completely uninvested in the human tragedy unfolding before their eyes. Hemingway renders their discourse in clipped sentences, Woosterian sentences such as: “frightful rage,” “the fellow,” “topping,” and “My word yes a most pleasant business.” For the officer, the most immediate priority is not to save the innocent, screaming on the quayside from destruction, or to put an end to their suffering. Instead, it is to shut them up. “We used to turn the searchlight on them to quiet them. That always did the trick.” In two short sentences, the final humiliation and dehumanisation of the victims takes place. They are an annoyance. Nothing more.”

READ MORE: A Journey Through Smyrna; two cultures, one journey

Yet there is despair behind the aloofness and the sarcasm: “You remember the harbour. There were plenty of nice things floating around it. That was the only time in my life I got so I dreamed about things,” the narrator confides. Yet is a despair, not borne of empathy, but rather of having to witness events that disturb his aesthetic. He views the Greek women, pulled on board the British ship and languishing in the hold, as animals, mere cattle: “You didn’t mind the women who were having babies as you did those with the dead ones. They had them all right. Surprising how few of them died. You just covered them over with something and let them go to it. They’d always pick out the darkest place in the hold to have them. None of them minded anything once they got off the pier.” The act of birth, usually a movement from darkness to light, here is a movement into darkness and is in fact, a death.

For it is the plight of the animals that finally moves the dispassionate British soldier, not the slaughtered Smyrniotes at the quay: “The Greeks were nice chaps too. When they evacuated they had all their baggage animals they couldn’t take off with them so they just broke their forelegs and dumped them into the shallow water. All those mules with their forelegs broken pushed over into the shallow water. It was all a pleasant business. My word yes a most pleasant business.”

Hemingway never got to Smyrna. Although he provided detailed, iconic reportage of the Greek retreat from Adrianople (current Edirne), and the plight of the Greek refugees of Eastern Thrace, he arrived in Smyrna too late, yet his short account proved immensely influential. In Hemingway’s writing about the events of 1922, nearly everyone is a victim. An elision of ethnicities take place so we are given neither significant action nor direction, but simply, endured violence. Humans and animals all suffer. As Madame Marie, the proprietress of an Adrianople hotel muses: “They are all the same. The Greeks and the Turks and Bulgars. They are all the same.”

Later, in his ‘In Our Time’, which opens with the Quay scene, Hemingway will link the tragedy of the corpses floating in the water at Smyrna with the senseless execution of the six anti-Venizelist officials held responsible for the Greek military defeat in Asia Minor: “They tried to hold him up against the wall but he sat down in a puddle of water… When they fired the first volley, he was sitting in water with his head on his knees.”

For Hemingway then, Smyrna is cruelty and evil madness, a symbol of the suppurating sores of post Great War Europe.

In 1966, American writer John Dos Passos published ‘The Best Times’, a memoir in which he recalls his 1921 sojourn in Constantinople, reporting on the Greco-Turkish war. Heavily influenced by Hemingway he wrote: “A grubby little war was going on in Asia Minor… One port on the Sea of Marmara was crowded to the waterline with desperate Greeks, men, women and children, whose villages had been burned by the Turks. Another was stuffed with Turks in the same plight…The irony was that the Greeks and Turks and their pathetic women and crying children all looked so much alike it would have taken a linguistic expert to tell them apart.” The inference is clear: this is not a crime against a particular race. It is a crime against humanity itself and all the innocent are victims.

A master of laconic irony in the style of Hemingway, Dos Passos is scathing in his oblique condemnation of those who chose to focus on the political, rather than the human dimensions of the calamitous events of the Asia Minor Catastrophe. In his 1927 ‘Orient Express,’ there is a remarkable scene where the Greek Archbishop of Samsounta in Pontus who was Germanos Karavangelis, an earlier protagonist in the Macedonian Struggle, announces to a group of foreign journalists that the Greek population is being expelled from the city: “The archbishop’s full lips are at the rim of his tiny coffee cup. He drinks quickly and meticulously. In one’s mind beyond the red plush a vision of dark crowds crawling inland over sun-shrivelled hills. The women were crying and wailing in the streets of Samsoun, says the officer. The news must be sent out, continues the archbishop; the world must know the barbarity of the Turks, America must know…Again in one’s mind beyond the plush, and the polished phrases… the roads at night under the terrible bloodorange moon of Asia, and the wind of the defiles blowing dust among the huddled women, stinging the dark attentive eyes of the children, and far off on the heat-baked hills a sound of horsemen.”

David Roessel writes in his chapter on the ‘Quai of Smyrna’ in ‘In Byron’s Shadow: Modern Greece n the English and American Imagination’. He states that by deliberately excluding the political background from the Greco-Turkish war and the ensuing Catastrophe, and instead focusing on an immediate event, masters of the art of omission, where there is an omission from the text of overt descriptions of some crucial matter around which the emotions or themes of the text pivot, both Hemingway and Dos Passos achieve an intensity of focus that uses the fate of the Greeks, as a metonym for the plight of the entire world after the ravages of the First World War. Hemingway’s depictions of the Catastrophe as they appear in ‘In Our Time’, are thus intrinsic to Anglophone cultural conceptualisations of Greece linked as they are to the consequences of violence.

In ‘The Colossus of Maroussi’, a book that is key to the construction of Modern Greece in Western eyes, Henry Miller acknowledged the key importance of Hemingway’s accounts of the Catastrophe in placing the tragedy into its enduring global context: “The Smyrna affair, which far outweighs the horrors of the First World War… has somehow soft-pedalled and almost expunged from the memory of present day man. The peculiar horror which clings to this catastrophe is due not alone to the savagery and barbarism of the Turks but to the supine acquiescence of the big powers… And as long as human beings can sit and watch with hands folded while their fellow-men are tortured and butchered so long will civilisation be a hollow mockery, a wordy phantom suspended like a mirage above a sea of murdered carcasses.”

So many murdered carcasses later, that final hollow mockery of civilisation belongs to Hemingway himself in his poem about the 1923 Treaty of Lausanne:

They All Made the Peace – What is Peace
“Well what do you boys know this morning?
Oh they’re shrewd. They’re shrewd…
… Don’t talk about M. Venizelos. He is wicked. You can see it. His beard shows it..
Then there is Mosul
And the Greek Patriarch
What about the Greek Patriarch?”
Never forget the hollow mockery. Remember Smyrna.