Art Athina brought the crowds to Zappeion Megaron to enjoy the latest trends in art.

Art Athina, Greece’s largest annual, international contemporary art fair, this year in its 24th edition, was inaugurated by Greek President Prokopis Pavlopoulos on Friday the 13th at its new venue – the Zappeion Megaron.

It was befitting that inside the premises of this grandiose neoclassical building, Pavlopoulos spoke of the urgency of the issue of the return of the Parthenon Marbles. He emphasised that the denial of the British Museum to return the Marbles, does not honour the people of Great Britain, but instead displays the character of “a common receiver of stolen goods”.

This year, this prestigious event, managed to gather 36 galleries from Greece and abroad under one roof, titillating the art-loving audiences also with video screenings, talks, an educational programme, plus live art performances of all sorts: from Eleni Mylonas’ use of plastic waste to transform herself into a sea monster, to an artistic game of monopoly among artists sat around a table, donned in suits, gathering their gold and property, while one of them (who was headless), gathered hearts. 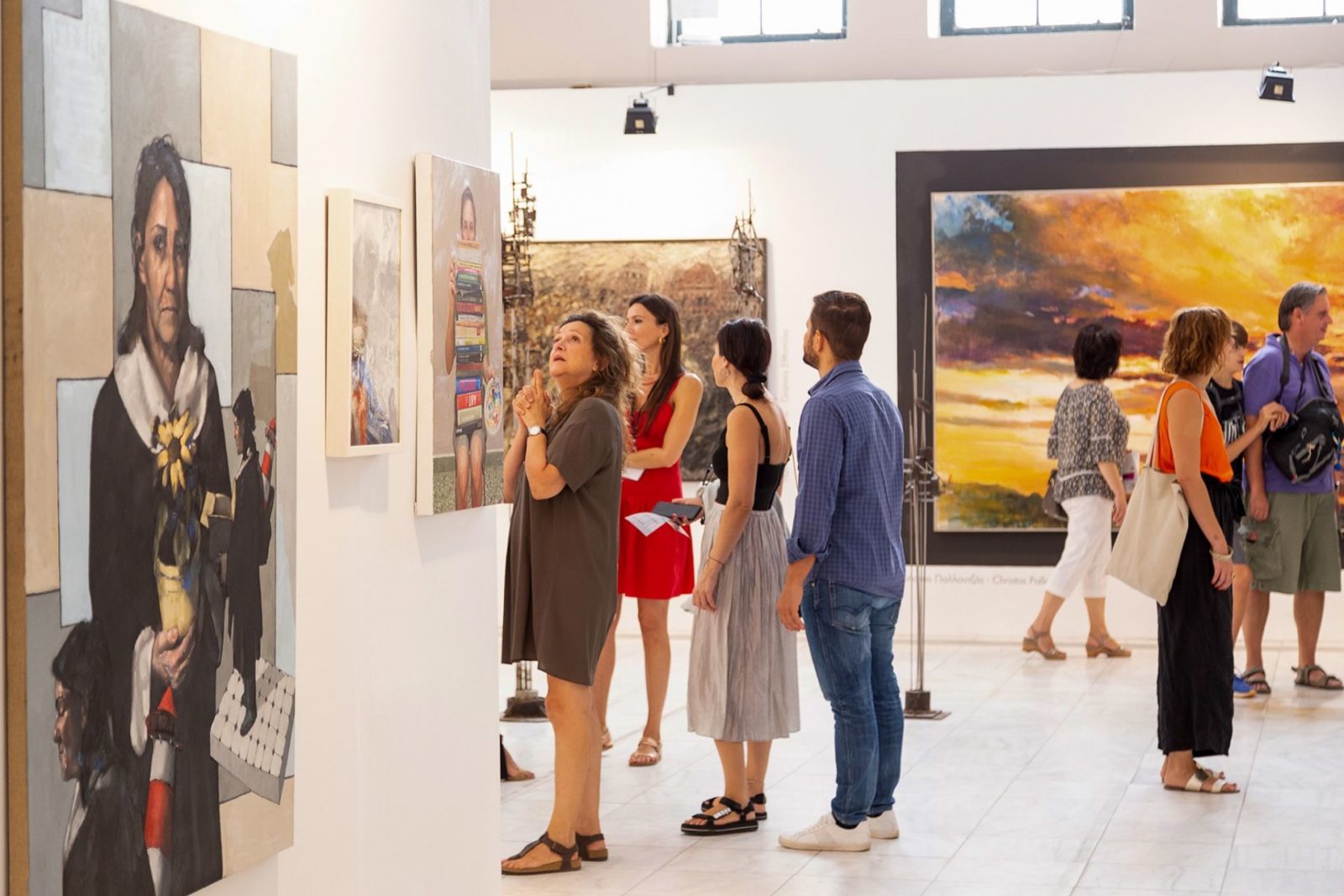 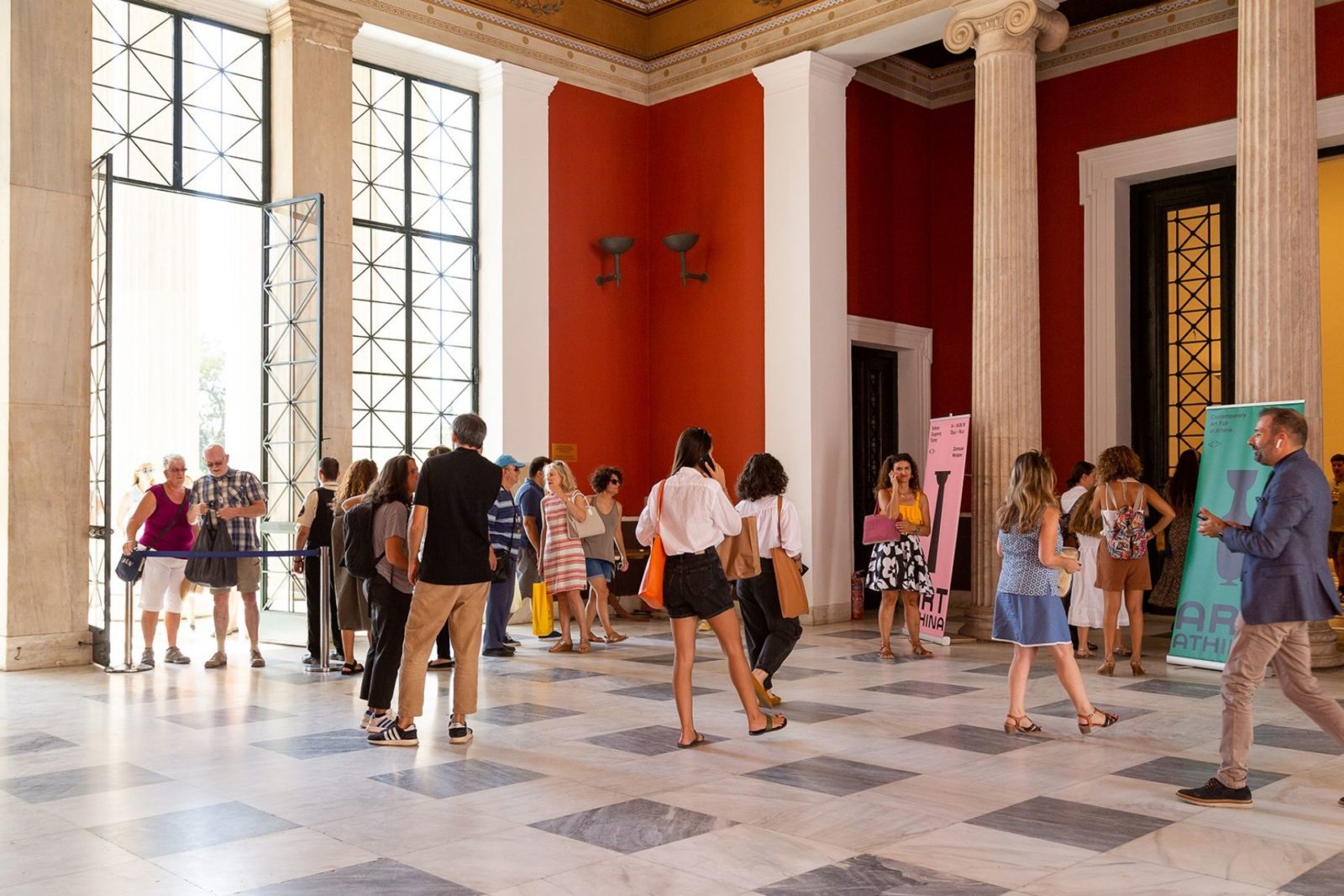 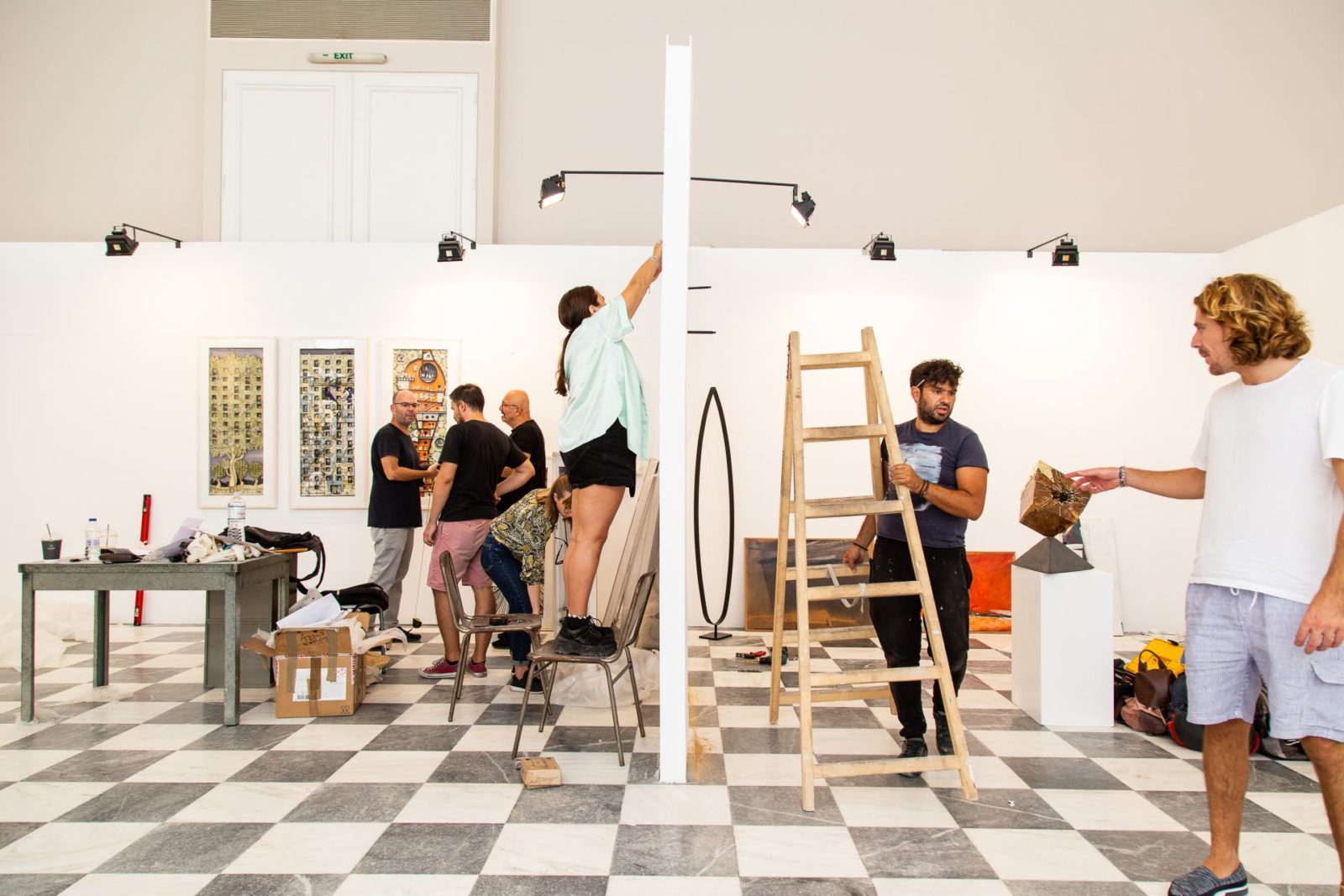 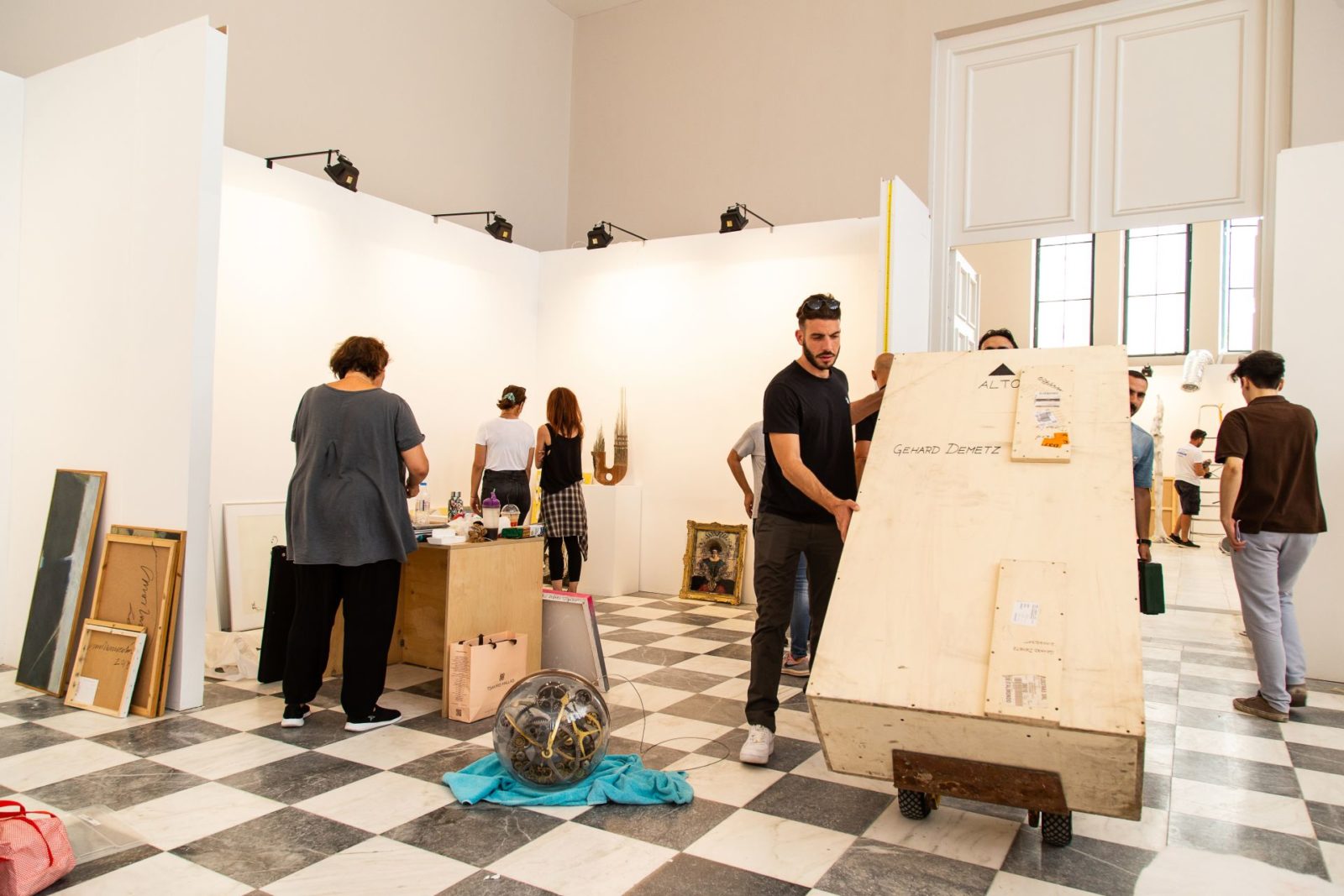 But Art Athina was not without some serious hiccups along the way this time round, ending in the splits: elections, bureaucratic stalling and renovation works at its original choice of venue (the historic Art Nouveau building that was once the Akropol hotel, on Patission Avenue), prevented the fair from taking place in its entirety in June. In order to save face, the organisers had to create a Pop-up event (at some empty offices on Aiolou Street), for the foreign galleries who had planned to fly over already, while those who could re-plan for September, made it to the current venue at the Zappeion Megaron. But as the Greeks say: ‘every obstacle is for the good’, because the Zappeion Megaron’s classical grace, was the perfect contrasting backdrop to Art Athina’s contemporary creative play.

A stalwart supporter of Art Athina, who has participated for the last seven years, is Melbourne’s Anna Pappas gallery. At the inauguration, Anna Pappas told me why she keeps coming back: “Firstly, because I am an Athenian, I was born here and I went to school here. I support Art Athina and have been doing so for 7 years. The clientele here is of the highest you can get, with collectors and people who have knowledge about art. In terms of sales, I have always sold at this fair. I have not necessarily sold at Melbourne’s art fair, or at Sydney’s, but have always sold at Art Athina.”

Pappas is a supporter of Greek art and, at Art Athina this time, she presented the work of Yioryios Papayioryiou – a 3rd generation Cypriot-Greek Australian from Sydney, who has recently moved to Athens. “But it has to be good art, not just because it is made by a Greek”, she stated, adding that “I don’t call Greek art Greek, because art is art. Art Athina is Greek, but the art here is individualistic, because art doesn’t necessarily have a country of origin. The contemporary art that exists in Athens, is of a very high standard and there are galleries here such as The Breeder and Kalfayan who travel to art fairs around the world. I meet them wherever I go. Then there is the middle ground, the galleries in Greece that sell works that are easier to live with, less risky, less exciting in contemporary terms. But it’s the same everywhere.”

Pappas was the President of the Australian Galleries Association for nine years, and of the Melbourne Art Fair for 4 years: “We had 45 galleries tops at Melbourne’s art fair, so Art Athina has done well, and we’re very happy here at this beautiful new venue.” 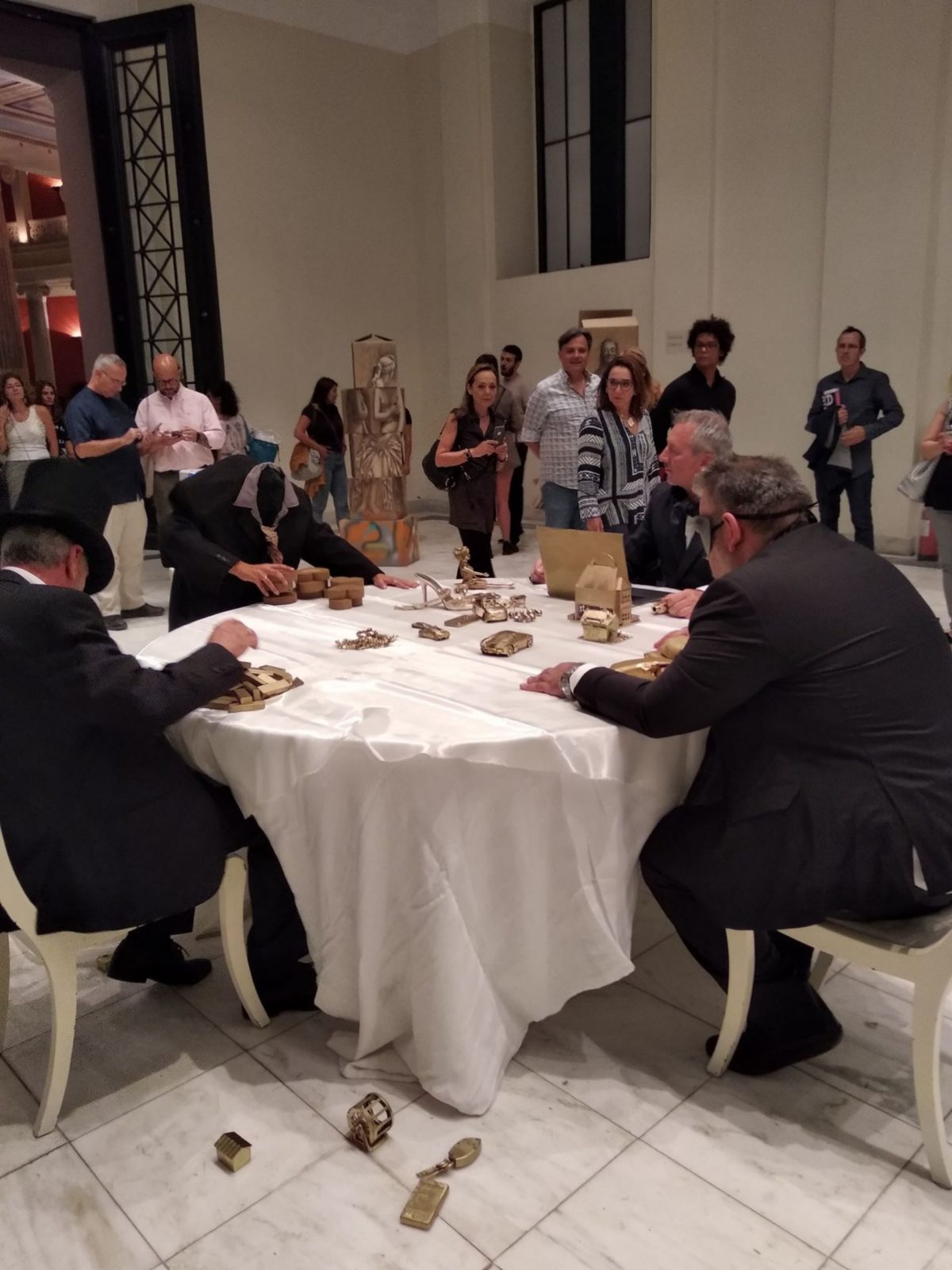 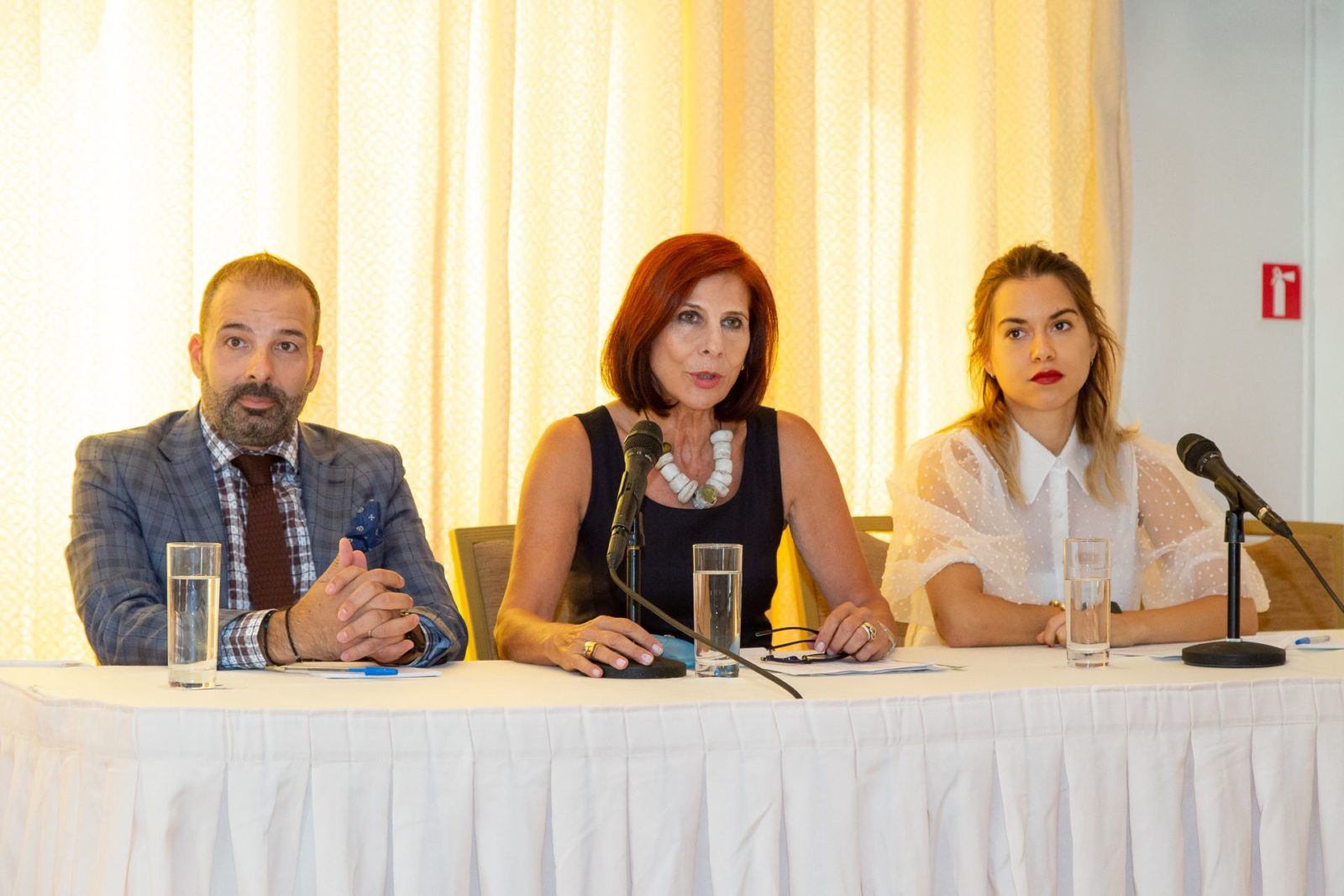 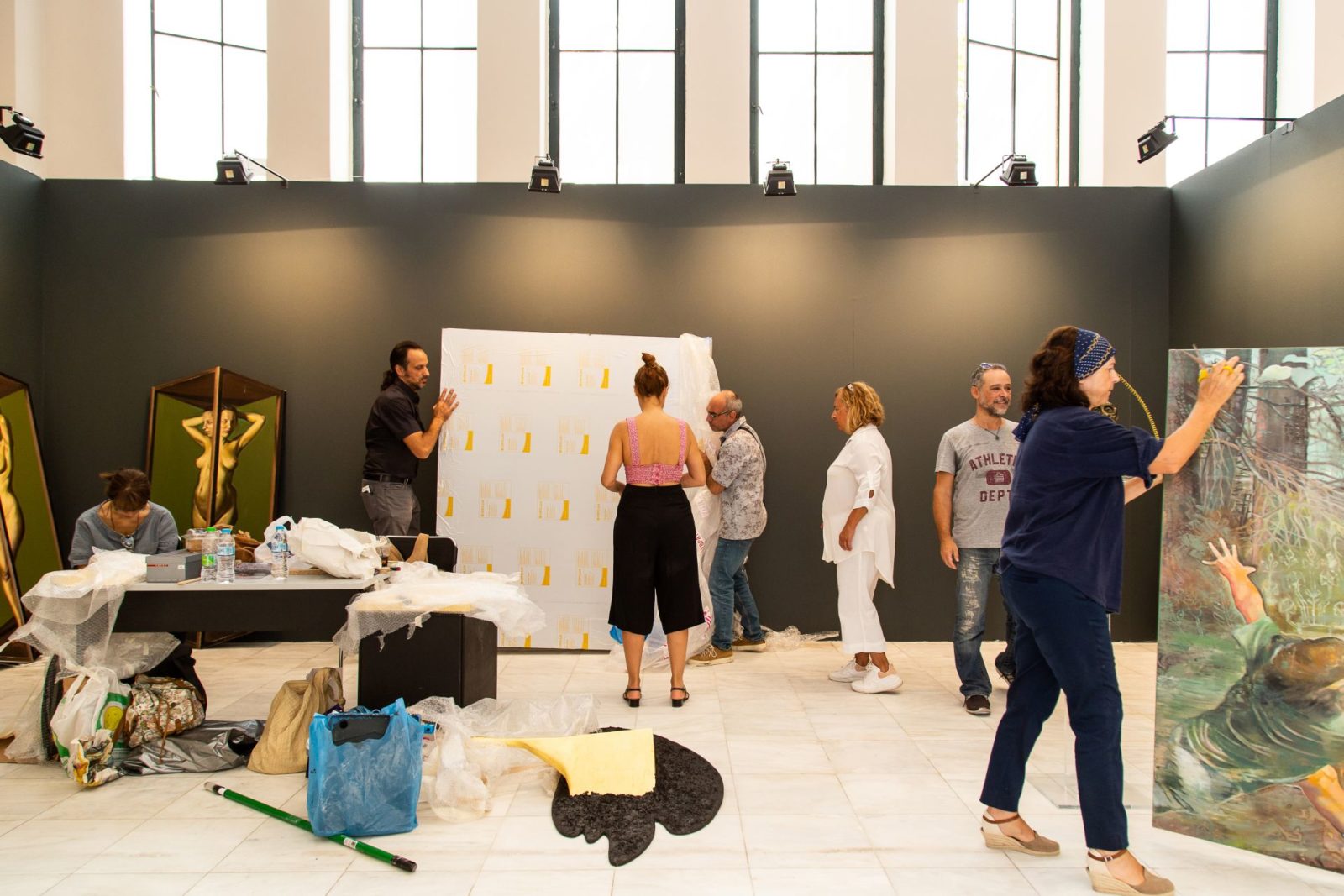 Artist Papayioryiou explained to me the concept behind his black works: “They’re predominantly black, but there’s more line and colour in them which overpowers the black once you see it. It’s only at certain angles that you get to see the glimpses of colour. I’m using Byzantium pigments which are used for icon paintings, and they create a greater depth in the colours.”

The artist also enthused about his new home, Athens, and how he had fallen in love with the place after doing an artist’s residency here. Moving to Athens was something that he had wanted to do for a while, and when asked how he’s dealing with the ‘Greek chaos’, he replied unperturbed and smiling: “It’s an organised chaos.”

Also at Art Athina, was Stavros Mihalarias, the renowned restorer/art dealer, whose art spaces in Kolonaki, Kifissia and Malakassa have played a pivotal role in the promotion of Greek art both here and abroad. In an exclusive interview for Neos Kosmos, Mihalarias spoke of the Greek artists as being the bad boys of the international art market, because they don’t go by the rules. He sees this as being the main reason why there aren’t so many Greek artists’ names on the international art scene. The booth of Mihalarias Art this year, was dedicated entirely to Takis, the internationally-renowned Greek artist who passed away recently (August 9), but who’s exhibition at London’s Tate Modern runs till 27 October 27.

• Find out more about Takis, the ‘magician of electromagnetism’, the value of Greek art on the international market and about the reputation of Greek artists, in the exclusive interview with Mihalarias.