Celebrating the 200th anniversary of Greek Revolution with Playmobil figurines Playmobil on parade, a fun way to learn about Greek Independence at the National Historical Museum in Athens.

2020 marks the 200th anniversary of the Greek War of Independence, which began with a proclamation of revolution against Ottoman rule in the Peloponnese on 17 March, 1821. To celebrate the occasion, the National Historical Museum in Athens has launched a fascinating program of events that kicked off last year and continue through to 2021.

The National Historical Museum’s deputy director Maria papanastasiou states that these events are aimed at “reintroducing the Greek and international public to the ideas, causes, people, events and consequences of the 1821 war.”

Among the series of events, is an original exhibition titled 1821 Through Different Eyes, which was inaugurated on Sunday, 13 October, 2019 by the Greek Culture and Sports Minister Lina Mendoni. The exhibition, running through to May 2020,  features more than 20 dioramas consisting of nearly 1,300 Playmobil figures, depicting important events of the Revolution, but also of everyday life of the early 19th century in Greece.

Historical moments brought to life include the Exodus of the Pargans, the Siege of Tripolitsa, the Battle of Maniaki and the Exodus of Mesolongi. More than 80 Revolutionary personalities in the War of Independence – including Greeks, Philhellenes and the Ottomans – are presented along with their biographies. Among them are Laskarina Bouboulina (the first woman to be awarded the rank of Admiral posthumously for her war services), Greek Generals Theodoros Kolokotronis and Markos Botsaris, as well as Filiki Eteria leaders of the secret organisation founded in 1814 in Odessa, whose purpose was to overthrow the Ottoman rule of Greece and establish an independent Greek state.

At a press conference that took place on Tuesday, 15 October, 2019, the Head of the National Historical Museum Efthymia Papaspyrou pointed out that “historic events do not change but the time that passes changes the way we view and project them. They are represented in art with a fresh and more creative outlook, utilising modern methods that make them more accessible and attractive”. At the same conference, Irene Efremidis, marketing director of Playmobil Hellas, said that the realisation of the exhibition was a complex and difficult dream come true, adding that its purpose will have been achieved “if it even slightly helps some of the visitors connect with their history, take a brief look at the past, and become a little more interested in what happened 200 years ago.”

The dioramas were built by collectors Giorgos Angelidis, Denis Vagopoulos, Angelos Giakoumatos and Vassiliki Fato, while the historic figures were made by Stelios Mylonas. They all worked on the project pro bono, while the exhibition is designed and supervised by three National Historical Museum curators: art historian Natassa Kastriti, archaeologist Panagiota Panariti and historian Regina Katsimardou.

READ MORE: Greek Independence Day Parade is no place for fascists or neo-Nazis

“The idea came about as a result of Petros Kaminiotis’ work” they say, referring to a young artist who created a series of customised Playmobil figures dressed in traditional Greek folk costumes, adding that “the inspiration for the composition of the dioramas and for using Playmobil figures to depict historical figures came mainly from works of art – engravings and paintings – from the early 19th century in the museum’s collection and elsewhere.”

“This is the first time in Greece that an attempt was made to depict the 1821 Greek War of Independence with Playmobils and dioramas, and the first time an exhibition like this is shown in such a museum. We were impressed when we discovered the possibilities Playmobil offers in 3D installations,” Kastritis said at the press conference.

The show aims to present an original, eye-catching and informed approach to the period that is directed mainly at children and -needless to say- the dioramas, in which people are depicted by Playmobil figures, are sure to do the trick. At the same time, the show also represents an opportunity to change the museum’s image. As Katsimardou said: “Sure, school pupils know about it, but we don’t want it to be associated only with compulsory school field trips which can be, admittedly, boring at times. We want to show our young and older visitors that history can be fun and that we’re not the stuffed shirts they may think us to be.” 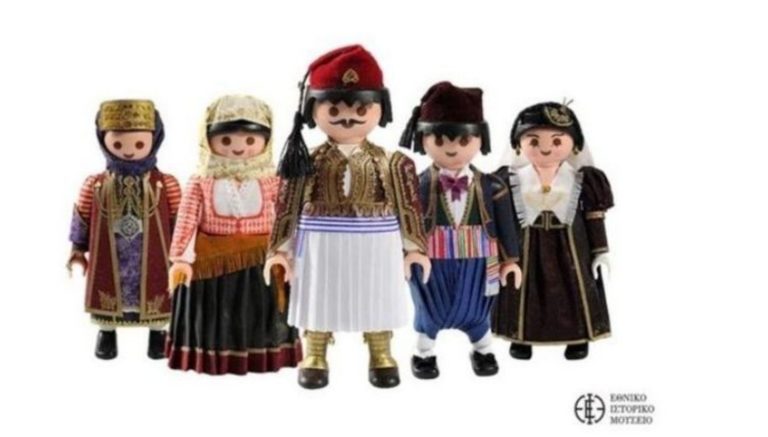 The National Historical Museum was founded in 1882 and was the first museum in the newly liberated Greek State. Since 1960, it is housed in the Old Parliament Building at Stadiou Street (Kolokotronis square). The Museum narrates the history of Modern Greece: the period of Ottoman and Latin rule, the Greek War of Independence (1821), the liberation struggles, the creation of an independent state, the political, social and spiritual development of the Greeks up to the present day.