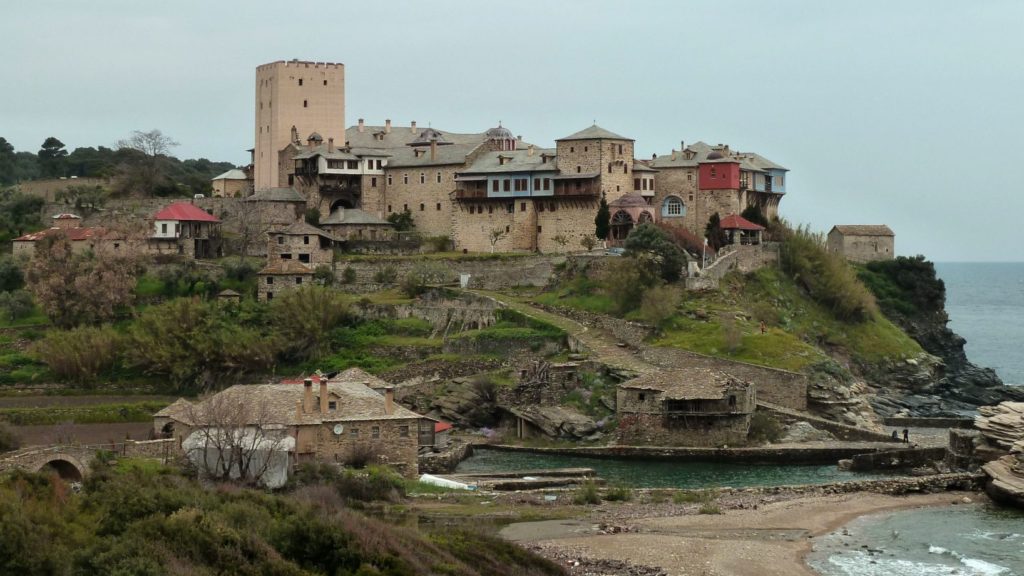 The Pantokrator Monastery with the chapel of St Athanasios on the extreme right of the monastery buildings, above the sea. The bones of a woman were found under the chapel floor during restoration work done there earlier this year. Photo: Aroche/WikkiCommons

Archaeologists are eagerly awaiting the results of tests to date the bones of a female found beneath the stone floor of a chapel in a monastery in Mount Athos – the monastic republic that has been a male-only preserve since the 10th Century.

The mystery of the woman’s remains, found amongst the bones of possibly six males, was unearthed when architect restorer Phaidon Hadjiantoniou was conducting conservation work in the chapel of St Athanasios that is part of the Monastery of Pantokrator.

“If a woman is found among the bones it will be the first known incident of a female finding her final resting place on Mount Athos,” Mr Hadjiantoniou told The Guardian newspaper.

“This is the first time I have ever seen bones placed under a chapel floor. I was immediately curious and got in touch with specialists, including Laura Antikas-Wynn (an American anthropologist and bone specialist). What is sure is that they wouldn’t be there if these people were not significant to the monastery,” he said.

“There are times during pirate raids and hostile incursions that monks are known to have opened their doors to women but it is very rare. There is the famous tale of a Serbian king who brought his wife to Athos but, throughout, she was carried and never allowed to step on Athonite soil. Carpets were placed in all monastery rooms to ensure that even there she did not touch the ground,” said Mr Hadjiantoniou.

Women have not been allowed on Mount Athos since the 10th century – apart from cats, all female animals are also barred. When Mr Hadjiantoniou, who has been doing restoration work in the region for the past 40 years, discovered the bones, he was instantly in “detective mode” and called Ms Antikas-Wynn.

She found at least seven individuals had been re-buried beneath the chapel’s stone floor. No skulls were found in the pit but seven jaw bones were discovered.

“Secondary burials, like this one, are not easy because the bones have been moved from their original burial, so information has been lost. But it also tells us that these people were important enough to dig up a floor of an important church and place them there. That takes a lot of effort by the living,” said Ms Antikas-Wynn. She added that it was a mystery as to when the remains were moved in the first place and it was evident that care was taken in transferring them. Smaller bones that could easily have been overlooked  – including ossified thyroid cartilage – were among the fragments found.

She said she had been surprised when she examined the bones. Some were so small that they bore little resemblance to a man’s remains.

“Among them were a forearm, shinbone and sacrum that were just so different in their morphology. Others were more robust and had clearly belonged to the frames of men, these had measurements that noticeably fell in the range of female. They were markedly different in size,” she said.

The bones were wrapped in aluminium foil and transported to the Demokritos Research Centre in Athens in the northern autumn. Greece’s foremost leader in archaeological science, Dr Yannis Maniatis, will conduct cabron dating to determine the date of death – a process that will take up to three months.

“If we can date the bones to a time relevant to events that are both specific and known then DNA testing will become necessary to confirm whether, as seems likely, a woman is among the buried.” said Dr Maniatis.

Ms Antikas-Wynn said: “Once we get the dating, another piece of the puzzle will have been solved. It will be crucial to giving us information about who these people were.”