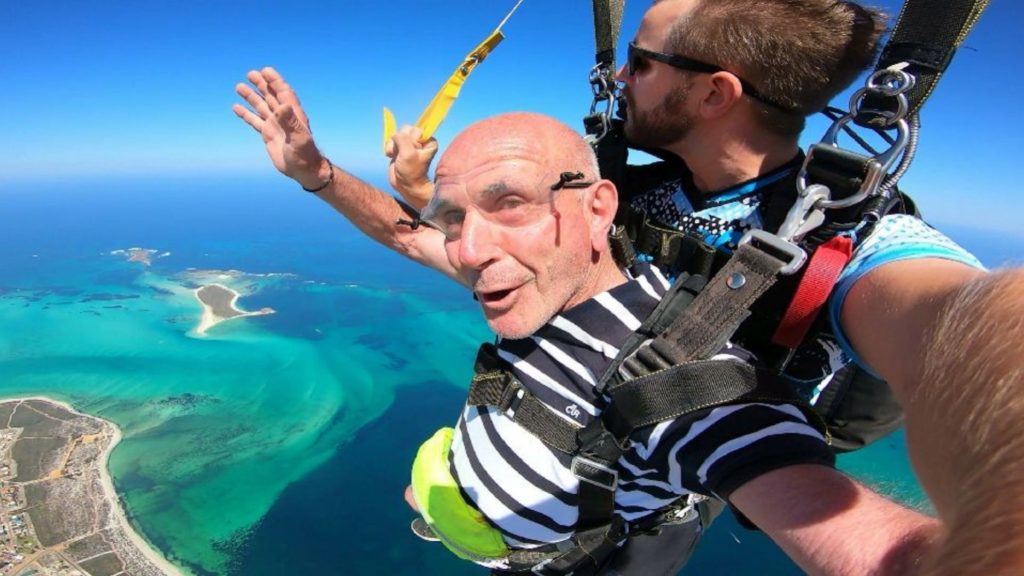 Just shy of 80, Greek Australian Kleanthis Karelis has realised a dream of his, free falling from 14,000 feet without a parachute. Photo: Supplied

Just shy of his 80th birthday, Greek Australian Kleanthis Karelis has realised one of his dreams, skydiving from 14,000 ft over Jurien Bay in Western Australia.

Speaking to Neos Kosmos, he reveals the only thing that scared him a little was the plane.

“We were falling for 60 seconds without a parachute and it was a fantastic experience,” describes the fearless grandfather.

The experience was a gift from his son George for Mr Karelis’ upcoming 80th birthday.

Despite his evident love for life, Mr Karelis had a quite a challenging start. Born in Serres, Greece in February 1940, at just two his father was killed, and soon after his mother passed away. An uncle took him into his care, but with Greece experiencing the effects of war, poverty and hardship, at six he was given up to a Children’s Home in Thessaloniki, before being relocated to an orphanage.

At 18, Mr Karelis was pushed out and left to fend for himself. He found refuge in abandoned train carriages for two years before joining the army. It was in 1964 that he made the decision to board the Patris, migrating to Australia along with thousands of other Greeks.

His first stop was the Bonegilla Migrant Reception and Training Centre in Victoria, but a love of sports would soon take him to Perth.

“We were getting ready to go into town when an announcement was heard over the loudspeakers calling for all those interested in playing football for a Greek team named ‘Athena’,” recalls Mr Karelis who was one of the people to put up their hand. From that day on, he has been involved with various sporting clubs, and exercises daily.

For the past 10 years he has been taking part in the HBF Run for a Reason. In 2016 he received media attention for his participation, running in the traditional Greek outfit of a tsolia, reviving the spirit of marathon runner Spyridon Louis.

A breath away from his 80’s, Mr Karelis wakes up each day at 3.00 am and runs three kilometres to the bus stop in the direction of the city, where he continues to work a few hours a day.

“I can’t describe how refreshing running in the morning is. My lungs fill with the smells of nature,” he says, before locking in an interview with us for the next skydive he is already planning, but this time with his son George in tow – he will be returning the favour on his son’s birthday, a shared experience to remember.