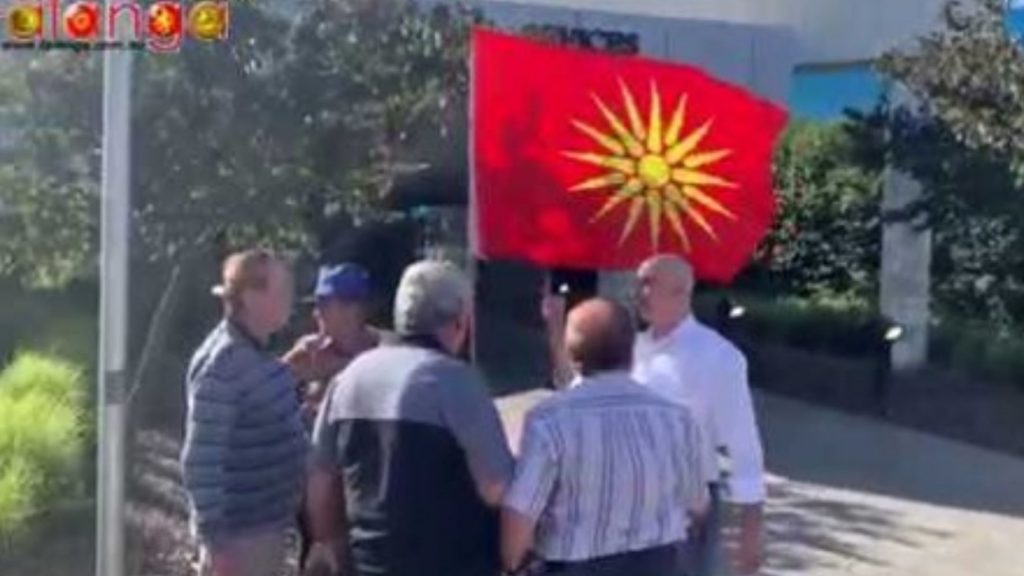 There was strife surrounding the Whittlesea Council meeting again on Tuesday night as sixty people squeezed into the council chambers to “support” Mayor Emilia Sterjova.

Once again, Mayor Sterjova’s family members were present, but apart from one occasion where Cr Sterjova asked her “supporters” to quieten down, the meeting on local issues proceeded as usual – at least, indoors. Outside, a group of around eight men took a red flag featuring the sun of Vergina and tried to hoist it on a bollard alongside the Australian flags.

A Whittlesea Council official asked the men to take down this flag from outside the council in a video uploaded on social media. “Could you put this flag down please?” he asked. “This is Council property.”

His request was met with abuse as the elderly men yelled out to him: “idiot”, “bloody bludger”, “go away”, “don’t provoke us”.

Standing nearby, Whittlesea Council’s security guard could be heard conversing with the men. “That’s my flag. I’m Macedonian too,” he said in reaction to the flag hoisting.

The police arrived and asked the men what was going on. “We’re here to support the mayor. Some idiot contacted the Macedonian mayor, she’s a smart girl,” said one of the men, however he was not aware of what was on the agenda of the council meeting to warrant his presence or even protest action.

In the days prior to the 4 February council meeting, a message had been circulated on the North Macedonian Facebook page known as ‘Macedonian Worldwide’ calling on its members to attend the council meeting though the Council agenda did not indicate any issues of Greek-North Macedonian interest. The message read: “Emilia needs our support, she has been attacked by Greek nationalists for carrying Macedonian old flag at a private function. Final decision will be on Tuesday. We need you there.”

Cr Pavlidis told Neos Kosmos that she has felt attacked by some members of the North Macedonian community.

“It has been confronting. It’s not just me as a Greek who has been impacted, but several Councillors of non-Greek descent have also been affected by the racial tension,” Cr Pavlidis said. She adds that she has attended many North Macedonian events and had spent years building ties with all ethnic groups in the community that had been “mutually respectful” and conducted in a professional manner.

She feels that the negative developments at Whittlesea Council threaten to pull apart her work at fostering unity.

“In all my years as an elected official – this is my 15th year – I have never experienced this type of community conflict in such an overt, hostile and aggressive manner,” she said.

“The mayor who also identifies with this (North Macedonian) community as a ‘proud person of that community’ has a pivotal role in addressing the issues with the members of the community who have been hostile and have a discussion with them, telling them that they need to refrain from this sort of behaviour,” she said.

Local citizens group, Whittlesea North Ward Matters, said that the Council has become a “disgrace”. “It is time the State Government sack this Mayor and the Council,” called the group on its Facebook page.

The severity of the issue could be seen during an assault which followed the last council meeting when a Greek man was bashed by a mob. Police have found one of the men involved in the incident, while another two men responsible are still being sought.

Neos Kosmos has repeatedly tried to contact Whittlesea Cr Mary Lalios and Mayor Emilia Sterjova, however we have not received a comment from either at this point.