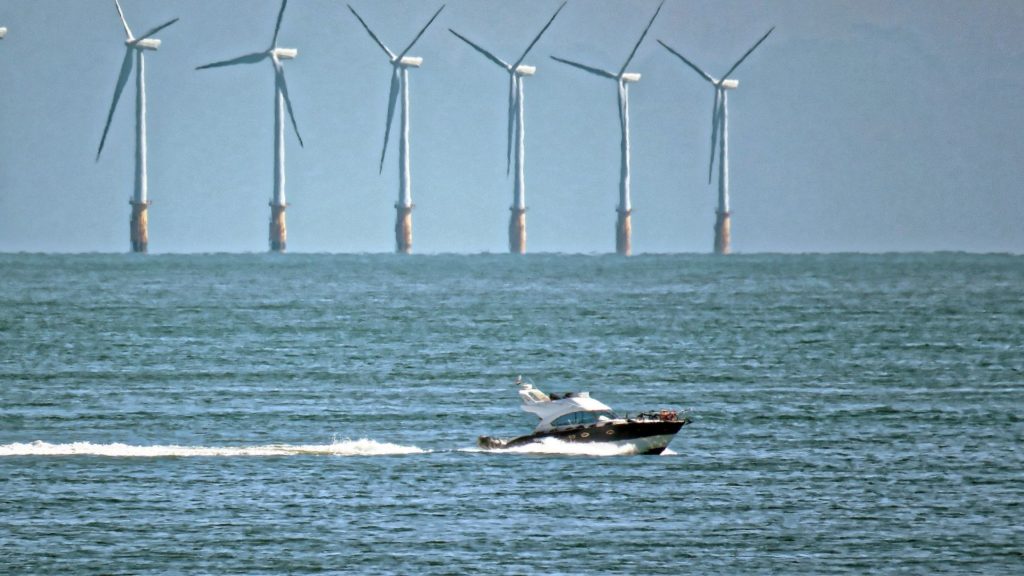 A boat races past a line of offshore wind turbines. Photo: Acabashi/WikiCommons

A Greek innovation is offering huge savings in the offshore wind energy field and has received a European Commission award a two million euro funding grant.

The Floatmast, a floating tension leg platform (TLP) designed by ETME Peppas & Associates with Streamlined Naval Architects, has caused a stir because it offers an accurate yet cheaper way to accurately test for wind prevalence before setting up offshore wind turbines.

“An offshore wind farm is a big investment and this is why it is of crucial importance to precisely measure the wind field prior to its installation. A false valuation (that is) off by 2-3 percent can potentially cost millions, hence we seek maximum precision,” Antonis Peppas, managing director at ETME Peppas & Associates.

Ekathemerini said that taking wind measurements at sea is tricky. Two methods tend to be used: The accurate but expensive way is to install a measurement tower (met mast) which is attached all the way to the sea bed. The second cheaper but far less accurate way is to use floating buoys containing LiDar laser sensors.

“The question for us was to combine the met mast’s reliability with the cost and the logic behind the floating buoy. This is what the innovation consists of, as well as our patent. Floatmast is an offshore floating platform built to the strictest criteria worldwide on wind measurement, lowering costs for investors by 60-70 percent but with the same quality output,” said Mr Peppas.

The Floatmast, which borrows from TLP technology used for oil platforms, is a 40m high met mast with LiDar sensors that are effective for up to 200m to record wind data. As with an oil platform, the Floatmast is tethered to four anchors lying on the sea bed and powered by a solar array to power the meteorological and environmental sensors on the mast.

With this equipment attached, the Floatmast can measure wind speed at heights of between 20 to 210 metres, as well as wind direction, temperature, humidity, atmospheric pressure, wave height and intensity, seas salt levels, sea temperature and chlorophyll levels.

“Our innovation’s utility value lies in the fact that our device can measure the wind blowing in a particular area with the greatest precision, allowing the investor to know exactly how profitable the offshore wind farm construction will be,” said Mr Peppas.

“At the same time, this floating structure is a complete maritime weather monitoring station, as it is equipped with a great number of sensors – blue and green – aimed at the environmental observation of the sea. This system can be installed before or during the construction of the offshore wind farm, and it can remain while the system operates, constantly monitoring the environmental parameters in a holistic way,” he added.

For the past five months the system has been tested on the waters between Andros and Makronisos where strong winds and seas are the norm. Floatmast will be tested for a full year.

“Even when wind gusts rose to 11 Beaufort, it remained steady as ever, with a slope degree of less than one,” Mr Peppas said.