On the trail of the Greek philosophers

Stavroula Kostarakis, a modern philosopher, ponders on the great minds of ancient Greece 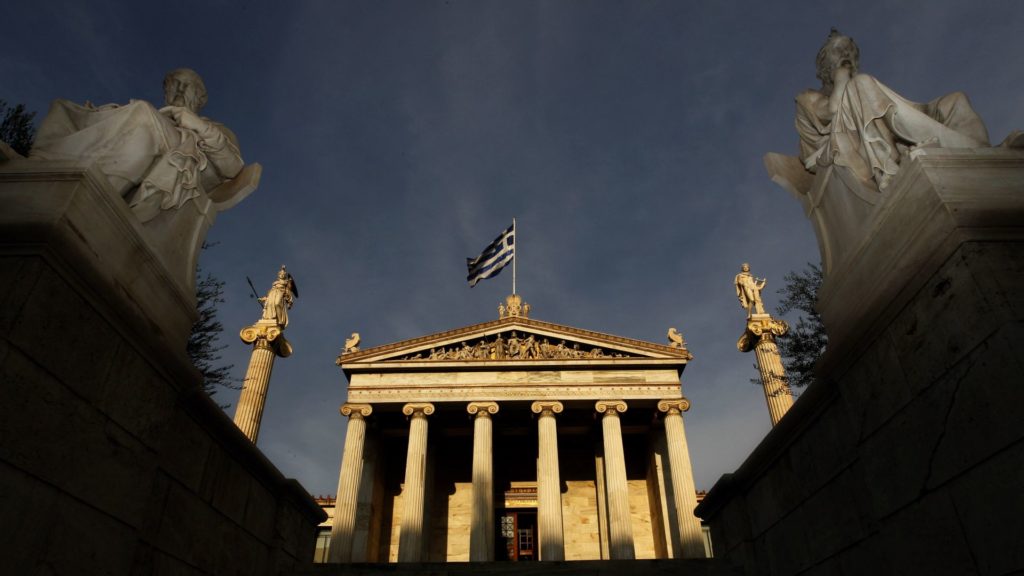 Marble statues of ancient Greek philosophers Socrates, right, and Plato, left, are seen on plinths in front of the Athens Academy, as the Greek flag flies. Photo: AAP via AP Photo/Petros Giannakouris

“Ti! What job can you find with that?” exclaimed my horrified parents.

That was in response to my announcement that after finishing my undergraduate degree I was going to enrol in a post graduate course majoring in Philosophy. For me it was a natural progression but for them it was a disaster. They didn’t leave their homeland, travel half way around and then work night and day in factories so that I could waste my time studying “Philosophia!” I was supposed to become a doctor or a lawyer.

“Jeepers,” I replied, “the Greeks invented philosophy! Why aren’t you embracing your Ancient Greek roots?”
For me, university opened up the doorway to learning everything about the ancient Greek philosophers, namely Socrates, Plato and Aristotle. My parents did not share my enthusiasm.

Fast forward twenty years and with my Australian husband in tow we landed in Athens for our first Greek holiday and one of many more to come. We were going to see the lot! Everything that Athens had to offer, as well as the ancient sites of Delphi and Olympia and the Peloponnese villages my parents grew up in. And to top it off, a stint in Crete, the largest island in Greece.

Arriving in Athens on that hot August morning we didn’t care about being jet-lagged. We had touristy things to do. We told my relatives that we’d be back after their siesta. The Greek afternoon nap ritual seemed like torture to us.
We were off to see the most famous site in all of Greece, the Acropolis of Athens. I vividly remember walking out of the cool Acropolis metro station into the heat and blinding sunlight of the Athenian summer, then turning left onto the pedestrian mall and being awestruck by the monolithic Acropolis and atop it the magnificent Parthenon, one of the world’s most famous architectural and archaeological marvels gleaming in the afternoon sun. We followed the procession of sweating tourists all heading to the entrance gates as we picked our way along the cobbled roadway with the deafening drumming of cicadas drowning out our thoughts. I couldn’t take my eyes off the breathtaking Parthenon above.

The easiest way to get to the Acropolis is to take take the metro to the Acropolis station, which is a 5-minute walk from the south east entrance. Comprising several ancient structures, the Acropolis of Athens is accessible with a €20 ticket (reduced to €10 during the off-season: 1 November to 31 March). A €30 ticket is also available and gives access to six other archaeological sites including the Ancient Agora.

During the summer, make sure to visit the site early in the morning; due to its location, there isn’t any shade, and it can get very hot up on the hill. Also, try to avoid visiting the site when it rains and in any case wear good walking shoes. I learnt the hard way the first time wearing my sandals and finding the rocks very slippery and tricky.

The Acropolis site needs your full attention early in the morning and climbing the steps up to the top to is all worth it. And yes, there are many Greeks who haven’t been there themselves.

It is in these ancient ruins where I imagined the Athenian philosophers of old would ponder the deep mysteries of life, leaving a legacy of wisdom that has endured for two and a half thousand years.

So who were these men and why get so excited about them now? Well all I can say is that if you had five minutes with one of them I’m sure you’d be inspired to question the meaning of life too!

Socrates is remembered for sayings such as, “An unexamined life is not worth living” and “He is richest who he is content with the least, for contentment is the wealth of nature”. You can only imagine that Socrates was not interested in any idle chatter from his countrymen!

One of Plato’s pearls of wisdom which is so relevant in the 21st century is this: “One of the penalties of refusing to participate in politics is that you end up being governed by your inferiors.”

And much later Aristotle who had to flee Athens after the death of his teacher Plato and fearing for his life wrote, “It is during our darkest moments that we must focus to see the light”.

These three main philosophers all lived what is known as the Classical or the Golden Age of ancient Greece.
It was a time when the Olympian gods were in full celebration and the Parthenon was built in dedication to the goddess Athena. When you look at the Parthenon temple today you have to envisage how it looked then. The astounding beauty of it’s white marble columns encased the temple containing a 12-metre high golden statue of Athena. Her temple painted in green, blue and red showed the rest of the world that Athens was protected with her wisdom and power.

Athens then was a vibrant, bustling place full of ideas and energy. It is said that everyone knew of each other by their first names when mingling in the Agora or at the temples and festivals. There were aristocrats and poor people, thinkers and followers, idealists and pragmatists, devotees of the gods and agnostics.It was in this melting pot that Socrates came to the fore.

Socrates (469 to 399 BC) is considered the father of western philosophy. Interestingly, he never wrote anything down and yet his words have had a big impact to this day. He spent all of his days talking and questioning his fellow Athenians in the market place or Agora about the meaning of life and never exchanged money for his teachings. He didn’t actually call himself a teacher either. The great philosopher believed the most important pursuit anyone could have was to understand one’s self. He did not care what people thought of him and when the Athenian government falsely accused him of irreverence towards the gods in a public trial the jury found him guilty. It was partly the manner of his death that gained him so much notoriety and enshrined his place in history.
Socrates was given the choice of either exile or drinking the poison hemlock. Courageous to the end and not willing to compromise his beliefs he drank the poison in front of the Athenians he had spent his whole life educating.

Socrates in his final words to his Athenian brethren was reputed to have metaphorically compared earthly life to a sickness from which he was about to be cured by dying.

Plato (428 to 348 BC) came into his own following the death of Socrates. He was a young boy from an aristocratic family when he first met Socrates in the Agora of Athens where the latter spent most of his days philosophising. Plato was 25 years old when Socrates was put to death. This single event in Plato’s life greatly influenced and inspired him to set up his own Academy, traditionally considered the first university in the western world. He wrote down everything he had learned from his teacher, Socrates, and these works or dialogues are still being studied today. Plato wrote about many topics including politics, metaphysics, ethics, religion, mathematics and art. He had the belief that we have immortal souls. He also taught that the most correct use of love of human beings is to direct one’s mind to divine love and this is where the term “Platonic love” comes from. Plato’s most famous work is “The Republic”, which envisaged a wise and just society run by a philosopher. And this is when Aristotle enters in Plato’s life.

Aristotle (384 to 322 BC) arrived in Athens from Northern Greece (Macedonia) at the age of 17 to enrol in Plato’s Academy. It was here that his thinking was shaped as he studied under the great Plato. In time Aristotle became a prolific writer on a range of topics from animal and plant biology, logic, psychology, metaphysics and of course philosophy. At the age of 47 he began tutoring the young Alexander the Great at the request of Alexander’s father, Phillip before Alexander went on to conquer the known world.

In terms of walking in the footsteps of the philosophers in the city of Athens you will be enriched firstly to visit the Acropolis museum which – with its nearly 4,000 exhibits – is undoubtedly one of the most important museums in the world. It attracts more than 1.5 million visitors each year and my tip is to spend a day in there first brushing up on your history before you head up to the Acropolis and Parthenon.

There is also the Ancient Agora site (included in the Acropolis ticket) which is the green area beneath the Acropolis. From the Agora you are right next door to Plaka and Monastiraki districts, the eating and shopping meccas for tourists.

READ MORE: Socrates to be put on trial once again

And if you want to connect even more with Aristotle’s wisdom, a recent archaeological site (2014) has been opened up, the Lyceum. Here Aristotle started his school and library offering free lectures to everybody. You can sit in the beautiful gardens with pathways and nature and contemplate life. It is located in downtown Athens, by the junction of Rigillis and Vasilissis Sofias Streets, next to the Athens War Museum and the National Conservatory. And best of all it has free entry, just like Aristotle would have wanted!

So next time you are in Athens take a moment to sit in a kafenion in Plaka or at the bottom of the Acropolis and think what you would want to have discussed with these wise men of ancient Greece about the meaning of life.
I’m sure you won’t be disappointed with their answers!

One final thought from Aristotle which we would all do well to meditate on in this troubled world is this, “Educating the mind without educating the heart is no education at all.”