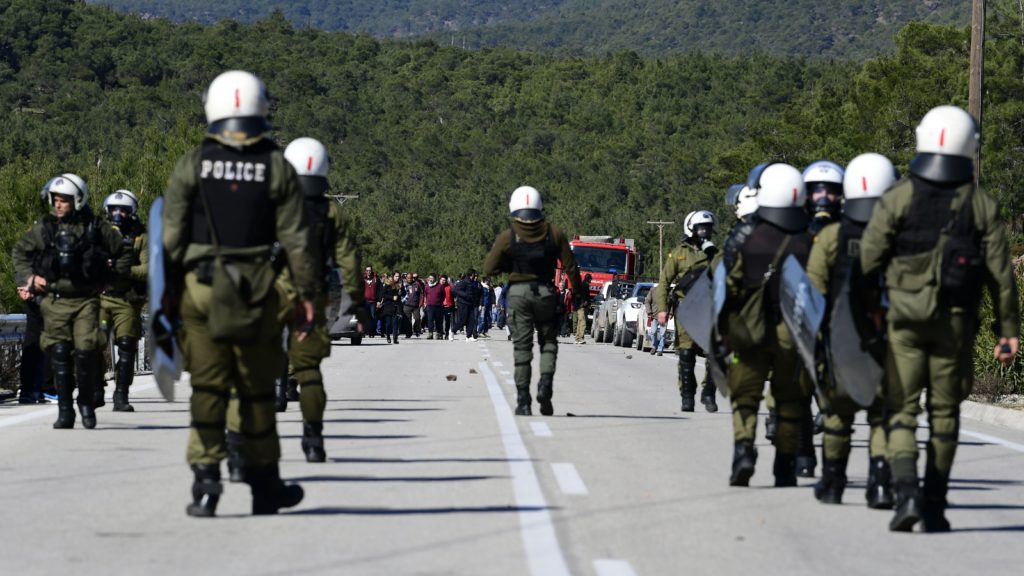 Riot police block the protesters during a rally in Diavolorema near the area where the government plans to build a new migrant detention centre, on the northeastern Aegean island of Lesbos. Photo: AAP

Greek riot police clashed with residents of the Greek islands of Lesbos and Chios on Tuesday, according to news reports.

On the island of Lesbos, trash bins were set on fire and local garbage trucks cordoned off the port area.

Crowds dispersed after police fired tear gas. On Chios, flash grenades were also used. Three people, including the island’s mayor, were taken to hospital after experiencing breathing difficulties as a result of the tear gas.

Greece’s conservative government is determined to move ahead with plans to build the new facilities following the squalid conditions in current camps where severe overcrowding has worsened.

READ MORE: Greece condemned for plans to build a floating barrier to deter migrants in the Aegean

Locals argue that asylum seekers should be moved to the mainland following the huge strain they have placed in recent years.

Following the conflict, North Aegean municipalities have called for a general strike on Wednesday (local time). North Aegean regional governor Kostas Moutzouris headed a meeting held in Mytilene where stakeholders assessed the situation and denounced the ‘barbarous and extermely aggressive government action to send riot police to the islands of Lesbos and Chios to impose their violent transformation into new prisons, in defiance to the will and dignity of the islanders.” The government was also condemned for attacking “defenceless civilians” and blocking roads.

“It is a day of shame for all and mostly for those who ordered these actions. It is a shame for the islanders to be beaten and to suffer from tear gas. Not even the junta did these things,” Mr Moutzouris said.

Greek government spokesman Stelios Petsas argued that authorities were forced to use tear gas to impose order and that the new camps are necessary.

“We understand that there is a problem of trust that was created over the previous years,” he told ERT TV, the state broadcaster. “But the closed facilities will be built and we are calling on the public to support this.”

Mr Petsas added that heightened concerns over the coronavirus also increased the necessities for the camp so that the proper health checks could be carried out.

Greece is the busiest entry point for illegal migration in the European Union with most arrivals occurring on eastern Greek islands from the nearby Turkish coast. Under a 2016 agreement backed and funded by the EU, the movement of migrants is restricted to those islands until their asylum claims are processed.