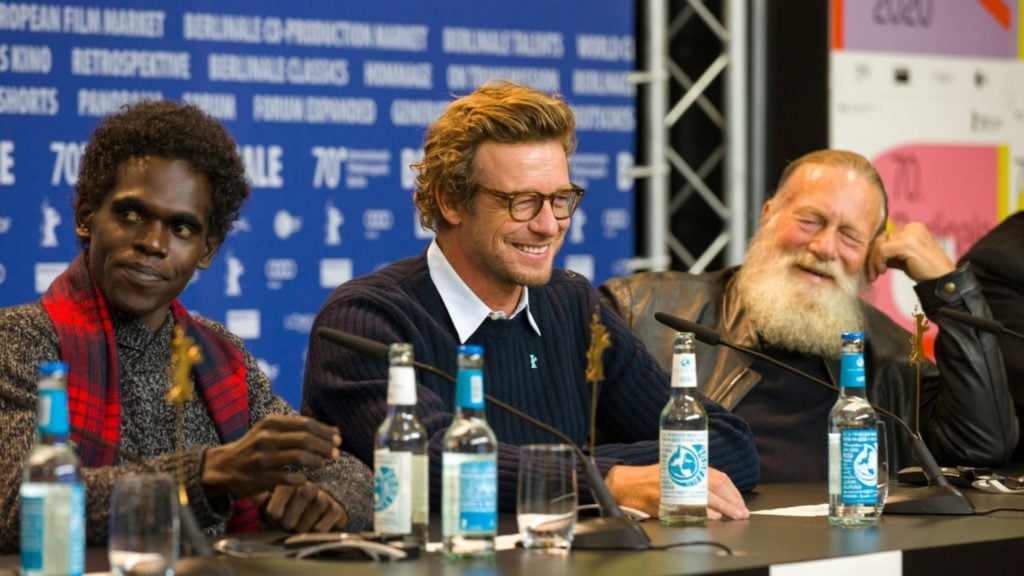 Jacob Junior Nayinguul, Simon Baker and Jack Thompson who star in 'High Ground' at the Berlinale Special on 23 February. Directed by Stephen Maxwell Johnson with screenplay by Chris Anastassiades and cinematography by Andreas Commis.

For screenwriter Chris Anastassiades his latest film High Ground is a long way from the Wog Boy franchise delving as it does into the dark aspects of Australia’s history and is an approach that has won international recognition.

High Ground which premiered at the recent Berlin Festival was honoured with a special gala screening at the Berinale, the Berlin Film Festival, last month and was one of eight Australian films that were selected for the Berlin festival.

Mr Anastassiades has worked in film and television for more than 30 years as a writer and story editor. Among his credits are the two Wog Boy films of 2010 and 2011. He also wrote the script for Yolungu Boy, the 2001 film that was directed by Stephen Maxwell Johnson who also directed High Ground. Mr Anastassiades received an Australian Film Institute nomination for Best Original Screenplay for Yolungu Boy.

The latest film stars Simon Baker who has many films to his name including the popular TV show The Mentalist. Veteran actor Jack Thompson, who appeared in Yolungu Boy, has a role along first-time actors from Arnhem Land in the Northern Territory, Witiyana Marika and Jacob Junior Nayinguul.

High Ground has been 20 years in the making and centres on the story of a former sniper, Travis (Simon Baker),who returns home after serving in World War One. He becomes a patrol officer in Arnhem land and things go badly when the attempt to arrest an Indigenous man gets out of hand and the men, women and children of the tribe are massacred.

Years later, in 1936, Travis is in pursuit of Gudjuk (Nayinguul), who was the only person that Travis was able to save from the massacre.

The film’s success in Berlin has given it an international attention and Variety reports that Samuel Goldwyn Films has picked up the United States distribution rights.

The magazine draws special attention to Mr Anastassiades’ contribution: “Chris Anastassiades’ script is evidently at pains to give its Aboriginal characters a greater share of its perspective than in certain past portrayals of this historical era.”

It also draws attention to the cinematography of Andreas Commis in which the grandeur of Kakadu National Park forms an impressive backdrop.

♦ High Ground is set for release in Australia in July.