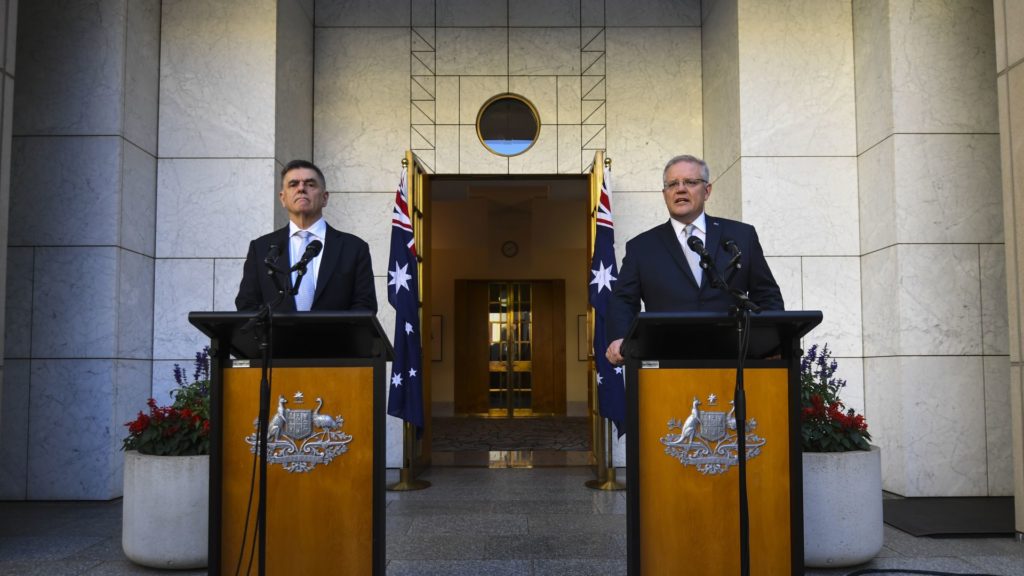 Australian Prime Minister Scott Morrison said the government is expecting the coronavirus will last for at least six months. “We are going to keep Australia running … it won’t look like it normally does but it is very important we put in place measures that are scalable and sustainable,” he said. “What we are doing, you’ve got to be able to keep doing.”

“We are looking at a situation of at least six months for how we deal with this,” he said, prior to the national cabinet meeting.

“There is no two-week answer to what we’re confronting. There is no short-term, quick fix to how this is dealt with in Australia.”

Chief Medical Officer Brendan Murphy reaffirmed this, adding that a 2- to 4-week lockdown would not be beneficial as “the virus will just flare up again without any real long-term benefit”.

“To be clear – a short-term 2 to 4 week shutdown of society is not recommended by any of our experts,” he says. “It does not achieve anything. We have to be in this for the long haul. As the prime minister said, it could be six months or more that we have to practice these new ways of interacting.“There is no way that we can lockdown society and make everyone stay home and then in a month’s time, undo that, because the virus will just flare up again without any real long-term benefit.”

Pubs, cinemas and big restaurants are being hit by unprecedented restrictions as the nation’s leaders ramp up efforts to restrict the spread of coronavirus.

The government has banned non-essential indoor gatherings of more than 100 people from gathering inside following the imposition of an outdoor ban of 500 people on Friday. “Outdoor areas it is 500 and indoor areas it is 100,” he said. “That is effective now, as of today.”

He says that essential gatherings which will not be affected include: airports, public transport, hotels, prisons, courts, shopping centres, offices and factories, construction sites.

“If you’re already overseas and wish to return to Australia, we recommend you do so as soon as possible by commercial means,” a notice on the government’s Smart Traveller revealed on Tuesday night.

Speaking from Parliament in Canberra today, Mr Scott Morrison reinforced this message with the Federal Government upgrading its travel advice to a ‘level 4’ for the entire globe for the first time in Australia’s history.

“The travel advice to every Australian is ‘do not travel abroad’. Do not go overseas. That is very clear that instruction,” he said, adding that strict border control procedures will remain in place with travellers required to self-isolate for two weeks after their arrival.

Mr Morrison said that domestic air travel is “low risk” based on advice from the chief medical officer, Mr Murphy.

“We have not seen a lot of evidence of people contracting this virus on aircraft. It is when they have arrived. The issue is not people necessarily being on planes, the issue is people moving around the country.”

He spoke of isolating areas around the country, such as indigenous community.

Ordinary travel: Mr Morrison stressed the importance of ‘social distancing’, adding that if you are “in a cab or an Uber, sit in the back seat, not the front seat”.

“Dr Murphy and I are practising social distancing right now. I would suggest the rest of you might want to think about that as well,” he said, while adding that public transport is essential.

You will only be tested for #COVID19 if you develop a respiratory illness and:
– returned from overseas, or have been in close contact with a confirmed case, in the past 14 days
– are a healthcare worker, with a fever, who works directly with patients.https://t.co/JD5gXxL1X5 pic.twitter.com/GW5nin9nzE

“Whatever we do we have to do for at least six months,” he says.

“That means the disruption that would occur from the closure of schools around this country, make no mistake, would be severe. What do I mean by severe? Tens of thousands of jobs could be lost, if not more.”

He said that the wide-scale closure of schools “might be anti-intuitive”.

“That happens for two reasons. When you take children out of schools and put them back in the broader community, the ability for them to potentially engage with others increases that risk. And that’s the understanding we have,” he said. “The other issue is the disruption impact that can have and put at great risk the availability of critical workers such as nurses and doctors and others who are essential in the community because they would have to remain home and look after their children.”

He pointed to the huge success of Singapore in combatting the virus while keeping schools open.

“Right now, schools should remain open. That is the clear and crystal health advice from the AHPPC, and that is the clear and unified position of all the states and territories,” he said, adding that he would continue to send his own children to school.

It is important that our aged population get plenty of support during this time. New measures are in place. This will be done on a facility-to-facility basis,  that will still accommodate social distancing.
– Only two people are to visit at any given time per day.
– Keep visits short
– Visits should be conducted in resident’s rooms rather than communal areas
– No large group or school visits (including social gathering or entertainment)

Morrison says all Anzac Day services should be cancelled as it poses a high risk to the older generation that frequent these kinds of events.
An Anzac Day ceremony will be televised from Canberra.

There are many posts and comments going around on social media, via text and phone calls about corona virus and lockdowns. Some people are even using this time to enact willful fraud.  Morrison urges the public to “avoid nonsense on social media” and “don’t believe it, it’s rubbish.”  Only refer to health.gov.au and relevant state websites for information.

Scott Morrison on hoarding: “Stop doing it. It’s ridiculous! It’s un-Australian, and it must stop.”