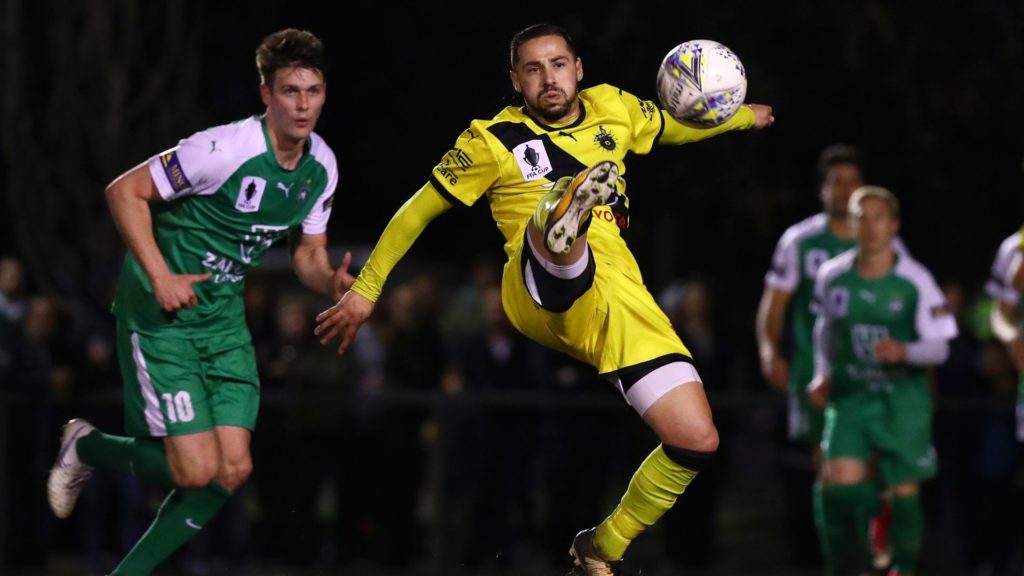 Many important football clubs are currently struggling to survive as a result of the coronavirus measures. Photo: AAP/George Salpigtidis

Coronavirus restrictions have caused a number of ‘secondary’ things within society, such as the entertainment industry, to take a backseat in an attempt to control the spread of COVID-19.

Yet that doesn’t take away the fact that many people depend on these industries to make a living for themselves and support their families. A good example of this is state football, a source of employment for many people.

The total ban of football games by the Football Federation of Australia (FFA) and Football Victoria (FV) have resulted in the clubs falling into a state of hibernation without knowing when – or even if – they will be able to resume their season, or how the landscape will be if that eventually comes to pass.

Neos Kosmos reached out to the owners of two of the most prestigious and well-known Greek clubs, Heidelberg United Alexandros and South Melbourne Hellas, in order to find out just how things really are for them during this period of extended isolation.

“What we’re living is surreal. We’ve never seen anything like it,” Heidelberg chairperson Steve Tsalikidis said.

He added that footballers are trying to “remain positive, keeping in mind that they may be called to resume the season at some point in the future, but they’ve also got their own issues to deal with.” Both club owners expressed serious doubt in regards to whether the season will be completed or not.

“Whichever way we look at it, this year will be compromised,” South Melbourne chairperson Mr Maikousis said.

“But the important thing is to complete it so we can start off from a clean slate next year.”

Mr Tsalikidis feels the same. “I honestly can’t see how the season will be viable as the financial impact (of the measures) will be massive. It’s an issue that we will all need to work together to get over it.”

But what are these problems that the state football clubs are currently facing and could leave their future in doubt, even if the measures were to be withdrawn tomorrow?

“Initially you have the sponsors, from which we depend on financially. These people have their own businesses, they’re going through their own issues trying to hold on to their staff. How do we, as clubs, approach them and ask them for money?” Mr Tsalikidis asked.

“Then there’s the fan issue. We might need to play our games under lockdown or with a very limited number of fans. And even if there’s no limitation, there’s still the fear out there, people might be too scared to come to the games”.

On the other end, Mr Maikousis explains that things are a little bit better for South Melbourne, yet he comprehends the difficult position that most other clubs are currently placed in.

“As you may know, South depends greatly on our sponsors, which is why we’ve done some financial programming depending on if we have a regular season, a half season or even no season,” he said.

“And we always make sure to keep them up to date. Of course there are still several agreements that need to be concluded by the end of this season, which is why we would prefer for the schedule to be completed regularly. But we’re in a position where we can be flexible around that. We don’t really depend on our gates, but we understand that other clubs do depend on their gates and they depend on the presence of the South fans at their grounds as well.”In closing, the two chair people share their opinion regarding the current situation and whether it will jeopardise the future of the entire sport.

“It doesn’t help us that there’s no clarity at the moment,” Mr Maikousis said.

“I do think that community and grassroots will be alright and they’ll always be alright, but we can’t miss the season, these kids need to play. There are so many issues that need to be solved right now, yet through these issues we could be presented with opportunities to reform football, which is something that we’ve been expecting to happen for so long.”

Mr Tsalikidis shares the same concerns. “I don’t think the sport itself is in jeopardy,” he said. “I just think the clubs are in danger. And how could they not be when the AFL itself, which is worth billions, is up against it? Of course, this could serve as a chance to review football but that’s something that we’ve been hearing for ages. Let’s hope they can get it right this time.”