Xu Zhen: Eternity vs Evolution from the National Gallery of Australia to the world “Even today, many people still have the idea that valuable or desirable things only come from overseas.” Xu Zhen

A toppled Corinthian column, just like those of the temple of the Olympian Zeus in Athens, is sprawled on the ground. It is not broken into its constituent drums. Instead, it loops and coils round itself like a pert temple snake, part obduracy, part infantile cunning. Suddenly its capital rises to reveal a yawning void of a mouth. It regards the viewer and then coyly follows their startled movements, in nuce, a python on the way to becoming a Pythia.

For the western viewer, ensconced within a classical discourse whose understanding of Ancient Greek culture is often monolithic, angular and linear, the fluidity of Chinese sculptor Xu Zhen’s Corinthian snake, entitled “Hello,” which forms part of an exhibition currently at the National Gallery of Australia: XU ZHEN ®: ETERNITY V EVOLUTION, is confronting and subversive. It challenges stereotypes and confounds pre-conceptions of the manner in which culture is appropriated, so as to reinforce a particular articulation of civilisation.

For a Greek, cognisant of the central place of snakes within ancient Greek worship, they being symbolic of healing, knowledge, autochthonous power and the transition between the upper and lower worlds, the Corinthian snake provides an even greater conundrum. In vivifying a primordial archetype, does the snake, in Xu Zhen’s graven vocabulary, signify an evolution of understanding of the ancient Greek cultural heritage isolated from western power narratives, or is it emphasising the enduring and eternal qualities of the irrational basis of the human subconscious, subverted first by the Olympians, as Apollo vanquished and assumed sovereignty over Pytho and then by the Western world at large? And how does the dichotomous but also synergistic dialectic between eternity and evolution impact upon our conception of our hybrid culture given that it is also based upon a biblical understanding of the snake as a symbol of perennial evil, and, in part upon an iconoclastic attitude to ancient art, prior to its re-appropriation? Furthermore, if Xu Zhen’s ambiguous Corinthian snake is both eternal and evolved, can it shed its marble skin and if it does so, what will ensue?

In an interview with Peter Johnson, National Gallery Curatorial and Programs Coordinator, available on the National Gallery of Australia’s website, Xu Zhen invites us to understand the connotations of ‘Western’ culture from a modern Chinese perspective: “Here, I’ve used a traditional thing and renewed it in some way. It also has a threatening aspect, like the imperial civilisations in the Greek tradition, of a power system over you, a bit like a shadow. It’s interesting because, in the West, such columns would be used in official buildings such as courthouses and banks, whereas they most often appear in front of public baths in China, or places where you can sing karaoke.”

The accuracy of Xu Zhen’s historical interpretation is not so significant here as his negotiation and inversion of stereotype and metaphor. His ‘Looking-Glass’ approach to the corpus of ancient Greek art and all it signifies is playful, irreverent and profoundly moving. Take for example his extraordinary “European Thousand-Armed Classical Sculpture,” a procession of a pantheon of deities, removed from their pedestals and positioned on our level. The litany is headed by the goddess Athena in full regalia, an aggressive snake, rigid, with head raised, ready to strike, at her side, providing an interesting dialogue with its gigantic, benign and fluxional Corinthian counterpart. The outstretched arms of the sculptures behind the daughter of Metis, remind the viewer of the many armed statues of the Indian gods and in particular that of Kali, each of whose ten hands traditionally holds a weapon or ritual item representing the power of one of the Devas. Here, the Devas constituting the goddess are not merely implied by symbols, they are portrayed, lineally. If anything, this is a goddess with depth and facets, and she gazes at us blankly, her arm and palm outstretched. Is that gesture to be interpreted as one of benediction, of supplication or of complete indifference?

The sculptures of the gods behind her, an array of Apollos, Zeuses, Poseidons and Heracles appear as if they are teetering and their arms are outstretched in various poses, as if frantically striving to restore their balance and stop themselves from falling. Towards the back of the procession, there are two version of a Christ-like figure, in the first, his arms and feet positioned in the usual manner when depicting the Crucifixion, in the second, as if in Deposition. Here though, there is no cross. The very conceptual framework that gives the usual meaning to this image has been taken away. This figure is but one of many that constitute the dimensions of Xu Zhen’s Athena. Behind that figure, significantly, are two portrayals of a secular goddess of the modern era, the Statue of Liberty. One of them appears to be trying to clutch at something. What are we to make of Xu Zhen’s agglomeration of the Old Gods and the New? Have our gods, or at least, our understanding and worship of them evolved over time, or have they in fact remained eternally the same in all of their manifold incarnations? Is Xu Zhen’s a conscious subversion of western sacred cows and what does that signify for a modern China articulating its own identity while engaging with the occident? Are we in fact being gently toyed with, as we were with the serpent previously?

To Peter Johnson, Xu Zhen confides: “When I play with cultural elements, they don’t carry the same weight as they do for others. It’s not a lack of respect but I feel I can be audacious with such forms because I have a greater distance from them.”

Sometimes distances are bridged in the most surprising of ways.

The base of the sculpture “Eternity” is eerily familiar. It is in fact, a replica of the friezes of the East Pediment of the Parthenon, a symbol of western cultural appropriation if there ever was one, given that the British broke them off the Parthenon, stripped them of their painted decoration, and suitably enwhitened, refuse to give them back. To this lofty foundation, Xu Zhen does something truly breathtaking: he removes the heads of the Greek figures and upon their necks, attaches inverted headless statues of the Longxin Buddha, the Cosmic Buddha, the Amitabha and the Vairochana. An entire fundament of Chinese culture is turned on its head and compelled to union with the archetypal symbol of the West. We can tell where one ends and the other begins, but the ensuing synthesis has a harmony all of its very own. Again, is this because certain truths, certain depictions in and of themselves are so authentic as to be eternal, or rather, are we witnessing the evolution of two societies in dialogue with one another into an altogether novel conglomerate, as by attrition, they come to resemble each other and reconcile with one and other, more and more? Or is on the other hand Xu Zhen suggesting to us that we are in fact, the mirror image of one another and that the hallowed symbols of our culture deserve to be interrogated, mocked and deconstructed once in a while, a point pertinent, give the latest bout of iconoclasm experienced by the western discourse, and China’s own legacy with a similar process, during Mao’s “Four Olds” Campaign?

On this process of reconciliation, the artist reveals in his interview with Peter Johnson: “When I create a work, I’m always trying to find some kind of contradiction. I don’t like it to be completely white or black. When people look at my works, they sometimes try to find the black part or the white part. Through that, there’s a kind of democratic aspect, a kind of balance you can find in it. After creating work for twenty years, I wonder if it might also be related to the Chinese tradition of the yin and yang. While my work might appear direct, when you really try to understand it, I hope the meaning becomes a bit more blurry in the end.” 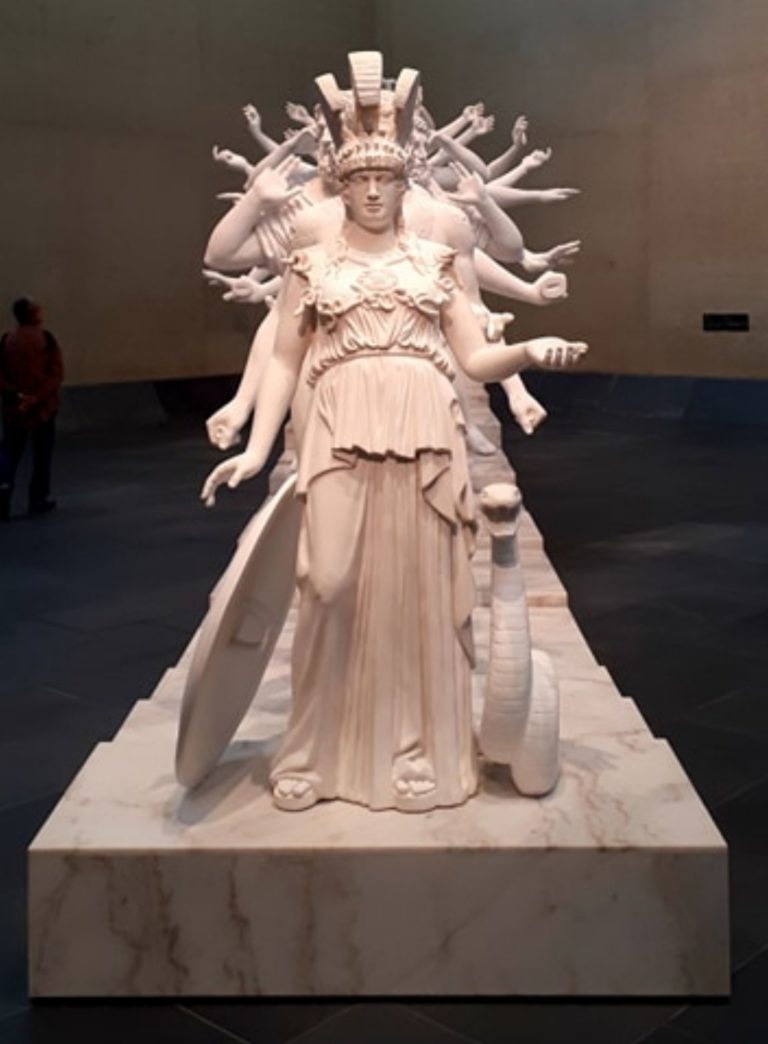 As a refreshingly anachronistic and subtle means of assessing and subverting our own accumulated cultural baggage, the assumptions it entails and the emotions it evokes, Xu Zhen’s sculptures are masterpieces of psychology, their refined, impassive features adding ever so artfully to the increasing disquietude of the viewer.

XU ZHEN®: ETERNITY v EVOLUTION will be displayed at the National Gallery of Australia, Canberra, until 13 September 2020, and can also be found online, at the NGA’s website.