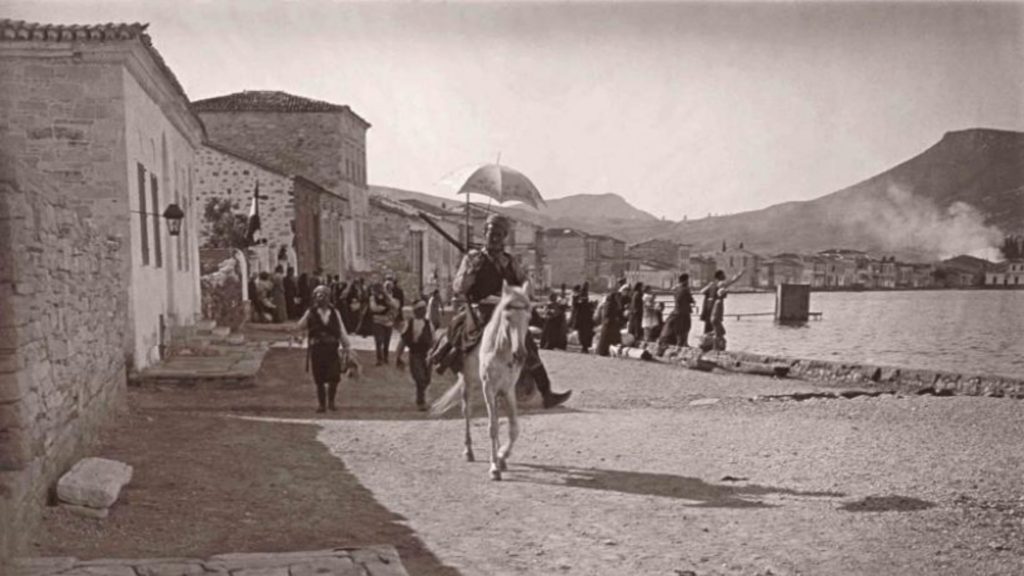 Turkish irregulars showing off their booty after the pillage of Phocaea. At the head, a Turkish bandit shows off an umbrella, while in the background the French flag flies on top of a house as Greeks gather along the quay seeking passage out of the town. Photo: Félix Sartiaux

Research conducted by Greek Genocide Resource Center, an independent  online resource site, has yielded a further 34 sites where the massacres of Greeks took place in Asia Minor in between 1914 and 1923.

Aris Tsilfidis who works on the website said that work in documenting the massacres had begun two years ago.

“We recently found a further 34 massacres (during the Greek Genocide) and incorporated them into our interactive Google map. This takes our total number of documented massacres to 166,” he said.

He told Neos Kosmos that the centre would soon be updating the map of deportations that took place over the period to include another 50 deportation sites.

For the past 10 years the online centre has been documenting massacres, forced deportations, death marches and other events that impacted on the Greek.

“It is important to note that the genocides did not just affected Pontian Greeks but the Greek populations in other centres in Turkey and the Ottoman empire including in Syria, Lebanon and Jerusalem.”

He said that many Greeks did not understand the full extent of the Greek Genocide and the full effect of the population exchange that subsequently took place between Greeks and Turks.

At the time, Greece had a population of four million people at the time and 800,000 refugees flooded into the country, a 20 percent increase in the population.

Mr Tsilfidis said between 750,000 and 1 million Greeks were massacred in the years during and after the First World War.

A pharmacist by day, Mr Tsilfidis who is of Pontian descent has made it his mission to ensure that the events of the early 20th Century are not forgotten.

Remembrance of those events is one of the reasons why Greeks, Armenians and Assyrians have sought recognition for the genocides that took place. Mr Tsilfidis said that in this regard the Armenian community had far outstripped the Greeks in this effort with many books published on the terrible events of those times.

Mr Tsilifidis has co-translated and edited The Genocide of the Greeks in Turkey. Survivor testimonies from the Nicomedia (Izmit) Massacres of 1920-21 by Kostas Faltaits and is translating and editing a second book, His researches, he does not consider himself to be a historian but an independent researcher, includes information gathered from the Patriarchate’s Black Book and the testimonies of over 1000 eye witnesses.

“People need to know what happened. People are defined by the way they remember their dead,” said Mr Tsilfidis.

♦ For more information visit The Greek Genocide Resource Center link or to view maps of the massacre sites.