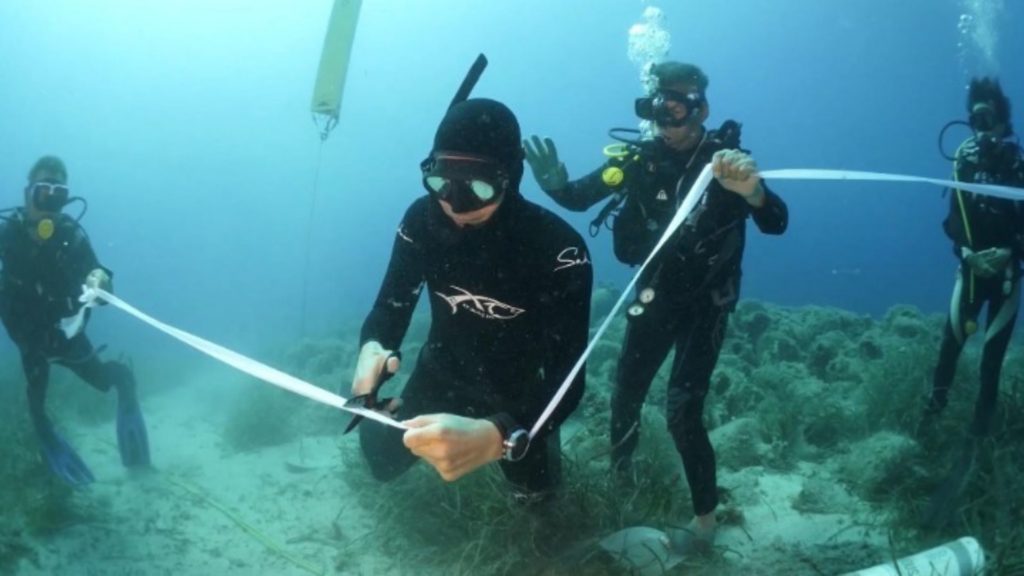 utting of the ribbon ceremony at the Peristera underwater museum, 1/8/2020. Photo: AMNA-MPA

The first underwater museum in Greece, accessible to divers, was inaugurated on Saturday 1 August 2020, at the site of an ancient shipwreck off the islet of Peristera, in the centre of the Aegean. The ribbon was cut at a depth of 25 metres by Regional Governor of Thessaly Kostas Agorastos and Greek pop star Sakis Rouvas, at an official opening ceremony in the presence of Minister of Culture and Sports, Lina Mendoni.

Peristera is an uninhabited islet near the island of Alonissos in the North Sporades archipelago. The shipwreck lies at a depth of21-28 metres at the north of Kokkalia bay near the islet’s west rocky coast. It was discovered by the local fisherman Dimitris Maurikis, and brought to the attention of the Ephorate of Underwater Antiquities in 1985. The shipwreck was excavated by Dr Elpida Hadjidaki, archaeologist and Head of the Ephorate, on 1992-1993, 1999 and 2000-2001, revealing a cultural treasure of great significance.

These are the remains of a large wooden merchant ship, probably an Athenian vessel, dating to the last quarter of the 5th century BC, based on the artefacts and amphorae recovered from it. It is considered to be one of the largest of that era, able to carry three to four thousand amphorae. According to the Ephorate of Underwater Antiquities, the vessel is believed to have sunk around 425 B.C. due to bad weather conditions.

READ MORE: The Importance of WWII Shipwrecks in Greece

Its cargo was composed of transport amphorae (ceramic vessels used for the transport andstorage of various goods), mainly wine amphorae from Peparithos (modern-day Skopelos, also in the Sporades), Ikos (modern-day Alonissos) and Mendi (an ancient city of Chalkidiki, northern Greece), regions well known in antiquity for their wine. A great number of the amphorae are preserved at the site, many of them almost untouched by time.

The underwater museum will initially be operating for a pilot period, from 3 August to 2 October, and will be open to certified scuba divers. Five underwater cameras have also been installed at the site, livestreaming views from the wreck on a 24-hour basis on the website nous.com.gr. Visitors who do not wish to dive can instead take a virtual reality tour of the ancient shipwreck at Alonissos’ information centre. The area still remains unaffected by mass tourism, making it ideal for alternative tourism projects, which can add to its “blue growth” and sustainable development without endangering the natural site’s biodiversity and natural balance.

It must be noted that the site of the shipwreck forms part of the National Marine Park of Alonissos, the first marine park established in Greece, and one of the largest marine protected areas (MPAs) in Europe; the park is rich in flora and fauna, and is especially famous as one of the most important shelters for the monk seal population (Monachus Monachus) in the Mediterranean.

Three more shipwrecks in the Pagasetic gulf which date back to Classical and Byzantine times are set to become underwater museums: the Byzantine wreck on the islet of Kikinthos, off the coast of Amaliapoli in Magnesia (dating to the 9th – 13th century); the Byzantine shipwreck off Akra Glaros point on Donousa island in the Cyclades; and the wreck off Cape Telegrafos in Magnesia (4th century AD). The project of the underwater museums was set up as part BlueMed, a research and innovation Initiative for promoting the blue economy in the Mediterranean Basin through cooperation. It is the strategy of reference, funded by the European Commission for the countries of the area to work together for a healthy, safe and productive Mediterranean Sea.