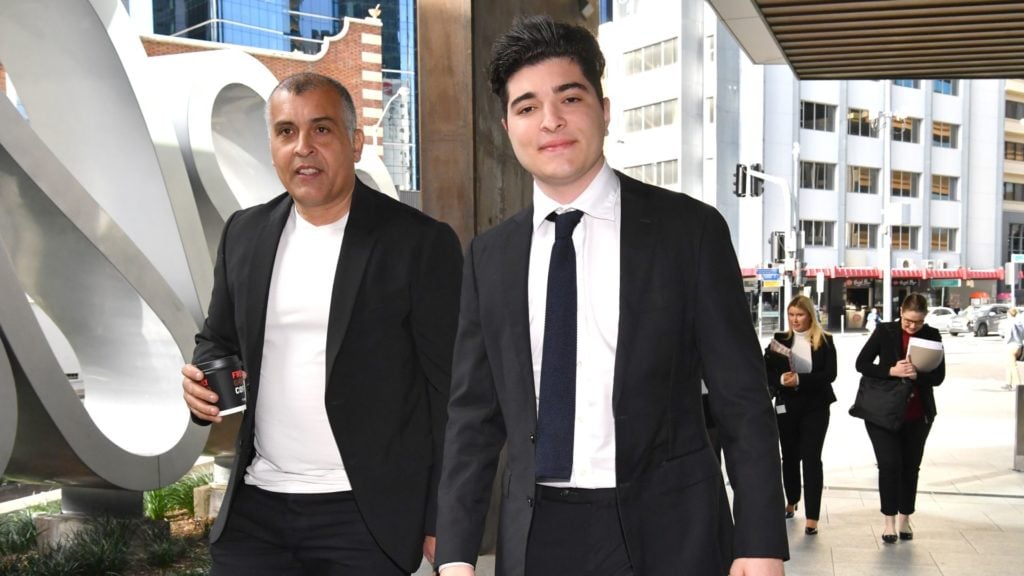 Nick Pavlou, left, with his son, Drew, on their way to the Brisbane Magistrate’s Court. The court has dismissed a public order complaint by suspended University of Queensland student Drew Pavlou against the Chinese consul-general in Brisbane Xu Jie. Photo: AAP

One newspaper headline described Drew Pavlou as “the boy who kicked the hornets’ nest” and it is pretty good description of the year the student has had since 24 July, 2019 when he, along with other University of Queensland students organised a protest in support of pro-democracy students in Hong Kong.

Since then Drew has been at odds with his university and with the People’s Republic of China. And that is putting it mildly. Earlier this month the new UQ vice chancellor Professor Deborah Terry AO banned Mr Pavlou from UQ campuses for a semester and, as a result, stripped him off his elected position on the university senate. This was to have been his final year of studies.

On Monday his case against the PRC Consul General in Brisbane, Dr Xu Jie, was thrown out by a magistrate’s court on the basis that Dr Jie as a consular officer had diplomatic immunity. Drew accused Dr Jie of using the consular website to praise pro-PRC supporters who had violently disrupted the protest last year and claiming that Drew Pavlou was behind it.

Over the past year the protest events and UQs dealings with Drew have received national and international attention from the media and democracy advocates.

Over the past year Pavlou became the target of online threats against himself and his family. The last threat was made a month ago.

“It was one of the scariest ones. It said: ‘If we see you in Brisbane, we’ll kill you’. The police think that the message came from somewhere in Brisbane,” Mr Pavlou told Neos Kosmos.

“The protest on 24 July, 2019, was the first-ever protest that I had been in. It is strange how quickly life changes. I was normal kid last year, now I am an activist for human rights against a major government.”

It is a transition that has been hard on his family. Nick Pavlou, his father, who runs  a greengrocer shop and has been working in the business since he was 16 yeas old, said that initially he had not been very supportive as he feared for Drew’s younger brother and sister.

“There was a lot of pressure and we were not very supportive for the first two or thee months. At first I hoped it would all go away but I realised it was not going to go away.

He said Drew had always worked hard at university and was a top student who won academic awards.

“He did work at the shop during his school holidays but he is more cerebral and loves books. He did tutoring where he earned more money than what I could pay him,” said Mr Pavlou.

Drew said at the height of his activism he would be working up to 12 hours a day: working with his lawyers, answering media queries, responding to social media and also working at his studies.

“Dad always preached about putting your head down and getting things done. He Is my role model. Ever since I can remember he would be getting up at 4am to go to the shop and he did this just for us.

“What rubbed off from my father was the capacity for hard work and the discipline. It is from him that I get my energy.”

Drew remembers spending summer holidays working at the shop and realising he was not suited to the work.

“I was always a dreamer and not practically minded. I was distracted and I am more suited to the things I am doing now – fighting for change.

“Sometimes Dad works too hard. It is incredible what he had done working hard all these years. He is my inspiration,” said Drew.

“I could see he needed the family’s support and that the pressure was heavy on him, I thought he was going to burst.

“I realised that I had to accept what he is doing and support him. I realised that he needed someone to talk to about the things he was going through.

“He is a good boy at heart and very kind. He just wants the best for people,” said Mr Pavlou. “He loves the rough and tumble of politics. He wants to help people and some say he is too young. We will see what will happen. I am sure he will find his path.”

Mr Pavlou said Drew had from an early age shown concern for the rights of others.

“He was about 13 when he read about how no one intervened in the Rwanda genocide. He has worried about humanity and human dignity all his life,” he said. “He has given his last money to friends who have needed help in an emergency.”

For Drew the family’s support was the key that helped him through the difficult times of the past year.

“For Greek people, family is everything. My parents’ support has made this a lot easier. I am very lucky,” said Drew.

“My mum (Vanessa) is softer, very kind with a great sense of humour. Dad is the stoic warrior.”

In the turmoil of the past year, Drew has realised that his role in life lies in activism, to promote democratic values and human rights.

“I feel I can change the world. I have the energy and ability to spend time fighting for these things. I am still spending many hours on this but it does not feel like a chore,” he said.

After the setbacks at UQ and in court, Drew is still on the go. He is busy setting up the not-for profit organisation Defend Democracy Alliance to fight human rights abuses around the world.

Over the next few weeks he is waiting to hear the Supreme Court date for his case against UQ. And he is also trying to keep up with his studies, reading the books for the course that he hopes he will be able to resume.

As well the concerns he voices for the treatment of democrats and minorities in China, he has also spoken out against the Turkish invasion of Cyprus.

“I’m only Australian because my Greek grandparents were never able to return following Turkish ethnic cleansing” he said in a post commemorating the 46th anniversary of the Cyprus invasion.”