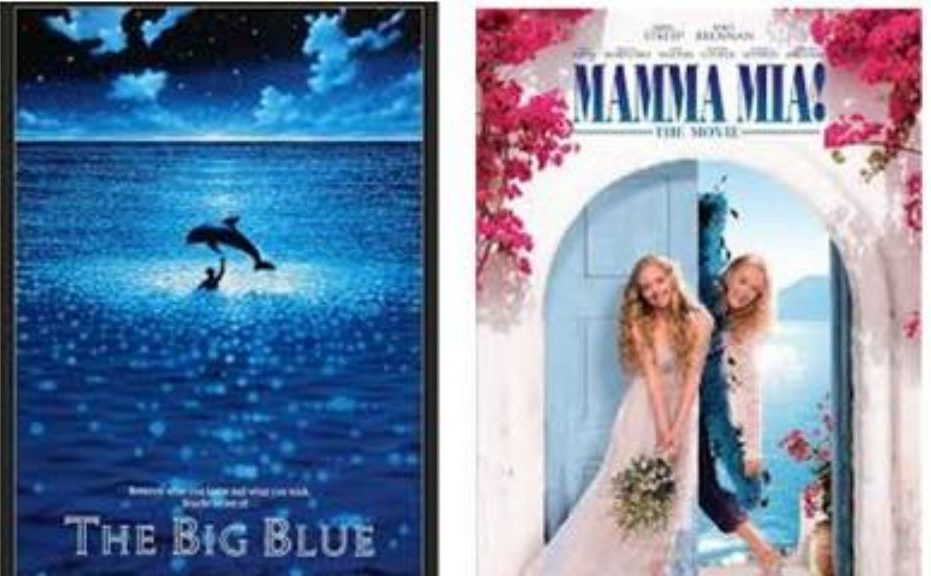 The Big Blue and Mamma Mia were both filmed in Greece. Photo: Movie posters

Recognising the significant contribution of the audiovisual sector to a country’s economy Greece introduced in the recent years an investment mechanism in order to support audiovisual and film productions. Through a “cash rebate” system providing investment incentives for audiovisual productions (film/TV/documentary/animation/digital games) for expenses incurred in Greece, the aim is to attract foreign filmmakers and audiovisual producers supporting also domestic production companies.

Greece has attracted many foreign film productions throughout the years. From Zorba the Greek that was filmed in Crete in the 1060’s to Captain Corelli’s Mandolin that was shot in Kefalonia or Lara Croft in Santorini and Mamma Mia in Skopelos in later years, without neglecting high-end TV productions like The Durrells filmed in Corfu in 2017, Greece has been the natural stage set for many foreign movies due to its unique locations. It is said that Greece is a natural studio with a film-friendly light in its DNA providing at the same time a vast range of breathtaking landscapes from picturesque traditional villages to unique islands, forests and volcanos along with a versatile architecture comprising ancient Greek, Roman, Medieval, Byzantine and modern elements. Through the “cash rebate” system Greece aims to attract more foreign productions to the country.

Recently, a number of amendments were decided in order to improve the existing support scheme and make Greece more competitive within the international audiovisual market along with other measures such as tax returns, reducing red tape etc. According to these amendments, the amount of cash rebate increased from 35 per cent to 40 per cent of eligible costs incurred in Greece in conjunction with a drop in specific minimum spending, adapted to the different audiovisual products. For example, minimum eligible costs were diminished to 60,000 euros, when it comes to film / TV documentaries or animation (from a general threshold of 100,000 euros), while eligible costs for digital games were reduced to 30,000 euros (instead of 60,000 euros). This adaptation to the needs of different production categories was necessary in order to widen the scope of support to lower budget productions.

At the same time, “Above The Line” eligible costs – meaning the part of the budget that goes to the payments of the starring actors, the scriptwriter, the director and the producer- have been risen as percentage (to 35 per cent from 25 per cent) to allow the rebate to cover a larger part of the expenditure, which is usually very high in big productions. A 30 per cent tax return for those that invest in productions in Greece is also foreseen, acting in combination with the cashback incentive. Regarding application process, the new amendments significantly reduce necessary paperwork and documentation simplifying submission and payment procedures, shortening also application deadline to just ten days, instead of two months, before the start of the filming in Greece.

This reinforced investment scheme aims to position Greece among the most competitive countries regarding film making incentives along with Malta that offers 40 per centcash rebate, Belgium and Romania with a 45 per cent and Singapore that offers 50 per cent cash rebate to foreign film makers who choose these countries for the production or post-production stage of their audiovisual products. In addition, the recent legal provisions extent the scope of the support scheme to the Greek Public Broadcaster ERT with a view to enhancing the creation of an audiovisual production ecosystem at the example of the Danish public service broadcaster DR that has become a player in the international market for television content.

According to a study by the Greek Foundation for Economic & Industrial Research (IOBE) concerning the impact of the film industry in the Greek economy, it is estimated that a big foreign production with €25 million expenditure in Greece could increase GDP by €39 million while in terms of employment, a single big foreign production could sustain more than 755 jobs during the shooting, of which 223 positions would be in sectors directly involved in the film production. Foreign film productions also contribute to the strengthening of the domestic film industry through the employment of technical and artistic resources, knowledge transfer or the development of technological infrastructure.

Last but not least, attracting foreign movies can be an alternative marketing and promotional tool as the promotion of a region through a film is usually more effective than advertising. According to the IOBE study, it has been shown that a significant number of people visit a region or a city, attracted by the beauty of the landscapes and cultures captured in a film. It has also been pointed that the domestic film industry experienced a boom in areas where foreign productions were made.

According to the National Center of Audiovisual Media and Communication (EKOME) which is responsible for the “cash rebate” scheme, from April 2018, when the scheme launched, until July 2020, 89 projects have been supported, almost half of which are international projects. The total budget expected to be invested in the Greek audiovisual industry by those projects is estimated at €86 million, with the respective cash rebates reaching €29 million. That translates into 26,500 job openings in more than 100 shooting locations across Greece.

Greece became one of the first European countries to resume filming international projects, after the gradual lifting of lockdown measures in the country due to the COVID-19 pandemic, under new guidelines and safety rules set by the Ministry of Culture. Agreements concerning the setup of a big studio in Thessaloniki, as a branch of Bulgaria’s Nu Boyana Studios announced last year, further promoting Greece as a filming destination, as well as plans concerning the operation of film offices across Greece, charged with facilitating the filming process in any given region, are also expected to resume.