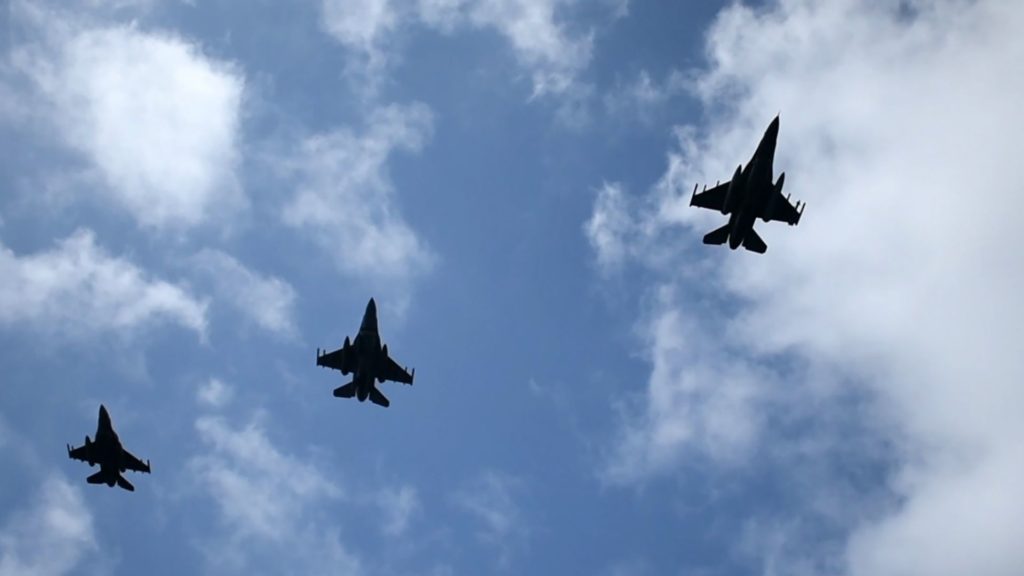 In this photo provided by the Greek Defense Ministry on Friday, 4 Sept, 2020, air force jets participate in a joined training drill with armed forces from Greece and the United Arab Emirates near the Greek island of Crete, southern Greece. Photo: AAP

Bitter regional rivalries between Greece and Turkey are continuing as competition over gas discoveries in the eastern Mediterranean have escalated fears for military confrontation.

Since last month Turkish ships have been navigating in waters which belong to Greece, according to international laws but which Turkey has for decades disputed. Ankara has not signed the UN Convention of the Law of the Sea, and it argues that the Turkish coastline is dotted with islands, and it claims that these should have limited exclusive economic zones (EEZ) as had been ruled in a 1982 dispute between Libya and Tunisia when maritime boundaries had been determined.

The international community has been calling for a diplomatic solution to the crisis. The two neighbouring countries were invited to NATO talks, but Athens refused to participate while Turkey still had ships in its EEZ, and the situation will be further discussed at NATO’s meeting on Wednesday, held at Greece’s request according to Greek government sources. However, Greece has set a provision for talks with Turkey – the withdrawal of the Turkish research vessel Oruc Reis from Greece’s continental shelf.

The European Union has also been heavily involved in negotiating a solution which would prevent a military confrontation between the two countries.

Greek Prime Minister Kyriakos Mitsotakis met with EPP Parliamentary Gropu head Manfred Weber during a video conference. During the meeting, Mr Mitsotakis provided a substantiated presentation of Turkey’s provocative actions in the region. Other participants in the conference were all the Vice Presidents of the EPP Central Committee, who expressed their unanimous support for Greek positions. At the end of the meeting, Mr Weber Tweeted: “The EPP Gropu fully supports the work of the Greek government to protect Europe’s external border and to stand up against Turkish military aggression at sea. We will not be blackmailed.”

On its official Twitter account, the EPP Group wrote: “Our reaction must be given on two levels: EUCO to define the conditions under which we could trigger new economic sanctions. If the provocations continue, Erdogan must be hit where it hurts most – in his wallet. It is time to fundamentally rethink our ties with Turkey. We must end the membership process and rethink a new relationship based on the idea of partnership, in which we are not held hostage,” added the EPP Group, and continued: “It is unacceptable for Europe to give in every time Erdogan threatens to open Turkey’s borders and break our migration agreements. We have to change the game. We will not be blackmailed!”

I presented to the @EPPgroup evidence of the provocative actions of Turkey in the Eastern Mediterranean. Greece is an advocate for dialogue, since we have absolute faith in our positions. However, real dialogue cannot be pursued under threat or violations of our sovereign rights. pic.twitter.com/CpBc4HYJu7

European Commission Foreign Affairs Spokesperson Peter Stano on Tuesday emphasised the importance of EU solidarity with Greece and Cyprus, in response to reporters’ question during the regular press briefing.

Asked about the Turkish foreign minister’s reference to mediation by Switzerland on the matter of the Eastern Mediterranean, Mr Stano said the Commission has noted a number of proposals for mediation “but what is important is for the EU is our unity, our solidarity with Cyprus and Greece, and the need to find a solution.” Also important, he stressed, was that the provocations and unilateral actions must stop.

Russia has also come to the table as far as Turkey’s provocations in the eastern Mediterranean are concerned.

“As far as your relations with Turkey are concerned, we are ready to promote dialogue, pragmatically based on mutual interests and in search of decisions, which will be fair and based on international law,” Mr Lavrov said on Tuesday at a meeting with Cyprus President Nicos Anastasiades in Nicosia.