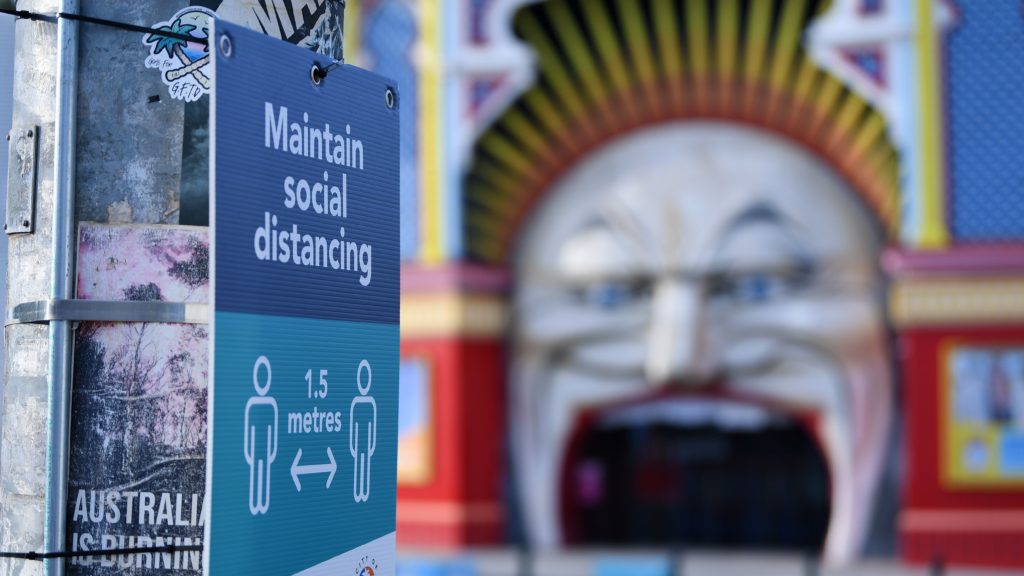 Signage for social distancing is seen outside of Luna Park at St Kilda. Photo: AAP

Victoria’s controversial curfew ended on Monday, and childcare facilities opened their doors, but the streets were as empty as ever in Melbourne despite new COVID-19 cases steadily dropping: 10 on Tuesday, 13 on Wednesday, 15 on Thursday and seven new cases on Friday.

The cost, however, has been high. The Greek-Australian community has suffered especially, accounting for 20  per cent of deaths in Victoria.

Many Greek-Australian businesses, mainly in hospitality, which have languished during lockdown, feel there is still a long way to go as Premier Daniel Andrews’ road map appears to be slow-moving, convoluted and hard to understand, say critics.

Victoria’s Liberal Leader Michael O’Brien told the multicultural media this week that he was “concerned that we seem to be unnecessarily keeping parts of Victoria and parts of Melbourne locked down”.

“We should safely be reopening, with masks and with density limits, retail and hospitality,” he said.

“I’m not saying remove all restrictions, but I’m saying there’s a sensible easing of restrictions that could help get people back to work.”

Under the current road map, indoor dining will only resume after Victoria has recorded 14 days straight of zero new cases, but Mr O’Brien – a former small business owner – sees this as an unnecessary burden being placed on struggling businesses. He is concerned on the impact the continue restrictions will have on people’s finances and mental health.

A survey by Roy Morgan this week revealed that a majority of 56 per cent of Victorians want the city’s restaurants, hotels, clubs and cafes to be allowed to provide table service with proper social distancing – up 19 per cent from three weeks ago.

Some businesses are even questioning the legality of sweeping closures during Stage 4. Jim’s Mowing founder Jen Penman is one of many encouraging businesses forced to shut down during the lockdown to seek financial compensation, especially bearing in mind that the same government-employed professionals were able to continue working during Stage 4.

Landscape gardeners, such as Jim Papadopoulos, were allowed to return to work this week, but Mr Papadopoulos told Neos Kosmos they should never have shut down in the first place.

“For example, in regards to my personal health, I need to avoid the contraction this virus and its paramount for me. I have asthma (respiratory issues I manage) and the impact of the virus could be lethal to me. With the measures already place I felt comfortable and safe to operate. Stage 4 in reality (was) no different to us to be able to work,” he said, concerned of the business needlessly lost during the lockdown.

GP Vicki Kotsirilos told Neos Kosmos that there is room for revision of restrictions. “People living in open spaces and rural areas where there are no people around, also need to wear masks when outside their property yet there may be no people in sight. These are example of situations that the Department of Health should consider and possibly revise guidelines,” she said.

The Liberal leader points to the example of other states.

“It’s terrific that we’ve seen case numbers slow down. But other states have shown that we can safely reopen while the virus is in limited amounts in the community,” Mr O’Brien said. “In NSW in July and August this year they averaged 10 new cases of infections per day every day but NSW stayed open. They stayed open because they had very good contact tracing,” he said.

“That means that when cases are identified they very quickly jump on them. They work out where that person was infected, who they’ve been in contact with, they put out public alerts.”
He said he had made a public appeal to Premier Andrews to increase contract tracing, a move the Liberals would have supported because infections from the hotel quarantine debacle could have been contained, adding that “a mistake became a disaster once it came into the community” due to poor contact tracing. Mr O’Brien states there are parts of the road map which just don’t make sense. “It doesn’t seem to make any sense to me that a Year 11 (student) is safe to go to school but a Year 10 is not, that a Year 7 is safe to go to school and a Year 6 is not,” he said, adding that the Liberals have released their own ‘realistic road map’ stating there are ways to open Victoria ‘sooner and safer’ after speaking with expert modelers, epidemiologists and public health experts. He criticised Premier Andrews’ curfew, imposed without experts’ recommendations, as an unnecessary measure which was lifted just as its legality was due to be challenged in a Supreme Hearing this week.
Citing leading experts, Mr O’Brien questions the benefit of the 5km-restrictions, or the single person bubble.

“My mother lives by herself. If she wanted to nominate me as her bubble, my wife and children would need to leave the house if my mother were to come over,” Mr O’Brien said. “Where is the sense in this?”

Open letters have been plentiful with 13 academics urging Premier Andrews to lift restrictions, followed by another open letter by 10 Melbourne GPs urging the state government to consider the repercussions of the harsh lockdown on young people.

“Seeing children as young as 12 describe their darkest thoughts, some suicidal is very disturbing,” say the GPs.
Dr Stacey Harris, one of the signatories, states that Melbourne could “reopen safely” with social distancing, wearing masks and regular hand washing.

Victoria’s Premier pointed to the Chadstone outbreak this week to make his point as to why the measures and slow easing are necessary.

“Imagine for a moment what a normal Chadstone would have looked like,” he said on Friday, pointing the hundreds of thousands of people that would pass through the area in normal circumstances.

“That case makes two points: One, the response has been excellent, and I thank all of those who have been part of that. Two, it makes the point very clearly, if we were to open up now, just as our modelling tells us, just as our experts confirm for it, one of it or even a handful of these events won’t be a handful of cases,” he said, adding that the numbers aren’t falling by accident.