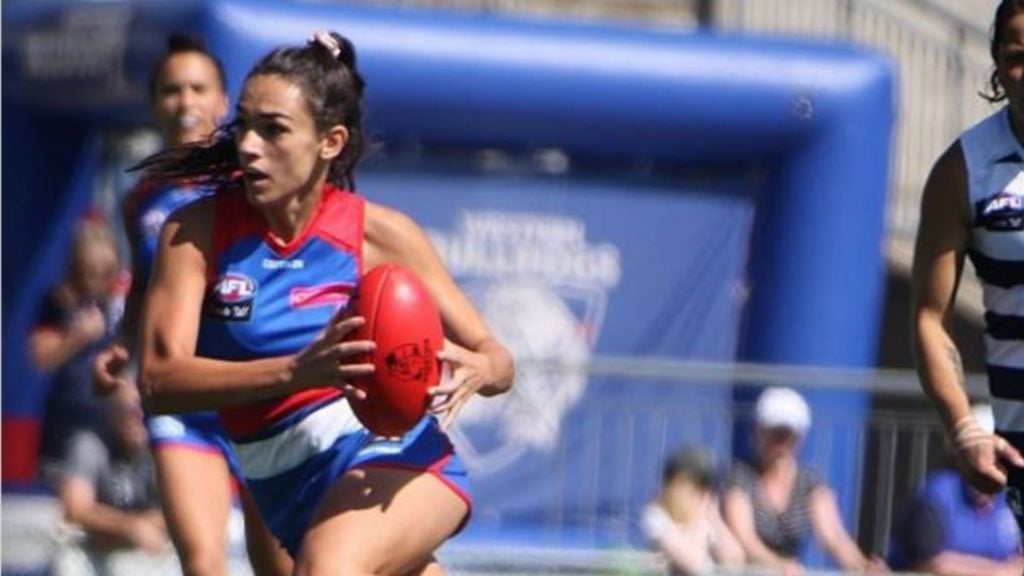 Tonight at 7:00pm many young women across Australia will be nervously waiting to hear their name called out during the AFLW draft.

This year things will play out a little differently due to the COVID-19 pandemic, with the draft picks taking place on Zoom.

Standing by to see who her new teammates will be is Western Bulldogs forward Elisabeth Georgostathis who joined the team last year.

Neos Kosmos chatted with the soon-to-be 19-year-old who had previously captained the Western Jets in the NAB League and won their best and fairest before stepping up into the AFLW.

“What drew me to footy was the team environment and the physical contact involved with the game. I love being a part of a team where we all have similar goals and values.”

“To get pumped before a game I like to listen to music and also just practise a few things such as having shots for goal and making sure I just have a football in my hand.”

“Too many to chose from.”

“I find the strength from the other women the toughest for me as I am pretty small and sometimes can get pushed around easily.”

“My highlight would definitely be playing my first AFLW game. I was so nervous leading up to the game but as soon as I stepped on the field It all went away. It helped that my teammates were so supportive to me and the other newbies and straight away made us feel part of the team. And to top it off we got the win. Overall it was just a moment and a memory that I will never forget.”

“Footy has impacted my life a lot. I never thought I would be playing footy at this level as there was never a competition for women. It has pushed me to run my best and work as hard as I can to get the better results out of myself.”

“Something I have learned about myself whilst playing footy is my willingness not to give up when the footy is near. I always try to push hard to the next contest and help out my teammates when needed.”

“I hope to continue doing well with my uni studies and also keep improving on my footy development to become the best player I can be.”

“That footy is a mans sport and women shouldn’t be playing it because women aren’t as strong or skillful. I can definitely tell you that the women playing in this competition are very strong and skillful, we spend three nights a week in gym to improve our strength throughout our body and many many hours practising and trying to perfect our skills.”

“I love to have a hot shower and just relax for the rest of the night. Whether it’s watching a movie or just sitting down on the couch and getting an early nights sleep.”