Cleopatra’s Golden Rule – or, she who has the gold, makes the rules 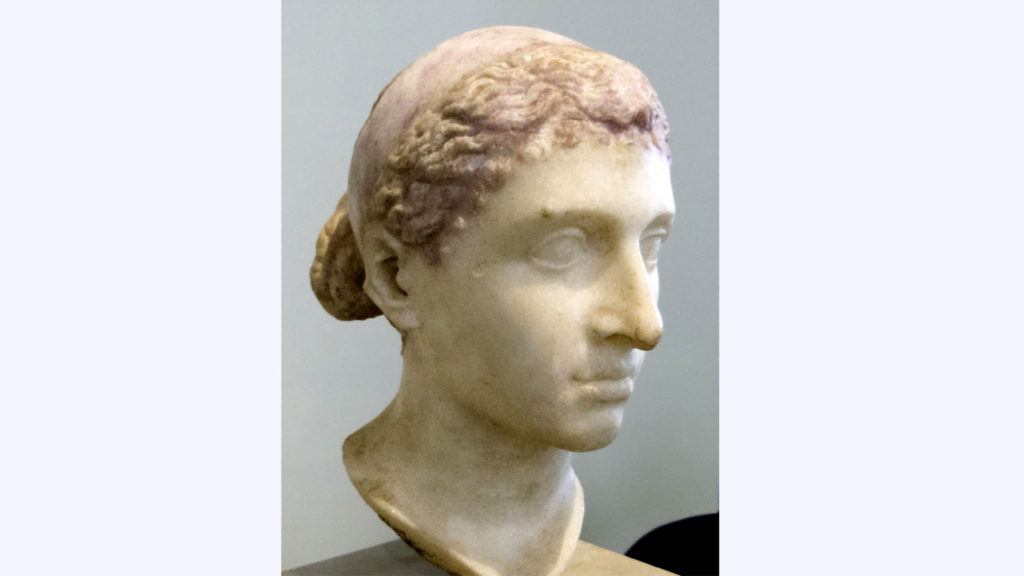 An ancient Roman bust of Ptolemaic ruler Cleopatra VII of Egypt wearing a royal diadem band over her hair; dated to the mid-1st century BC (i.e. around the time of her visit to Rome). It was discovered in a villa along the Via Appia. It is now located in the Altes Museum, Berlin, in the Antikensammlung Berlin collection. Photo: Wikimedia Commons/Public Domain

Gal Gadot, an Israeli of Ashkenazi (European) heritage, and a former Miss Universe contestant, is slated to produce and star in another movie about Cleopatra (VII), promising to capture the myth rather than the reality of Cleopatra. Tall, pale, and athletic, one doubts that much of the movie will be spent on Cleopatra’s linguistic or medical accomplishments – just saying. My relationship to the Cleopatra stories comes from teaching a subject on Black Athena to Afrocentric students in California (See Black Athena and the Incredible Whiteness of Being). Then as now, there are many things one can say about who should play Cleopatra, and I hope I manage to strike a balance. Most of the students in my class came with the vision of Cleopatra as a beautiful black queen, whose African status had been stolen by white Eurocentrists seeking to deny black people a place in history. How does one logically argue with a belief? I chose not to start with lineage. Instead, my question was, why Cleopatra?

It’s well-known in classical scholarship that Cleopatra was Greek. As Alexander the Great lay dying in 323 BCE, his generals were reputed to have asked who he would leave his empire to. His answer: to the strongest, and in fact, the Empire was divided among three of his generals, with Macedonian Ptolemy gaining control over northern Africa and southern Syria until 30 BCE. So, I portrayed Cleopatra VII to my student as the plain Jane that historians suggested she was and as a loser: the person who after 15 Ptolemys (including her son Caesarion by Julius Caesar) lost Egypt to the Romans when Octavian (Augustus) captured Alexandria.

READ MORE: Cleopatra and the end of the Ptolemaic dynasty

Instead, I suggested to my students that they choose to elevate true African heroes such as the Kushite Nubian Queen Amanasheketo, followed by Queen Amanitore. The Nubian Kingdom of Kush lasted over 1000 years, from 850 BCE to 350 CE, retaining its independence from Rome longer than Egypt. In addition, Kush ruled over Egypt for a time forming the 25th Dynasty. Finally Kush was conquered by the Axumites of Ethiopia in 350 CE. It was famous in antiquity as a source of gold and as the best source of “Egyptian” cotton.

Queen Amanishakheto quietly, but effectively ruled a nation. Having reigned from 10 BCE to 1 CE, her rule seems to have coincided with briefly with Cleopatra 69-10 or 12 BCE.

However, I was still left with the issue of addressing who Cleopatra was to my students. Rather than insisting that she was Greek and white, I read her based on the work of Shelley Haley, a black classicist, next year to be president of the Society for Classical Studies in America. Haley initially studied the Classics as a haven to seek equality, and eventually gained the confidence to question Cleopatra’s identity. We know that some of Cleopatra’s lineage was uncertain, including women of Syrian and Persian origin, possibly even a concubine. We know that Egyptian elites took Nubian concubines, however, it is quite possible that she was purely of Greek lineage. Today, one need only read the tabloid press to understand that fame is often based on notoriety just as it is often based on real achievement. Despite losing her kingdom, Cleopatra did have some notable achievements. She was the only Ptolemaic ruler to speak Egyptian rather than only Greek and she knew many other languages as well. In addition, she wrote medical treatises on hair loss, and developed a special type of soap. So, unlike the tall and athletic Gadot, she was kind of a nerd.

Returning to colour, anyone spending time in Greece or anywhere in the Mediterranean knows that people tend toward being olive skinned and appear as all other shades as well. The internet is already filled with people arguing about why Cleopatra is being played by an Ashkenazi Israeli and not an African or Arabic actress. This simply raises the even more obvious question of why wasn’t a Greek actress cast as Cleopatra? Given that Gal Gadot has used her fame and fortune to stake her claim, perhaps one of the Greek Antetokounmpo brothers can play Ptolemy.

* Louise Hitchcock is Professor of Aegean Bronze Age Archaeology in the Classics and Archaeology Program at the University of Melbourne. She is the author of ‘Minoan Architecture: A Contextual Analysis, Theory for Classics, and Aegean Art and Architecture’ (with Donald Preziosi), and is the co-editor of ‘DAIS: The Aegean Feast, Aegaeum 29’ as well as the author of over 80 articles dealing with Aegean archaeology, architecture, and theory. Her current research deals with Aegean, Cypriot, and Philistine connections. The Australian Research Council funded her excavations at the Philistine site of Tell es-Safi/Gath, where she was an area supervisor.