In the beginning was the (Greek) Word – Christianity’s Hellenistic origins 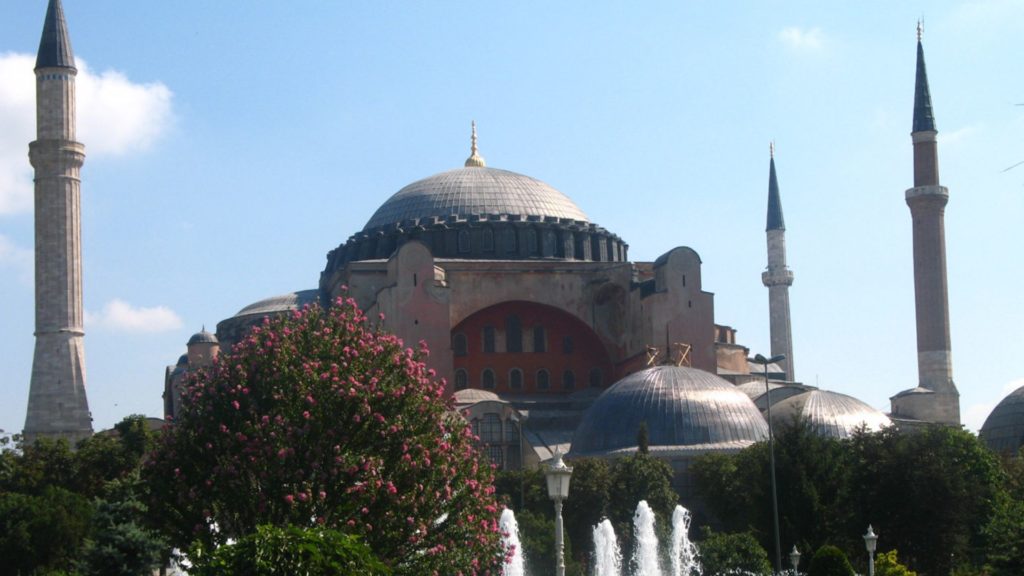 The continued sympathy towards philosophy in the Eastern church is exemplified by the name Hagia Sophia. Photo: Morguefile

“In the beginning was the Word.” Do you remember that line? Even those who have drifted away from the church might recall this opening to John’s Gospel. John continues: ‘and the Word was with God, and the Word was God’. What does it mean?

Read on, and this looks to be an account of the creation, where God-the-Father made everything through his “Word”. But it’s nothing like the creation story that opens Genesis, the first book of the Bible. In all the Bible, John alone portrays the Christ-Son as this godly medium of creation called Λογος (translated as “Word”). If we do follow John, are there then two gods?

Yes, the Son is divine and different. But no, he is one with his Father. It’s hard to explain. And across the early Christian congregations explanations varied. Disputes arose, and to such a level that by 325 AD Emperor Constantine convened the first big Church council at Nicaea, near Constantinople, to sort it out. This council finally decided that the Son is “begotten not made of one being with the Father”. If you’re not sure what that means, then you’re not alone. Back then, there was no consensus, and most bishops from the eastern congregations left Nicaea unhappy about this part of the “creed”.

Subsequent attempts to settle on John’s meaning descended into disputes over the very nature of the Christian god-head. There could be no doctrine more seminal on which to disagree. But disagreement continued down through the entire history of Christianity, sometimes defining battlelines in bloody warfare. When Islam broke away, it would look back with scorn on an apparent retreat into pagan polytheism.

The doctrine of the “Holy Trinity” (3-in-1 because it also involves the Holy Spirit) is uniquely Christian and yet absent from the Bible. Also absent are other core doctrines like those of the soul and its journey into the afterlife. Where did these come from?

The Jewish origins of Christianity are hard to miss. After all, the New Testament declares Jesus Christ the messiah prophesised in its Old Testament, the Jewish “Torah”. But the Bible is no systematic catechism. Instead, this vast amalgam of writings presents contradictory accounts of such doctrinal requirements as the nature of the afterlife and the very worshiped God himself.

In other words, to build a religion around the cryptic parables of Jesus, Christianity needed some filling out. While Judaism helped in this regard, it is not the full story. What is often missed is the Greek influences on Christianity, that Christianity is as Hellenistic as it is Jewish.

Christianity emerged 300 years after the conquests of Alexander the Great affected a mixing of cultures from the Mediterranean across to Asia. Greek was the lingua franca and Greek religions dominated, only these tended to be known as “philosophies”. The first to call their practice “philosophy” – love of wisdom (sophia) – were the followers of Pythagoras, including, most famously, Plato.

Plato never lived to see the profound influence of his teachings across the Hellenistic world, where even Judaism was infused with the love of sophia. The engine house of Jewish Hellenization was a cosmopolitan trade city on the Nile delta, Alexandria. There, the Torah was translated into Greek, and soon this Greek version became the standard authority for a dispersed population losing connection to the Hebrew language, even back in Jerusalem. New devotional texts started to appear in Greek under the influence of philosophy. Some of these “wisdom writings” carried over into the Christian Bible, including one simply called “Sophia”.

It was out of this Hellenised Judaism that Christianity emerged to taken on fully Hellenistic attributes. That divine Logos of John’s enigmatic Gospel prologue has nothing to do with old Judaism. Rather, its affinities are with a philosophical school called Stoicism. It repeats their solution to a formal problem of Platonic monotheistic creationism – how one creator can generate everything from itself and nothing else.

The “Platonising” of Christianity began in earnest after separation from Judaism was complete, when the early church fathers from Alexandria used allegorical interpretations of both the New and Old Testament to introduce philosophical doctrine. The borrowing from philosophy continued even after Constantine the Great promoted Christianity to the religion of empire. But soon the suppression of the Greek philosophical schools meant that embarrassing doctrinal borrowings were best obscured and forgotten. In the West this forgetting was expedited by authorisation of the “vulgate” Latin Bible, and links with the old Greek language were lost for 1000 years.

The “re-birth” of ancient wisdom began in the West just as Byzantine civilisation was collapsing around its great cathedral Hagia Sophia. Scholars and manuscripts arrived to enthusiastic reception. Marsilo Ficino in Florence, Erasmus in Rotterdam and Thomas More in London were among those who read and translated the Greek originals of both Platonism and Christianity and the sympathies became obvious.

Previously, the Christian religion was characterised by its exclusivity – only Christians have the true revelation. But Renaissance scholars started to find Christian wisdom not only among the pre-Christian Greeks, but across all the ancient traditions and back to God’s first teachings to Adam. This new inclusivity flourished until the Reformation, when a return to Christian exclusivism was soon enforced on both sides of the protestant rebellion. And so once again, the Hellenistic origins of Christianity were lost to West.