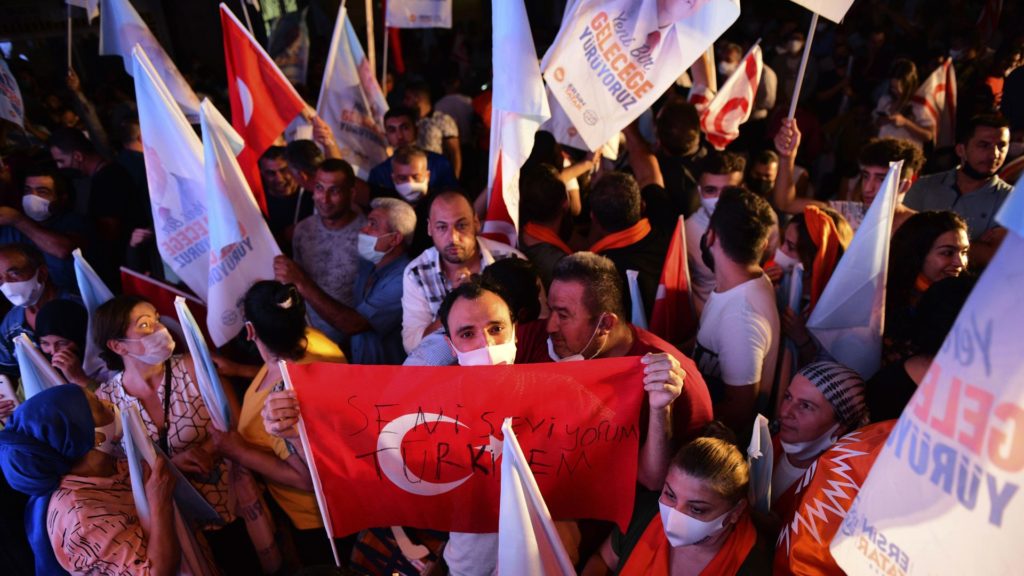 A supporter of the newly elected Turkish Cypriot leader Ersin Tatar holds a Turkish flag and celebrates with others in the Turkish occupied area in the north part of the divided capital Nicosia, Cyprus, Sunday, Oct. 18, 2020. Ersin Tatar, a hardliner who favors even closer ties with Turkey and a tougher stance with rival Greek Cypriots. Photo: AAP via AP

]Mr Tatar, who favors fully aligning Turkish Cypriot policies with those of Turkey, said any peace accord should take into account the “realities” in and around the war-divided east Mediterranean island.

“It won’t be difficult to reach a settlement at the negotiating table if our friends the Greeks and Greek Cypriots properly analyze the strategic, economic and social balances in our region,” Tatar told supporters during a victory speech after he had defeated Mustafa Akinci.

“They should know that if they continue these intransigent attitudes, we won’t give up our rights.”

Tatar also warned the European Union and the United Nations to be “fair” after their previous negotiations had failed.

“You will no longer ignore the rights of the Turkish Cypriot people,” Tatar said.

Cyprus was split in 1974 when Turkey invaded after a coup by supporters of union with Greece. Turkey is the only country to recognise the breakaway region of the north, where Greek civilians were stripped of their homes and belongings. The north is economically and militarily dependent on Ankara.

The Greek Cypriot south is the island’s internationally recognised government.