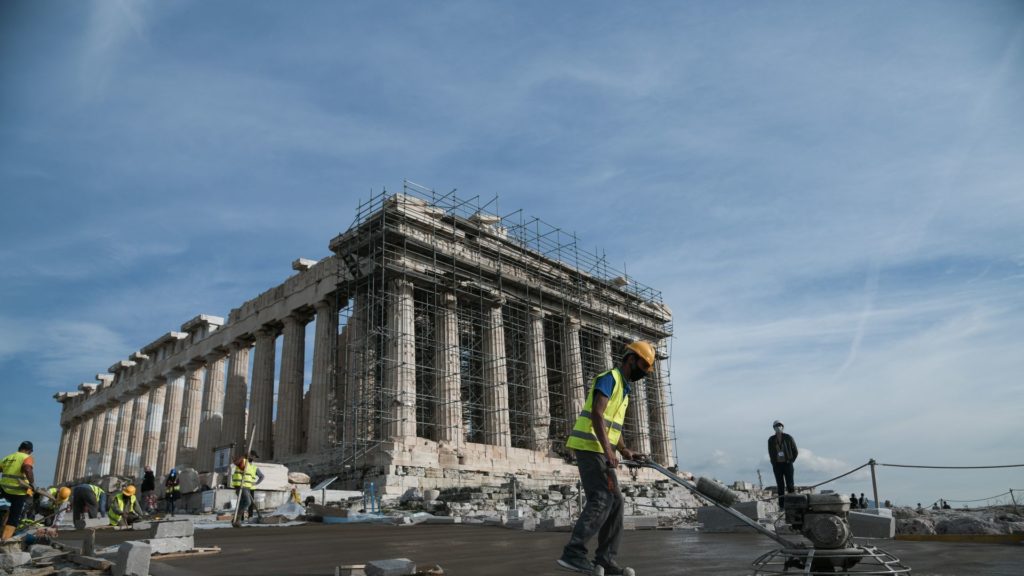 Greece’s Ministry of Culture has cemented areas around the Athens Parthenon to “improve the visiting conditions of the monuments at the Acropolis as a priority for the Ministry of Culture and Sports. With the upgrading works of the services provided in the Acropolis, the Holy Rock becomes – for the first time – completely accessible not only to the disabled, but also to citizens with mobility or other health problems,” the ministry said in a statement.

Archaeologists as well as the Greek Society of the Disabled (AMEA) have blasted the decision to cover the ancient monument with cement. Pictures of the work on social media were immediately criticised and received negative comments.

The project, titled “Configurating the Routes in the archeological site of the Acropolis for people with mobility difficulties”, was unanimously approved by the Central Archaeological Council (KAS) in May. It includes cementing areas on the ancient hill as well as an elevator for the disabled.

“The project is expected to be delivered on 3 December, 2020, together with the new, safe state-of-the-art slope lift, making he experience of visiting the Acropolis totally different,” the ministerial statement said.

“The work of paving the paths is not treated as a simple maintenance procedure of the existing network, which was built at least fifty years ago with the construction and scientific criteria of that time. It is part of the study for the restoration of the terrain of the ancient sanctuary done by the academic and chairman of the Acropolis Monuments Preservation Committee Manolis Korre, the architect with the most complete knowledge of all the monuments on the Holy Rock,” the ministry underlined in its announcement.

READ MORE:Inauguration ceremony for new lighting at the Acropolis

“The configurations, horizontally and in terms of elevation, follow the archaeological data, restoring the ancient route of the Panathinaion Street. The visitor will for the first time have the same view that the ancient Athenians had. The Panathinaion road, which starts from the Propylaea and reaches the temple of Rome and Augustus, had been paved with concrete before in 1978 and was paved with the same material several times since then to repair advancing wear.”

Archaeologists argue that the routes for the disabled could have been made by more environmentally-friendly materials instead of cement.

Andreas Angelis of the AMEA group said the project could have been completed with other constructions rather than “choking the Holy Rock in cement” and said that, apart from not respecting the area itself, the project lacked a route for blind people, a toilet for the disabled and other installations which show the real lack of intent in helping the disabled. He further added that the lift already at the Acropolis was never fixed so that it could operate.