Remembering the Hellenic Link to Anzac on 11 November 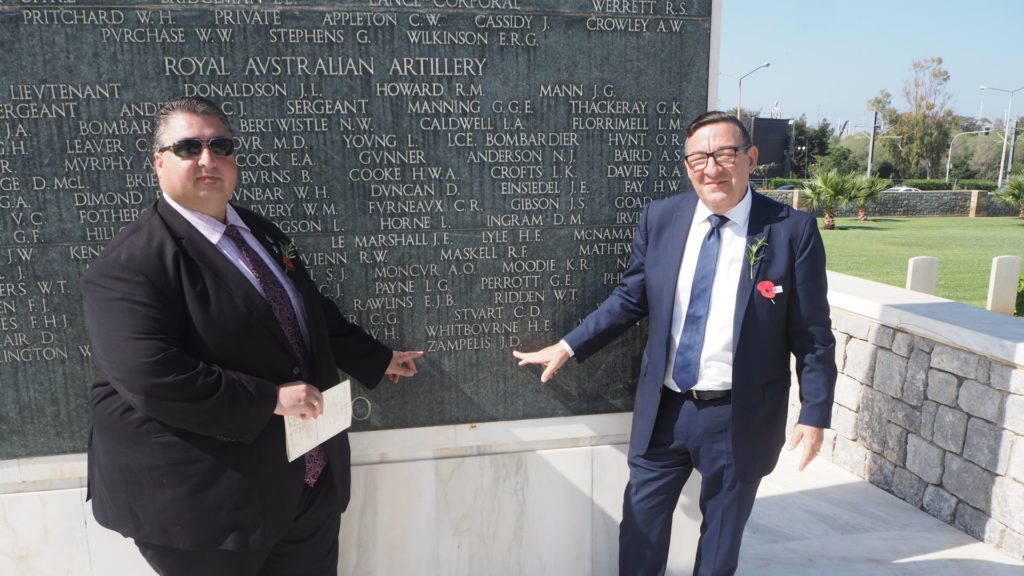 Remembrance Day is the day that we remember all Australians who served in war. It is celebrated on the anniversary of the coming into effect of the armistice that ended the First World War on the western front – 11am, 11 November.

On this day Australian Hellenes can also reflect on the service of all those Australians and Hellenes who served together in all wars, stretching back to Lemnos’ role (as well as that of the other northern Aegean Islands) in the Gallipoli campaign and the Salonka Front across northern Greece, through the Greek campaign in the Second World War, Korea, Vietnam and the other conflicts in which Australian’s of Hellenic heritage have served.

“Today on the 11th November we formally mark the end of the terrible years of the First World War and this year on Remembrance Day we also mark the 75th Anniversary of the end of WWII.

At 11am on 11 November 1918, the guns on the Western Front fell silent. Those at the front represented the final contingent of millions of men and women who had served there since the outbreak of war in 1914. And to these we add the millions more who served on the many other fronts of that war. We remember the over 416,000 men and women who enlisted, the over 60,000 who were killed and the 156,000 who were wounded or otherwise injured during the First World War. And on this day, we also remember all Australian servicemen and women who served in all wars – from the Boer War to those currently serving our country overseas. We also acknowledge the sacrifices made by families on the Homefront.

As an Australian of Greek heritage, I would also like in particular to honour those Australians who served in Greece during times of war.The over 50,000 Australians who served at Gallipoli – who came to the Greek Northern Aegean Island of Lemnos. They assembled there for the landings on Anzac Day, they trained there, they came there for rest and recreation after months at the front, they came there when sick and wounded for treatment at its medical facilities – where many were treated by the Australian medical and nursing staff serving there.

One of the doctors who served on Lemnos would go on to be a member of the Victorian Parliament and the only Gallipoli veteran to hold the office of State Premier, Major Stanley Argyle from Kyneton and Kew, whose portrait is hung in Queens Hall. One of those who also served on Lemnos and survived was a relative of mine, one Private Ted Tozer of Blackburn, a former Victorian Railways worker. Sadly some 148 Australians remain there, buried in the Island’s two military cemeteries.

These would be followed by an estimated 460 Australians who served on the Salonika Front that stretched across the borders of Northern Greece. Those who served there suffered from both the guns of the enemy as well as the diseases that ravaged the trenches and reserve areas. One of those who served there – Nurse Gertrude Munro from Ballarat – was there for three years only to succumb to disease in the final weeks of the war. She is the only Australian nurse to have died and be buried in Greece during the First World War. I have visited her grave at Mikra War Cemetery in Thessaloniki and look forward to honouring her as part of the first Salonika Campaign commemorative service which will be conducted at our Shrine of Remembrance next year.

Hundreds of Australian sailors served on a number of Australian warships – including the HMAS Yarra named after our own lovely river – as part of a flotilla that took part in major engagements in the Adriatic, the eastern Mediterranean and the Aegean between 1917 and the end of the war. These ships and their men would return to the waters of Lemnos following the signing of the Armistice of Mudros in October 1918 which ended the war in the region.

And finally, tens of thousands of young Australian men and women would come to Greece during the Second World War to play their part in the defence of Greece against the Axis forces in April and May 1941. They would take part in a fighting retreat across the length of Greece – from Vevi and Servia in the north to Brallos and Thermopylae, to Corinth and Kalamata – and on to the battles on the Island of Crete. 17,000 would serve on the mainland, 6,500 on Crete and hundreds of sailors on the ships of the Royal Australian Navy who fought the Axis forces at sea and completed the dangerous task of evacuating tens of thousands of troops to safety.

Today I would like to mention three Victorians who served in the campaign. One was Private James Zampelis of St Kilda – like me, an Australian of Greek heritage, his father coming from the Ionian Island of Lefkada. He was killed on Crete, his body is yet to be found, his name etched on the Memorial to the Missing at Athens’ Phaleron War Cemetery. Another comes from my electorate Lance Corporal Dudley “Skip” Welsh, a former factory worker from Frankston, who served in Greece and was captured, only to escape from the German prison camp at Thessaloniki, survived for months in city, helped by the locals, where he recorded vital military information, before returning to Allied lines via Imbros and Gallipoli, with the aid of a priest from Mount Athos. Finally, can I mention my good friend Norm Maddock, who served on Crete and passed away earlier this year. A fine man sadly missed by all who knew him.

In conclusion, out of the hundreds of thousands of Australians who served across all wars it is estimated that over 100,000 Australians lost their lives, with many thousands more wounded and sick as a result of their service. And at home millions have been affected by the loss and injury as a result of the service of loved ones. Their sacrifice is a reminder to all of the importance of preserving peace in the world. Today, we remember all of these Australians. Lest we forget.”