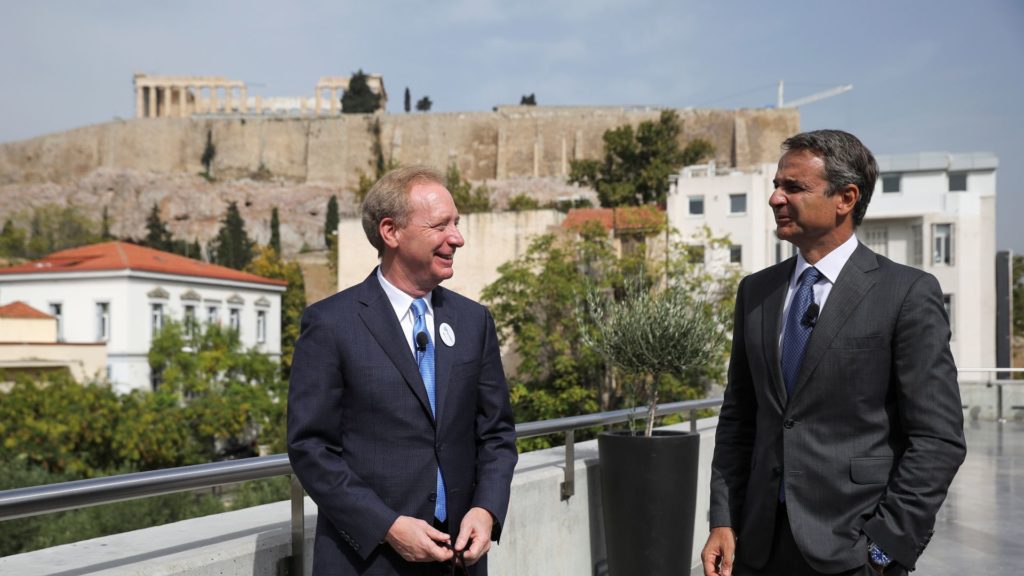 The president of Microsoft, Brad Smith, speaks to Greek Prime Minister Kyriakos Mitsotakis, during an event to announce the company's new investment in Greece that was held at the Acropolis Museum in Athens, Greece on October 5. Picture: Costas Baltas/AAP

At the start of the year, Greece had reached a stage where its economy seemed to be emerging from the debt crisis of the last decade. Then COVID-19 struck and the country went into lockdown. There was a 15.2 percent drop in output in the second quarter of the year while unemployment rose to 18.3 percent from 16.4 percent at the beginning of 2020.

By summer, the imperative was to reopen the country to salvage what it could from tourism. The announcement of the Microsoft investment was good news to a country which, thanks to COVID-19, was increasingly seeing benefits of moving economic activity to the online realm and helping to reduce its dependence on tourism – a stated aim of the Mitsotakis government.

The announcement of the investment at the New Acropolis Museum was the result of nine months of negotiations and tagged to the agreement is a training component for 100,000 private- and public-sector workers along with additional training for educators and students.

The plan will lead to the construction of three data-storage centres in Attica. Another stated aim of the deal was to galvanise development in the technology, energy and defence sectors and to ultimately lure back the thousands of professionals who left Greece as a result of the debt crisis.

“A Microsoft datacenter region provides a competitive advantage to our digital economy. At the same time, it is a long-term investment and a vote of confidence in our country’s potential. The cloud is transforming every industry and sector. The investment in skilling 100,000 citizens will empower today and tomorrow’s Greek workforce,” said Mr Mitsotakis in announcing the deal with Microsoft.

He said the deal would: “… position the country among the digital leaders of Europe. A Microsoft datacenter region provides a competitive advantage to our digital economy.”

“It does not only mean foreign capital, more income in public funds, new highly specialized jobs. It also implies a quality added value. Analysts will talk about a total economic benefit, in the long run, which may exceed 1 billion based on the experience of other countries,” said Mr Mitsotakis.

Microsoft said in a statement that the deal would open the way for local companies, startups and institutions “to fully utilize the potential of cloud computing, while maintaining the highest cybersecurity, data residency and compliance standards.”

“The Greece datacenter region will join Microsoft’s global footprint of cloud regions, now totalling 63 regions announced, with Microsoft Azure available in over 140 countries, and will provide companies local access to Microsoft’s full set of cloud services, all built on a foundation of trust,” said Microsoft.

The CEO of Microsoft Greece, Cyprus and Malta, Theodosis Michalopoulos, said:  “It will be the first data centre in the wider region and one of the first in Europe. … This infrastructure aspires to further accelerate the digital transformation of the country.”

Greece’s Ministry of Culture and Sports was working with Microsoft on a project that will bring to digital life the Ancient City of Olympia as it was 3,000 years ago using artificial intelligence and other technologies. The project, approved by the Archaeological council (KAS) will be available in 2021.

In May this year, Microsoft announced plans to create a Robotic Process Automation (RPA) development centre in Greece. The news of this followed Microsoft’s acquisition of Softmotive, a UK-based company founded by Marios Stavropoulos in 2005 that was a pioneer in RPA.

The acquisition of Greek technology company Think Silicon (founded in 2007) by Applied Material, along with the Softmotive acquisition, were further milestones in the development of high technology in Greece said Mr Mitsotakis in May.

In its October newsletter, Enterprise Greece reported that Greece, because of its fast -growing startup scene (there are about 2,000 start ups), has attracted investments worth more than €350 million. These investors include Daimler and Samsung.

The Greek tech industry is estimated to soon account for about 10 percent of the Greek economy. A recently conducted Ernst and Young (EY) survey found that over the last three years 15 percent of foreign investment was aimed at the country’s technology sector.

The newsletter said Greece boasts a higher number of STEM (Science, Technology, Engineering and Maths) students and graduates than the OECD average. There are 37 member states in the OECD (Organisation for Economic Co-operation and Development).