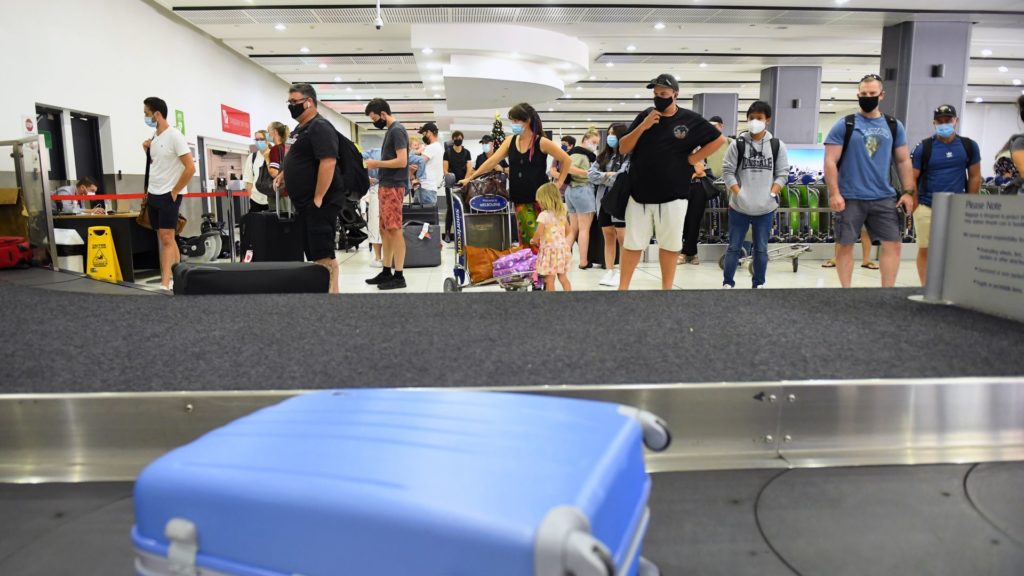 Melbourne Airport Brisbane arrivals who managed to make it to Victoria just before border closures will need to get tested and self-isolate. Photo: AAP/James Ross

There are 40 active cases in the state, including those in hotel quarantine and no COVID-19 cases in hospitals or ICUs.

Testing figures do not include more than 10,000 results held on Friday due to a malfunction at a testing lab. The last confirmed local infection was on Wednesday when the MCG and Chadstone Shopping Centre were listed as possible acquisition sites for a mystery case of the virus which authorities have yet to confirm the source of. Genomic sequencing has linked the strain to the outbreak in Sydney’s northern beaches.

The source of the Black Rock cluster, which grew to 27 cases, also remains unknown. There are currently 2,000 people isolating or in quarantine for 14 days after being deemed close contacts by visiting or coming in contact with a positive case.

Victorians in Brisbane have been told to stay their until the end of Monday, as the state has officially closed its borders to Greater Brisbane, including the Brissbane City COuncil, Redland City Council, Ipswich City Council, Moretan Bay Regional Council and Logan City Council. People who have already arrived from the region need to get tested and isolate until at least 6pm on Monday after a potentially catastrophic outbreak escaped hotel quarantine after a cleaner tested positive for it.

There was 1 case notified to the department in the past 24 hours. This includes 0 locally acquired and 1 in hotel quarantine. There are currently 40 active cases, and 28,337 tests received – thank you for getting tested. #Everytesthelps https://t.co/2vKbgKHFvv#COVID19VicData pic.twitter.com/ougMw6iqfN