How the Spartans would fight COVID-19

Best selling author of Gates of Fire, and honorary citizen of Sparta, Steven Pressfield, uses a Spartan analogy for the use of face masks 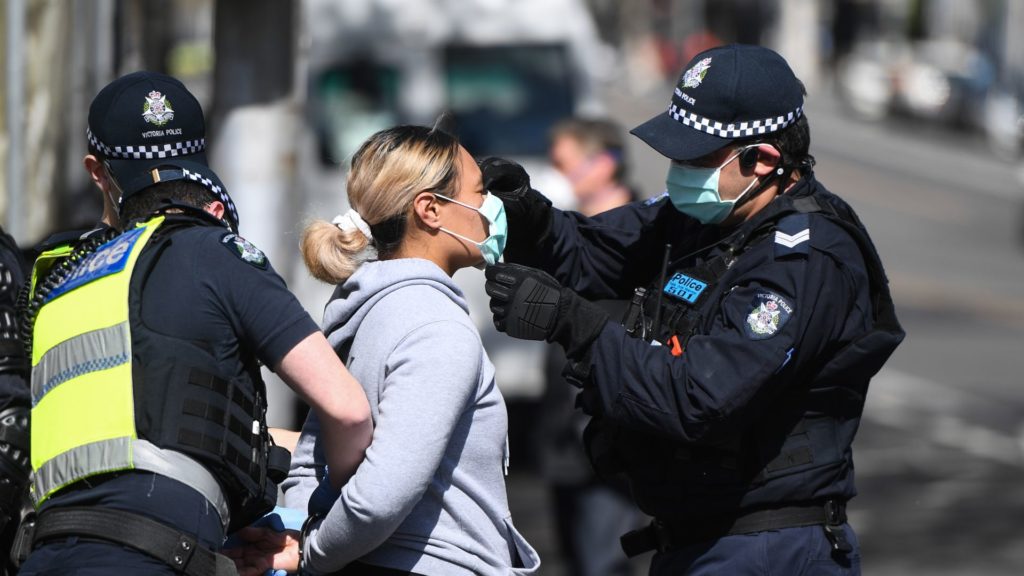 ‘The real Spartan wears the mask as a shield’. Police put a mask on an anti mask protester during the second lockdown in Melbourne, September 2020. Photo: AAP Image/Erik Anderson

A (true) question from antiquity:

Why do the Spartans punish with a fine a warrior who loses his helmet or breastplate in combat but punish with death the man who discards his shield?

” … for the protection of the whole line.”

The true answer, from Plutarch:

In ancient phalanx-type warfare, the formation advanced upon the enemy with shields overlapping, so that one warrior’s shield protected himself and, partially, the man next to him. The aim was to present to the foe an unbroken, impregnable front of armour.

The enemy’s objective of course was to break through this front, to create a breach into which his forces could flow. One failed shield and the whole army could be lost.

Now a question from the war you and I are fighting today:

Why are we asked to wear surgical or face masks in public, to practice social distancing, and to observe self-quarantining?

Because these practices are not for the individual alone but for the protection of the whole line.

We’ve seen protesters in in the US [and Australia] demonstrating their resistance to such public health directives. They carry signs saying I WILL NOT COMPLY and DON’T TREAD ON ME. The demonstrators take offense at such communal safety measures, characterising them as “government overreach.” They declare that such mandates violate their personal freedom.

Would we accuse the ancient Spartans of “government overreach” if they mandated that each warrior, facing the enemy, hold his shield before him and not abandon it and run away?

Suppose one warrior did cast away his shield and flee, thus opening a breach in the phalanx’s front? Would the Spartans excuse him if he explained that he took such action as an exercise of his “personal freedom?”

Steven Pressfield is the author of “Gates of Fire,” a bestselling novel about the 300 Spartans at the battle of Thermopylae. In 2006 he was made an honorary citizen of the city of Sparta in Greece. He has given Neos Kosmos permission to re-publish the above opinion from his blog stevenpressfield.com