Early Greek Settlers: Pandemic, racism and the Greeks of Port Pirie in 1919

Port Pirie Railway Station in the early 1900s. April 4, 1919, 50 Greeks were ready to depart Port Pirie via Rail due to the Pandemic. The authorities refused their departure due to restrictions. Photo: Courtesy of Ron Blam, Collections and Photos of the Past’

Two solitary entries occupy the marriage register of the ‘Evangelismos’ Greek Orthodox Church, East Melbourne in 1918, both formally recording the weddings of the Kondoulas brothers, Georgios and Dimitrios, to their promised brides. All four were residents of Port Pirie, South Australia and all born on the island of Kastellorizo. In a period of less than 10 months, the Kondoulas brothers occupy the Church records, however this time as entries in the death register. Unfortunately, the register does not provide details for the “cause of death”.

Within this gap, between the two church records, a tragic story unfolds. An unknown story which references a lesser known Greek Community, that of Port Pirie South Australia, and the consequences of the Spanish flu in 1919. The narrative follows and illustrates the trauma, devastation and alienation that members of this Greek community were confronted with.

The year is 1919 and the Great War had just ended in November 1918. At the Port Pirie smelter approximately 80 Greek males are employed, all breadwinners. The Greek community of Port Pirie was evolving with the influx of promised brides specifically from the island of Kastellorizo.

A few years prior, with the advent of First World War, a significant labour shortage emerged in Australia. This vacuum provided the opportunity for many immigrants to join the workforce. From 1914 onwards many young Greek immigrants entering Australia commenced working in a domain previously dominated by white Anglo-Celtic workers.

An estimated 200 Greek immigrants worked at the Port Pirie smelter throughout the War, making the smelter the largest single employer of Greeks at that time.

The social climate however at Port Pirie took a drastic turn, and with the return of Australian soldiers to Port Pirie after the end of the War, racist hysteria commenced to escalate.

The racist narrative contrived by the local Port Pirie newspaper together with the prevailing xenophobia amongst many citizens of Port Pirie evolved into a scaremongering campaign against the local Greek community. Judging by the numerous derogative articles that appeared in the local newspaper the Recorder it emerges that the Greeks of the town were the main victims of such racist taunts.

The frequency of police raids on Greek Cafes in the town pre-occupy on many occasions the columns of the Port Pirie Recorder throughout that year. The fines were significant in comparison to the offences and in certain instances, the offenders were not even charged.

Titles such as “Greek Café Raided-Eighteen Persons Arrested. Gambling Charges Preferred” and “Police Raid Cafe – Charges in Police Court to Follow” appeared in the columns of Port Pirie’s daily newspaper. Subsequently we learn that in the first instance that just one defendant was fined £5 and in the latter case after a search of the Café only “nine bottles said to contain ale were discovered under the counter”.

Unlawful assaults against Greeks became a common occurrence and even a demonstration against Greeks was held which resulted in property damage and physical injuries. The following extracts are from the Port Pirie Recorder that were published 24 February and 17 April 1919 respectively:

“On Saturday forenoon, in Casino Lane, off Alexander Street, a crowd of young fellows made a demonstration against some Greeks who live in the locality. They indulged, first of all in boo-hoos and jeers and then started throwing bricks and stones. Some windows were smashed. A woman was hit on the hand and her baby on the head with pieces of brick”. During this incident 14 arrests were made however only two of the participants were summonsed to court. The next newspaper extract refers to the “Grasshopper Gang”, allegedly a group that consisted of returned war veterans and other younger male members aligned with the veterans.

“A number of young members of the ‘Grasshopper Gang’ assembled opposite the entrance to Casino lane. They attacked a well-known Greek resident and gave him a severe handling. Two arrests were subsequently made by Constables Ferguson and Harvey.”

Evidently many war veterans directly contributed to the racial discrimination and harassment of the Greek population of Port Pirie. The emergence of vigilante groups, mass hysteria, racial and physical abuse were interconnected with the ethnic integration of the workforce in Port Pirie. These war veterans felt both socially and financially disadvantaged, as well as a sense of entitlement to employment due to their loyalty to the nation.

At the same time, those Greeks working at the Port Pirie smelter were accused for their militancy and were targeted as agitators by the media. In describing a stop work meeting at the smelter the journalist notes in their column under the heading of “No Strike at Smelters-Stop Work Meeting Unsuccessful” that “almost the whole of the precessionists were foreigners or single men and similar elements predominated among all who left work.” As for the march from the smelter to the Union Hall the columnist points out that “The advance guard of the 57 were mostly Russians, Bulgarians and Greeks.”

Clearly it was perceived by many that the leaders of such unacceptable disruptions were “foreigners” with the main core group being Greek workers.

Reports also appeared claiming that Greek labourers were occupying jobs that should be prioritised to war veterans. In the Northern Territory, at that time, the Waterside Workers Union of Darwin “debarred Greeks from obtaining employment wharf” and argued that “It is felt that while returned soldiers cannot obtain employment in Darwin Greeks should not be favored.”

The secretary of the local AWU branch in Darwin in commenting on foreign workers noted: “I think however that the foreign element – Greeks and Russians – would be easily enticed to revolutionary actions. The majority of the Labor men are fairly moderate.”

There was a prevalent fear, even amongst the Union ranks, that Greeks and other foreigners were hijacking the labour movement, and by sheer force of numbers, were endeavouring to numerically dominate work meetings in order to achieve favourable outcomes.

In this tense climate, the Spanish flu hits the town of Port Pirie and even more so its fledgling Greek community.
The Port Pirie Recorder, 1 April 1919, under the heading “Yesterday’s Deaths” reported that amongst those who succumbed to the Spanish flu the previous day were two Greeks; John Hagenakis, aged 35, married with his family residing in Greece and Michael Karegos, aged 23 single, both smelter workers.

Two days later under the title “Two Deaths Yesterday” the readers of the same local newspaper were informed that another Greek smelter worker Jimis Spais, aged 34, died in hospital only three days after he was admitted. Once again, the cause of death was attributed to pneumonic influenza (Spanish flu).

The first deaths of Greek smelter workers sent the Port Pirie Greek Community into a frenzy and in the early hours of the next morning (4 April, 1919) nearly fifty Greeks congregate at the Railway Station to hastily depart. Unfortunately, due to restrictions none of those compatriots had acquired a departure permit and they were all forced to return to their place of residency for the time being.

The tragedy continued with the following article appearing in the Recorder 7 April 1919 under the title “Third Death in One House”.

“The death took place yesterday morning of Jim Kondoulos, a Greek, who lived in the same house in Port Pirie West in which two other Greeks have died, G. Kondoulos, a brother and Alexis.” 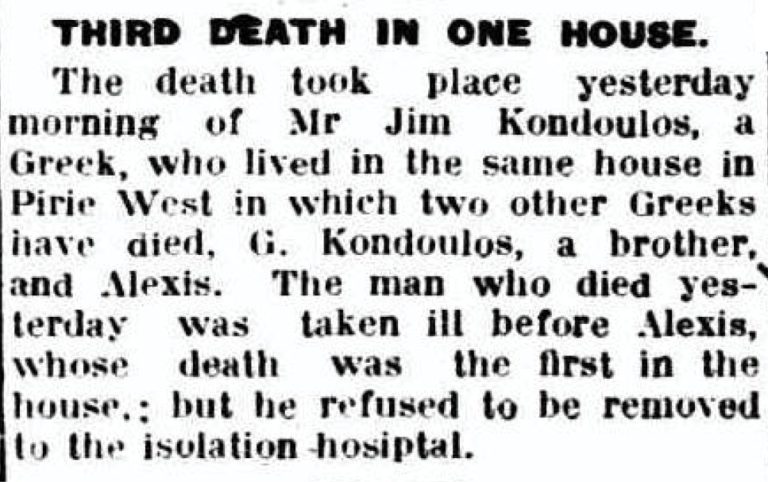 Two days prior to Jim Kondoulos’ death an opinion piece appears in the Recorder titled “Isolation – A Farce”. The article refers to the Greek household occupied by the Kondoulos brothers and others and comments on the “the laxity of arrangements”, remarking that “these people are allowed to egress and ingress, in spite of the yellow flags.”

The bewildered journalist continuous by remarking that “children from isolated houses are allowed to have contact with other children. Is it any wonder, under such circumstances, that the epidemic has spread.” In view of such breaches, the author furiously concludes “The house occupied by the Greeks in Pirie has been a menace to the health of the community. It is still a menace.”

After the death of the last male occupant of the Kondoulos’ household all remaining occupants were admitted to Pirie’s isolation hospital. The youngest was baby [Dimitra] Kondoulos who lost her father two days prior and who according to newspaper reports “was immediately installed as hospital pet and as her arrival coincided with the improvement in the epidemic she can claim to be the mascot of Pirie’s influenza hospital.”

Sadly, elements of mistrust and spitefulness are interwoven throughout the article, using as a scapegoat a vulnerable community. These immigrants with limited or no English skills and certainly without any understanding of the consequences of the deadly virus became further marginalised in an already racist environment. One cannot even imagine the hardships endured by these Greek immigrants during this pandemic.

The fear of a Pandemic now also became the fear of Greeks in the town Port Pirie.

In total, six Greek males between the age of 23-35, all smelter workers, died within nine days due to Spanish Flu. No other nationality in Port Pirie had suffered such a loss.

In an extraordinary unusual step, the then Alien registration officer for Port Pirie, Mr Warnes, publicly denounced the “treatment meted out to them [foreigners]” and further said “under his notice that a certain section of youths and others of mature years are in the habit of hurling insults at the aliens more particularly at the Greek”.

Although the authorities and residents had assumed that the pandemic had subsided a so termed second visitation of the Spanish flu hits Port Pirie in June of that year with another two Greeks succumbing to the deadly virus.
Victims of the second visitation are Panagiotis M. Tsolakis, aged 18 and John Kominos, aged 30, both smelter workers and from the island of Kastellorizo. Sadly, both died within consecutive days 17 and 18 June, 1919.
The tragic death of eight young Greek workers due to the Spanish flu pandemic further isolated the Greek community of Port Pirie causing a mass exodus of many of its members.

As the second visitation of the Spanish flu dissipated an increasing number of Greeks were abandoning Port Pirie for other States. Judging by the movement records of Greeks at least 30 Greek males moved to Melbourne by the end of 1919. Many more Greek smelter workers also moved to other States. The number of Greeks in Port Pirie for a short period began to dwindle only to increase once again in the early 1920s.

Note: Transcription of the Death Certificates-provided by the South Australia Genealogy Society

Costas Markos is a board member of the Greek Community of Melbourne. This article is the second in a series of 10 articles on Greek migrant history in Australia, and has been written in memory of victims of pandemics and discriminations. References and resources: Australian Newspaper Archival Collection. Trove; Genealogy Society – South Australia. Births, Deaths & Marriages – South Australia; Greek Orthodox Community of Melbourne – Death and Marriage Register; Georgia Juliana Charpantidou, “Greek Orthodox Community of Melbourne & Victoria: sociological approaches” (working title), doctoral thesis, Panteio University of Athens (in progress) With thanks to Kostas A., Kostas K. and Nikos P.