Early Greek Settlers: The first Greek-Orthodox wedding in Australia in 1898 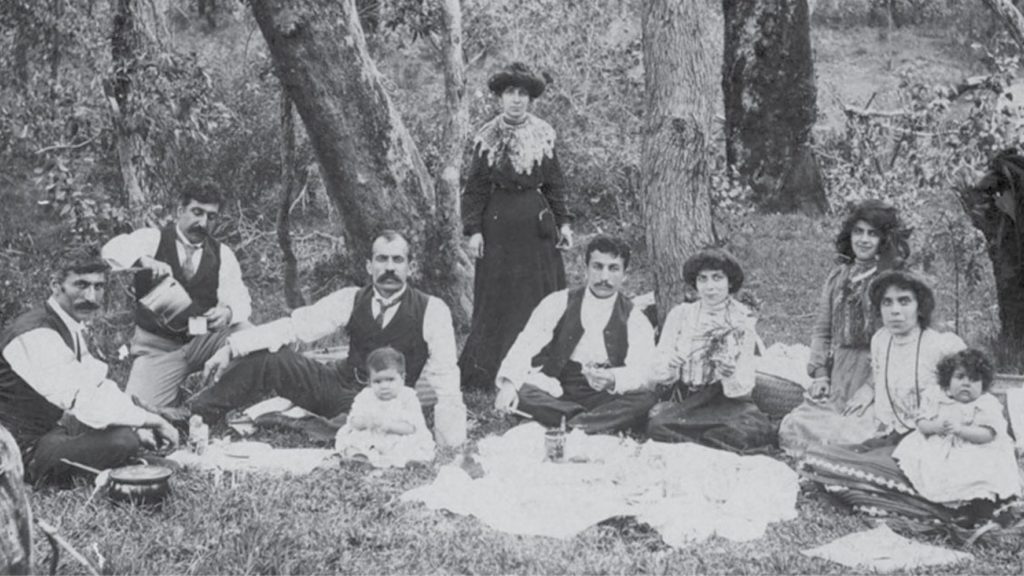 Historical accounts and descriptions of early Greek-Australian events and ceremonies are by all indications a rarity. In contrast to today’s consumer society, the advancement of technology has made it easier to capture and showcase the memories of an event or a ceremony.

In many instances, when articulating our Australian Greek history, it seems fashionable to use anecdotal evidence as a means of information.

It is a relatively rare occurrence to discover a text or a testimonial that records with accuracy a Greek Orthodox sacrament that took place in Australia for the first time. In this instance we are referring to the first officially acknowledged Greek Orthodox wedding in Australia that was solemnized at St John’s Greek Orthodox Church Melbourne, on November 20 1898 by Fr Athanasios Kantopoulos soon after his arrival to Australia from Jerusalem.

Oddly enough, the article which refers to the first marriage was found in the New-Zealand newspaper Otago in 1899 written under pseudonym the ‘Baron’. It should be noted that an almost identical article was subsequently unearthed in a local newspaper in late 1898 written by ‘Larnook’ (pseudonym).

READ MORE: The chronicles of George Manuel, the first Greek settler in Australia – 1811 A first-hand description of the wedding ceremony

The opening sentence of the article prepares the reader for a unique insight to the ceremony and importance of this sacrament to the Greek Orthodox faithful with the following lines: “A very peculiar wedding ceremony, according to the strict rules of the Orthodox Greek Church took place yesterday at the building devoted to that faith in Melbourne.”

The first Greek Orthodox wedding that was conducted in Melbourne, by all reports, was a social event that gathered the interest not only of the Orthodox faithful of Melbourne but also of many curious observers. The article describes the vibrancy of the event with the extraordinary number of attendees: “a vast crowd congregated inside and outside the place of worship: while an immense number of carriages bought the guests, who assembled in a part reserved for the wedding party.”

The grandiosity of the wedding event, as described by the author, perhaps indicates the socio-economic status of the participating families. Such a phenomenon was parallel to middle class weddings of the Victorian era, through which such special occasions provided the opportunity for families to exhibit their wealth.

The ornateness of the bride’s wedding dress and the other elements described throughout the article, are closely aligned the socioeconomic status of the couple. The vividness of the bride’s attire is surmised by the author in a single sentence: “The fiancée, a very pretty young Syrian, was exquisitely robed in white brocaded satin, gold and bead embroidered with delicate silken veil and orange flower wreath.”

The author’s eye for detail is both effective and vibrant, as the following paragraph attests: “I observed a beautifully engraved silver tray, on which at one end were laid two particularly large candles, tied in the centre with broad blue ribbon streamers; and also two wreaths of real orange blossoms and a maidenhair fern, with long ends of white satin ribbon.”

The testimonial also presents a cross-cultural element of the marriage ceremony that took place on the day; intertwining references to Syrian, Greek and Russian Orthodox cultural characteristics “In the centre of the table rested a crimson velvet, gold-bound Russian Bible, which is so reverenced by the Greeks that no one but the priest is allowed to handle it.” The author not only evokes powerful and colourful images throughout the narrative but also describes both the Betrothal and Marriage services in a detailed manner. The article illustrates the blessing of the rings in the following manner:

“The plain wedding ring the priest laid against the bride’s forehead, and also against that of her intended husband, before crossing her with it on the breast and placing the ring on the third finger of the right hand, over her glove”

As for the crowning of the bride and groom in another paragraph the author observes: “With this (the wreath) he formed the sign of the cross three times over the Bible, first over the bridegroom’s head, and then over the bride’s head, ultimately leaving the wreath on the head of the former” and “The second wreath was treated similarly, being then left on the head of the bride, above the veil and over her own wreath, which gave the appearance of wearing a high crown”
The author’s ability to provide vivid images, almost lifelike, that accurately describe Fr Kantopoulos can be found in the following sentence: “most magnificently attired, completely in white satin, silver woven brocade, embroidered with gold; the head was uncovered and his thick long curls were tied together, thus clustering at the neck and falling in a rich mass on the shoulders”

The ‘Baron’ provides us with a first-hand experience of what occurred throughout the wedding ceremony, at times with a notion of reverence, successfully engaging the reader with rich visuals that provide an intimate insight of a wedding ceremony in according to the rites of the Greek Orthodox faith.

But rather than analysing and evaluating the descriptive article in totality, a few paragraphs of the text have been selected to accompany the narrative

The marriage ceremony described was that of a Syrian Orthodox couple, Khaleel Saleeba and Nazeera Keamy both born in the City of Zahlé, Mount-Lebanon. The bridegroom at that time was a resident of Moora Western Australia and the bride a resident of Melbourne.

The bride, Nazeera Keamy, was born in Zahlé Mount-Lebanon in 1882 and arrived at Melbourne in 1893. Her father was the well-known Syrian Tanus Peter Keamy, a draper by profession, who resided on Little Lonsdale St Melbourne and her mother was Susan Keamy (née Abozayan)

In this case the first Greek Orthodox marriage transcended the borders of then Colony, with the groom residing in Western Australia and the bride in Victoria. Most likely an arranged marriage, it represented a union of two of the most prominent Syrian families at that time.

After the wedding celebrations the newlyweds returned to Moora West Australia where Khaleel Saleeba had multiple business interests. They had six (6) children, of which four survived and many of the couple’s descendants still reside in Western Australia.

Throughout their lives the Saleeba couple kept a close association with members of the Western Australian Greek Community and in particular with one the most prominent Greeks in Perth, Mr. Peter Michelides, who also baptised their child, Alexander.

On 20 November, 1948, in the newspaper “Western Australian” an insert appeared announcing the couple’s 50th wedding anniversary. Both Khaleel & Nazeera lived a long and celebrated life amongst family and friends, leaving a legacy to the Christian Orthodox community of Australia.

The marriage certificate issued by the Victorian Government authorities reveals numerous details of the status of newly established Greek Orthodox Church in Australia. The father of the bride was Tanus Peter Keamy leader of the Syrian Orthodox Community in Melbourne, considered the nexus between the Syrian and Greek communities of that time. Keamy in fact is acknowledged as the person who recommended to the Greek Orthodox faithful of Melbourne to seek the appointment of the Arab and Greek speaking priest Fr Athanasios Kantopoulos. Together with Alexander Maniachi, these two prominent individuals, made every possible effort for the establishment of an Orthodox Church in Melbourne to become a reality.

The marriage certificate additionally manifests an unwritten binding agreement between the Syrian and the Greek Orthodox faithful of Victoria; endorsed and sealed with the signatures of both Maniachi’s and Keamy as witnesses to the ceremony. The first Greek Orthodox marriage certificate issued signifies the commencement of a collaboration of all the orthodox faithful of Melbourne, irrespective of their race or ethnicity. The collaboration endeavoured to achieve equal footing within the Melbourne community during an era of Anglo Celtic cultural and religious domination. In effect, the marriage of Khaleel and Nazeera signifies a symbiosis of the Orthodox faithful of Melbourne at time.

Their efforts however were destined to fail and by 1902, only a few years after the first Greek Orthodox marriage took place, a clear divide between the two nationalities emerged; a bitter animosity that clearly influenced the course of the Christian Orthodox faith in Australia.

We also discovered that the first Greek Orthodox Church itself was located at Gipps St West, East Melbourne-today St Andrews Place. At this location, the first liturgies commenced on Sunday 22 August 1897 with the visiting priest Archimandrite Dorotheos Bakaliaros Samios.

Of notable interest is that the first Greek Orthodox Church was in fact named “St. John Greek Orthodox Church” as indicated on the Marriage Certificate. The church was consecrated by Fr Kantopoulos who was legally authorized as a celebrant in Victoria; officially acknowledged by both the Victorian Government and the ecclesiastic authorities of the day.

By July 1898, with the presentation of Kantopoulos’ credentials to the Chief Secretary of the Colony of Victoria, the first Greek Orthodox Church in Australia receives its legal status to serve its faithful in the Colony. From here onwards the Church could legitimately conduct wedding ceremonies and register marriages according to Victorian legislation.

The first officially solemnised Greek Orthodox marriage in Australia on 20 November, 1898 celebrates the commencement of thousands of Orthodox weddings that took place in Australia. For many, the celebration of their marriage in a Greek Orthodox Church provided comfort and surety in an unknown and many times hostile landscape that eventually became their ‘home’.

This is the third of a 10-part series by Costas Markos, a board member of the Greek Community of Melbourne. For the above article, the following references and resources were used: Office of Births, Deaths & Marriages – Victoria; Archival newspaper collection -Australia (TROVE); Hoken Collections-University of Otago; Public Records of Victoria; Selected images from the Keamy & Saleeba families (Ancestry.com); with thanks to Kostas A., Kostas K. and Nikos P.