Self-confessed hopeless romantic, Dora Houpis, met the love of her life, Kosta, over a dungled takeaway souvlaki order, during the height of last year’s hard lockdown, in Melbourne. But a mishap with vegetables has put their relationship on hold and she will be spending this Valentine’s Day alone. 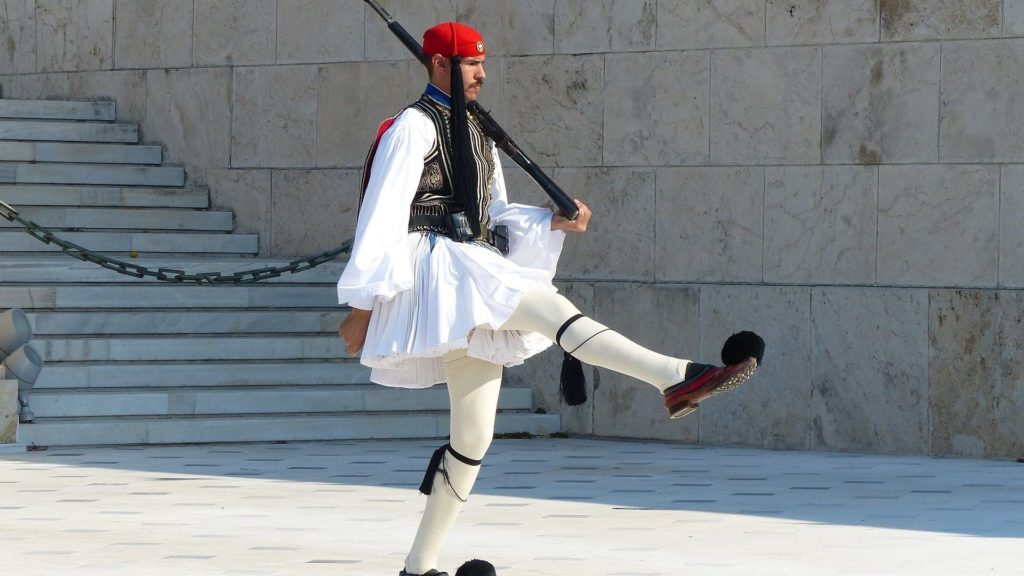 But with Kosta still in Greece, I need help to finish the tapestry in time for the bicentenary of Greek independence, on 25 March. Photo: Pixabay/Martin Fuchs

I BELIEVE in romance.

Just ask the past four men I dated.

They came with me – but not all at the same time – on my life’s journey to find love.

There was straightforward Socrates* who ended our nine-month relationship with the unambiguous text: “Thank u 4 meeting. All the best 4 ur future,” before disappearing into the Valley of the ex-Boyfriends.

Then there was scholar Shaun. He wrote me letters, notes, thank-you cards, name-day cards, sorry cards.

Nearly 20 years after he too emigrated to the Valley of the ex-Boyfriends, he sent me a Christmas card. He wanted to meet. He also wanted to show me his thesis. It was in desperate need of a second opinion, he wrote, and if I were to get the urge to subedit his tome as I read it, he wouldn’t mind.

There was also Telstra Telemachos. He was always happy to see me when we went out, but he had issues with Telstra. Basically, he never called. Years after our dalliance ended, I saw him at a tram stop and offered him a ride.

It was like old times, laughing and flirting. Before I dropped him off, he promised to call me. That was in 2010.
I don’t want to be negative, but I don’t think he’s going to call.

Break-it-to-me-gently Gideon, on the other hand, had no problem using the telephone. He rang me at the beginning of Greek Easter holy week a few years ago to end our three-year relationship.

I wondered what he was trying to tell me and had a joyous Palm Sunday, a spiritual Good Friday, an uplifting Holy Saturday and a great Easter Sunday anyway.

But, you can’t hurry love and love happens when you least expect it, like during a global pandemic.

I met my soul mate, Kosta, during Melbourne’s hard lockdown last year. We met in the city’s famous Hellenic precinct, Eaton Mall, in Oakleigh, after a takeaway food mix up.

He mistakenly took my souvlaki without tzatziki: I took his three-meat gyro with tzatziki. He ran after me. All I could hear was a man singing Petros Iakovidis’s hit song, ” Σ’ Αγαπώ Σου Φώναξα ” ( I love you I shouted).

I stopped. Kosta introduced himself. He came to Melbourne from Greece two years ago to teach. We discovered we were “κοντοχωριανοι” and from the same part of Greece.

I from the last village in the north-eastern prefecture of Serron, named Nea Kerdillia, Kosta from the capital, Serres. We swapped our food and sat down on a bench, 1.5 metres apart, to eat. We promised to go out once Melbourne’s lockdown lifted.

That’s just what we did on 28 October, the day the Victorian government lifted restrictions. The day coincided with Greek Independence Day and Kosta sang patriotic songs by Sophia Vembo.

We saw each other every day for nearly two months.

We ate lunch every day at different Greek restaurants in Oakleigh. We shopped at the fresh-food stores in the mornings. At night, we took up the Prime Minister, Scott Morrison’s, advice on how to cope with coronavirus restrictions and did jigsaw puzzles. We did one based on the photograph Lifeguard of the Greek head of state. Soldiers dressing. 1935 , by photographer Alfred Eisenstaedt. I framed the completed jigsaw and sent it to the Prime Minister.

Mr Morrison was so impressed, he wrote to tell us he had hung the jigsaw puzzle in his prime ministerial office in Canberra, and wanted us to do an embroidery for Parliament House. It could be the Greek community’s gift to the nation to mark modern Greece’s bicentenary this year, he suggested.

“The work will pay homage to the centuries-old tradition of hanging tapestries in grand buildings,” Mr Morrison wrote.
So, Kosta and I started a tapestry depicting the heroes of the Greek War of Independence against the Ottoman Empire, between 1821-1832.

But my relationship with Kosta transcended eating, jigsaw puzzles and embroidery. Kosta taught me how to park on footpaths and the art of double parking.

I taught him how to pick “χορτα” (wild dandelion greens) on road sides and vacant building blocks.

But the last vacant block was private property and police said we were trespassing. They saw our paring knives and plastic garbage bags and asked if we had a valid reason for carrying knives in public.

The police officer did not believe we were gathering “χορτα” because he said no Greek girl would break up her mother’s 24-piece stainless-steel knife set and use two knives to cut out dirty weeds.

So the police confiscated the knives, told Kosta he was in breach of his visa conditions, took him into custody and ordered he return to Greece.

The only ticket he could find was with Royal Air Maroc (RAM), Morocco’s national carrier. It was going to Athens via the USA and Casablanca. I took him to the airport. I told him I would do everything to get his visa reinstated.

“I promise I’ll find every document the Department of Home Affairs needs to reinstate your visa,” I told him.
“I’ll send the originals express post.”

But, I feared I would never find enough supporting documents to complete Kosta’s new visa application. I worried my satchel wouldn’t leave Australia Post’s Melbourne distribution facility before December; I wondered if the documents would arrive in Serres before Greece’s tercentenary.

As the door at Gate 19 was closing on Kosta’s face, he looked into my eyes.
“Whatever happens, Doroula,” he said. “We will always have Oakleigh.”

What Kosta and I also have is an unfinished tapestry depicting Greece’s Independence War heroes.

Day and night I embroider, trying to finish the work. It’s an epic seven-panel installation with a middle scene of Nikolakis Mitropoulos raising the flag of the revolution at Salona (Amfissa), on Easter 1821.

To the left are images of the revolutionary leader Giorgios “Papaflessas” Flessas, war hero Giorgios Karaiskakis and fighter and philhellene Lord Byron.

Once completed, Kosta and I hope it will sit opposite the Great Hall Tapestry bush scene, in Parliament House, Canberra.

Just as the Great Hall Tapestry depicts Halley’s Comet that appeared in the sky at the time the tapestry was created in the mid-1980s, we have incorporated a giant coronavirus virion image into the Greek war scenes to reflect the worldwide pandemic.

But with Kosta still in Greece, I need help to finish the tapestry in time for the bicentenary of Greek independence, on 25 March.

Just as the Great Hall Tapestry was a collaboration between some of the finest creative Australian minds, including painter Arthur Boyd, I’m asking the Greek- Australian community to join me.

Greek grandmothers, artists, architects and craftspeople from a Greek-speaking background as well as philhellenes who want to help finish the tapestry should contact feedback@neoskosmos.com.au.

*Names have been changed to protect identity and to not prejudice potential immigration cases.