Century-old mystery unravelled: Looking beneath the defaced foundation stone of the Holy Church of Evangelismos of Melbourne 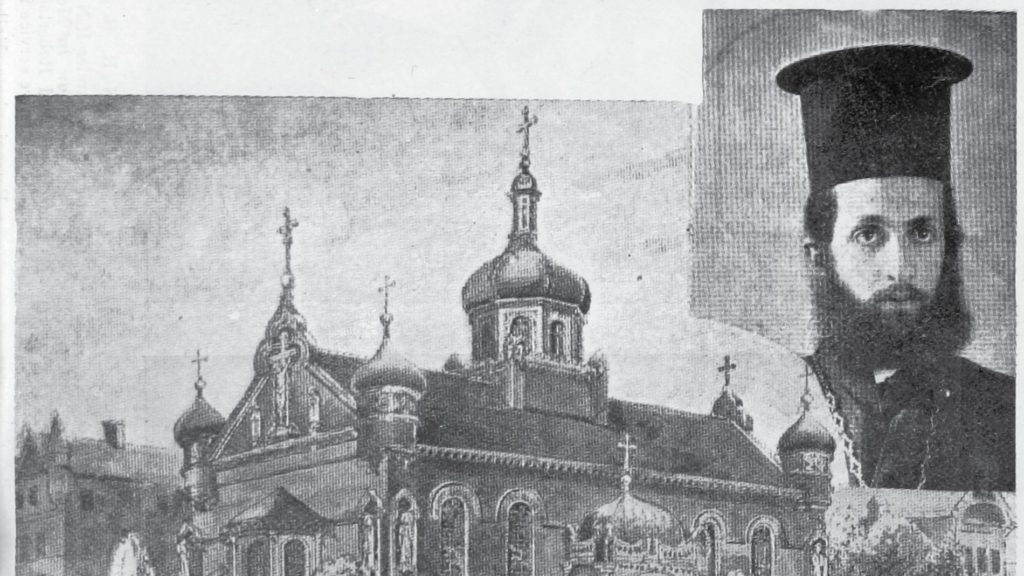 The Church as it appeared in newspapers-1900 (architectural sketch). Insert: Image of Kantopoulos

For many Greek Australians the Greek Orthodox church of The Holy Annunciation of Our Lady – commonly known as “Evangelismos” is an iconic symbol of our Greek community in Melbourne. Occupying a small parcel of land on the corner of Lansdowne Street and Victoria Parade, East Melbourne, it was described by Alexander Vangeli Maniachi, the first President of the Greek Community of Melbourne, as the “Free corner of Hellenism” (Ελεύθερη γωνία του Ελληνισμού).

Thousands of residents of Melbourne, irrespective of their race or religious affiliation, know it [Evangelismos] as the “Greek church on the corner…”

A robust red brick construction, with an almost medieval architectural flare, that dominates a busy corner of the Melbourne city fringe. Its footprint seems insignificant in comparison to churches of other denominations that dominated the Melbourne skyline at the commencement of the 20th century. Despite its so-called lack of aesthetic beauty, the church’s simple elements of design and its prevalent sense of intimacy provides a perception of connectivity in this humble and a sacred space. For a large portion Greek population of Melbourne, it is certainly deemed as a religious and cultural landmark.

Heritage Victoria, on its website, identifies the “Evangelismos” church as a site of significant cultural heritage highlighting its “architectural significance for its association with the architects Inskip and Butler…..especially well known for their ecclesiastical work and Butler was renowned for his use of Medieval and Picturesque forms and was associated with William Morris”.

Furthermore, Victoria’s Heritage Council clearly acknowledges that “The Church of the Holy Annunciation [Evangelismos] is of historical significance as the first purpose-built Greek Orthodox Church in Victoria and for its long and continuous association with the Greek community in Melbourne”.

What is also distinctively noticeable about “Evangelismos” church, is its foundation stone-located on the North side exterior facade-and the fact that most of its inscription has been purposely defaced. Nearly all the words on the foundation stone were deliberately concreted hence making the majority of its inscription illegible. Hopefully, the century-old mystery will be resolved within this narrative.

All the initially architectural sketches and plans provide us with the impression that the proposed church building would adapt a medieval Russian architectural style with a larger footprint however this was not the case. The estimated cost, according to many newspaper reports was approximately £3,500, but by all indications the Orthodox constituents of Melbourne failed to collect the required sum and many compromises to the proposed plans were made. Hence from an imposing church with a medieval Russian motif the outcome resulted in an incomplete structure without a magnanimous central dome and with incomplete bulbous structures which feature on each corner of the church’s rooftop. The church initially was a small rectangular shaped structure that occupied only two thirds of the current size of “Evangelismos”. A white picket fence surrounded the perimeter of the church, creating a quaint and picturesque landscape that was admired by many. Up until 1935 it was considerably smaller in size, without a mezzanine level (matroneum), and the main entrance was located on the west side of the church.

Despite its architectural relegation, which resulted in the downsizing of “Evangelismos”, the church in its own unique manner was able to retain a significant status within the religious circles of that era.

Laying the foundation stone, contents of a time capsule

The description of the laying of the Evangelismos’ foundation stone was reported in nearly every newspaper of the then Colony of Victoria. Each newspaper reporter offered their own description of the ceremony however all of them underlined the elements of peculiarity associated with ceremony as well as the deep richness and reverence of the liturgy.
According to a number of newspaper reports the date of the ceremony was deliberately chosen by the church committee: “The ceremony of laying the foundation stone was specially arranged for Wednesday, 19 December, as that date is the ‘Saint’s Day’ of Czar Nicholas II, who is the supreme head of the Greek Church” “Table Talk” – 27 December, 1900. (St Nicholas Day – Julian calendar: 6 December, 1900)

In the same article the author reiterated the significance of the event for the city of Melbourne by noting that: “The cosmopolitan character of the residents of Australian Cities has often been shown, and it is in their worship that the various nations represented in our midst receives the most definite demonstration.”

all indications the ceremony to mark the laying of the foundation stone was an impressive event with all the associated pomp. Dignitaries from all nations, church leaders and Government officials added to the prominence of the ceremony.

The Age newspaper accurately observes in its column dated 20 December, 1900 that “The presence of the heads of other churches proclaimed that in this country ‘freedom of conscience’ and ‘tolerance’ were not merely idle terms.”

A clear reference to the multifaith nature of the ceremony at which all religious denominations were represented, fostering not only a mutual religious understanding but also an appreciation of tolerance in a religiously plural Australia.

Apart from the splendour of the liturgy, what is repeatedly highlighted throughout all the articles was the placement and contents of what could be term as a “time capsule” that still remains to date below the foundation stone. As for the contents of the “time capsule” we can surmise with a degree of certainty, from all the newspaper references, that the following items were placed in the capsule.

Contents of capsule that lies beneath the foundation stone:
* The 77 names of the original contributors to the cost of the church – (written on a scroll)
* Gold & Silver coins: Russian, English & Greek coins– (Celebrating the symbiosis of three nations: The Russian Empire, the Modern Greek State & the British Empire)
* Several Gold nuggets – (symbolic of the city of Melbourne; a city that prospered and flourished with the discovery of gold)
* Several pebbles from the grave of Christ and from Golgotha, as well as a small vial of oil from the Mount of Olives – (Representing the church of the Holy Sepulchre and the Patriarchate of Jerusalem)

These items were placed in a glass capsule by Fr Kantopoulos which was carefully placed in a purpose built cavity that was sealed, dated, and positioned below the foundation stone in strict accordance with the rites of the Christian Orthodox faith.

“Having sprinkled the bottle with holy water, taken from the River Jordan, using for the purpose a small sprig of palm, Father Kantopoulos placed the vessel [capsule] in a cavity underneath the receptacle prepared for the stone. The hole was covered with a brass plate, bearing an inscription, giving the date of the ceremony. Lastly, the stone was lowered into position and sprinkled with holy water by the priest, who declared it properly laid.” The Age – 20 December, 1900.

Above the cavity, a cross was positioned which bore the inscription of the church’s Patriarchal jurisdiction “His Beatitude the Patriarch of Jerusalem and the whole of Palestine, Damianos the First, to be officiated by his appointed priest.”

A period of intense conflict

Following the foundation ceremony and with the completion of the construction (June 1901), the course of the new Greek church “Evangelismos” and of Christian Orthodoxy in Victoria entered a period of intense conflict amongst opposing sides resulting in the vilification of the church’s priest that became a habitual exercise by the church’s governing committee.

Up until the 1920s, court cases and multiple clerical dismissals were a common occurrence creating a clear dichotomy between the parishioners. Years later, a frustrated editor (Efstratios Venlis) of the then Greek-Australian newspaper “Afstralia-Australia” expressed his concerns for the repetitive horrendous treatment and persecution of those priests who were appointed to the church of “Evangelismos”, referring to their unwarranted and forced dismissal.

The most bitter of conflicts that blemished the early history of “Evangelismos” was the church committee’s treatment of the first duly appointed Christian Orthodox priest to Australia Fr Athanasios Kantopoulos. This conflict lasted for nearly six years, with Kantopoulos being marginalised and penalised for not conforming to the directives of the church committee. The parishioners on many occasions were the centre of unprecedented conflict, personal antagonism and disruptive confrontation. Within this conflict reigned also the geopolitical and religious ambiguity that prevailed during the late 1800’s and early 1900’s within the circles of the Anglican and Christian Orthodox church hierarchy.

The so-called official church committee, with Alexander Maniachi as the protagonist, failed to stop Kantopoulos and his parishioners despite ensuing court appearances and protests towards the Orthodox church leadership.

As such, Fr Kantopoulos continued his mission by reviving the “old church” located at Parliament Place, East Melbourne (nee Grey St. West) and his flock outnumbering those who attended “Evangelismos”; a move which certainly unsettled a number of leading foundation members of the church. Those who followed Kantopoulos consisted mainly of Greeks born outside the narrow borders of the then territory of Greece as well as those Orthodox Christians of middle eastern decent. Sadly, a narrow perception of nationalism and elitism prevailed amongst the leadership of the Greek community, who for many years classified the Orthodox faithful of the Middle East as nomads and intentionally ostracised these Christian groups.

The church committee’s minutes, dated 22 September 1903, clearly articulates the committee’s decision to remove Kantopoulos’ name from the foundation stone that was laid a few years prior. This was a deliberate attempt to eliminate any form of association between “Evangelismos” and its first priest, Fr Kantopoulos. Subsequently Kantopoulos’ name was hastily removed in act of unprecedented vandalism that resulted in an abrupt end to his association with “Evangelismos” and its committee of management.
Resolving historical errors

After 118 years, the “Evangelismos” foundation stone still remains defaced, eradicating one the most significant historical moments that commemorates our presence in Melbourne and Victoria.

Restoring the foundation stone to its original state would be a major step in rectifying our historical errors. Such divisive historical memories and ongoing conflicts have only burdened our community resulting in a lack of vision within a multicultural framework.

In fact, a memorial service in honour of Fr Athanasios Kantopoulos is a gesture that should be encouraged; by extending an invitation to the Russian, Lebanese and Syrian ecclesiastic, diplomatic and community leadership to attend an event in honour of Fr Athanasios Kantopoulos. Such a move would gain momentum throughout the community, religious and diplomatic circles of Melbourne and would be a symbolic step in moving forward as well as an act of historical reconciliation.

As for the Foundation stone’s inscription, the following lines have been deciphered and read as follows (translated from Greek to English):

As we enter the core celebrations of the 200-year anniversary of the liberation of Greece, it is certainly the right time to correct our mistakes of the past and restore the inscription of the church’s foundation stone. Described as an iconic symbol of Hellenism in Melbourne, “Evangelismos” church, in this instance, deserves also to be liberated from its factional and chauvinistic history.