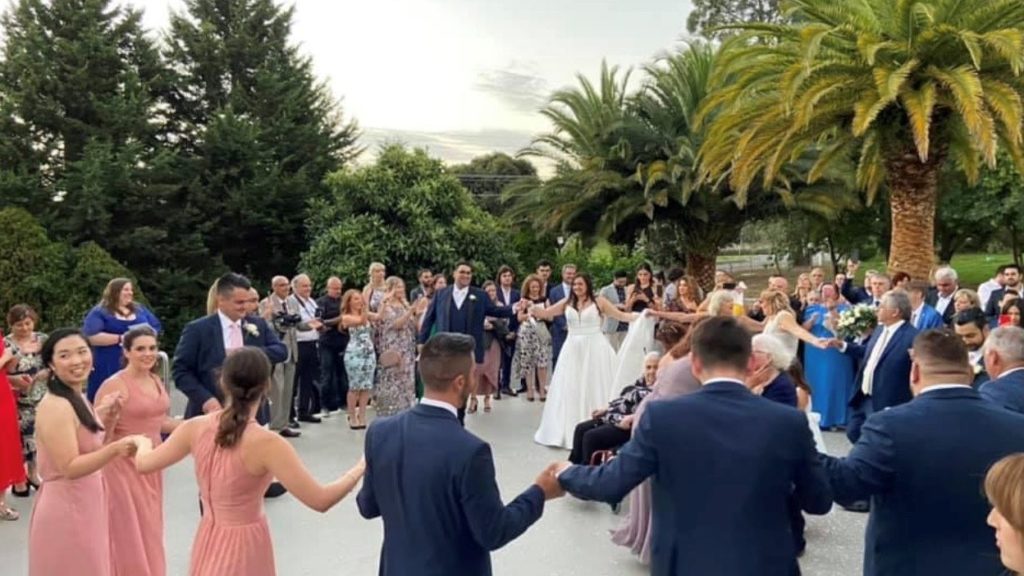 One tradition that Nikolas and Anthea Georgiou were able to retain for their snap wedding celebrations was the dance of the bride in the churchyard. Photo Supplied

In these times COVID-19 has played havoc with the best-laid plans and when Victoria went into a snap lockdown earlier this month everything was up in the air again.

That included Nicholas Georgiou and fiancée Anthea’s plans to tie the knot on St Valentine’s Day on 14 February. They had already postponed their wedding last October because of the pandemic and it looked like it was going to happen again when on Friday, 12 February, Victorian Premier Daniel Andrews announced a snap five-day lockdown starting at midnight.

“We had already cancelled the marriage once, the same could not happen again”, the groom, Nikolas Georgiou, told Neos Kosmos.

So, he asked his betrothed, Anthea: “Do you want to get married tonight?”.

She might have been taken aback at the suddenness of it all but she said yes.

He got the green light for the service to take place at Agios Charalambos at 7pm.

From that point on the couple had three hours to blitz social media and organise families, friends, bridesmaids and photographer to be there and for the post wedding glendi before the lockdown midnight hour.

In the end , the best man who had been working two hours from Melbourne made it on time as did the 130 guests.

“The groom dressed without the accompaniment of violins as we planned, but we managed to revive the custom of the bride dancing in the churchyard and it was really like being in a village in Greece,” Mr Georgiou said.

The table was not set at the venue but at a restaurant near the church and the honeymoon in Queensland was replaced by a three-day stay within Victoria.

“It’s important that the wedding took place. We can do everything else even a little later “, said Mr Georgiou.