Byzantine ecclesiastical music, where tradition is a way of life 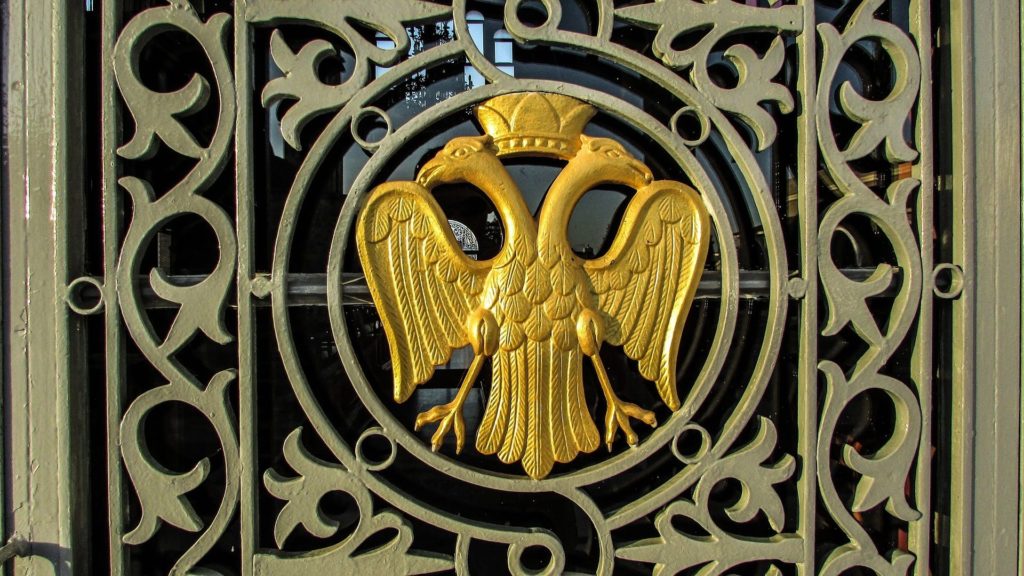 Two-headed eagle, a symbol of the Byzantium. Photo: Pixabay

As far as I can remember, Byzantine music has been part of my life.

One of my earliest memories is of waking up to the smell of incense and listening to my grandmother chanting troparia as she censed the house. There was something mysterious about those sounds, the arcane words hinting at truths that needed to be unlocked, the lilting and eliding cadences, primordial and eternal, wrapping themselves around my ears like a protective comforting cocoon. This was more than the music of Heaven. It was the melodic narrative of the historical progression of an entire people.

I was fifteen when I first encountered Byzantine notation. Visiting a monastery outside Chania, in Crete, I noticed some ancient tomes, displayed open in a glass cabinet. Strange inscriptions in a language I could not decipher ran across the pages.

“Is that Arabic?” I asked the smiling monk watching me, as he offered me a loukoumi.

“What? No, this is Byzantine musical notation,” the monk laughed and tracing his fingers over the squiggles under the glass, like a magic wand, he brought them to life, intoning the Psalm with such passion that I felt its impact in the pit of my stomach: “Lord, I have cried unto Thee, hearken unto me; attend to the voice of my supplication when I cry unto Thee. Let my prayer be set forth as incense before Thee, the lifting up of my hands as an evening sacrifice.”

From that point on, Byzantine music ceased being the antiphon to my consciousness and became a visceral presence in my life. In the kontakia sung in church I discovered metrical homilies of intense beauty and sophistication traces of which I was able to identify in Greek literature up until the work of Odysseas Elytis and melismatic elements that informed the demotic and rebetika genres of Greek music as well as that of Mikis Theodorakis. As a student of classical music, I also soon began to realise that the western system of notation I had learned could not really express the subtleties of my own ancestral music tradition.

That is why Byzantine musical notation is so important. Whereas in western musical theory, each note is recorded on the stave as having its own stand-alone independent pitch, the Byzantine musical notation system encodes a completely different way of understanding tonality. Accordingly, in the nuanced Byzantine tradition, the fixed position of each note can only be comprehended in relation to the note that precedes it and the key in which the piece it is in, with the gradations between notes understood according to a conception of music that goes back as far as Pythagoras. This relativist conception of recording pitch accords also with a Byzantine collegiate conception of theology where all beings exist as separate entities but in relation to each other.

To ignore Byzantine musical notation, whose beautiful script flows along the page with the sinuousness and sensuality of a river, as arcane, difficult to comprehend and superseded is thus tantamount to insisting that the Greek language be recorded with Roman letters. A musical tradition must be preserved studied and developed using the media through which it has evolved. That is not to say that it is a stagnant tradition. The seminal research undertaken by scholars such as the Turkish academic Merih Erol highlights the long and organic progression of Byzantine music notation, including significant reforms and simplification in the nineteenth century. In particular, Merih Erol has cast a spotlight onto the ontopathology of Constantinopolitan Greeks who in the late nineteenth century debated whether they should switch to Western notation as a sign of progress and gentrification. Fortunately they saw the sense in embracing the new music while simultaneously retaining their old traditions.

It is exactly for this reason that the publication of Associate Lecturer in Worship and Liturgy, and Instructor in Byzantine Ecclesiastical Music at St Andrew Greek Theological College Basilios Psilacos’ Handbook: “Byzantine Ecclesiastical Music: Chanting in the Eastern Orthodox Tradition” is so timely and pertinent. As the author states in his introduction: “Tradition is a way of life, bringing people together not only in place, but also in time.” 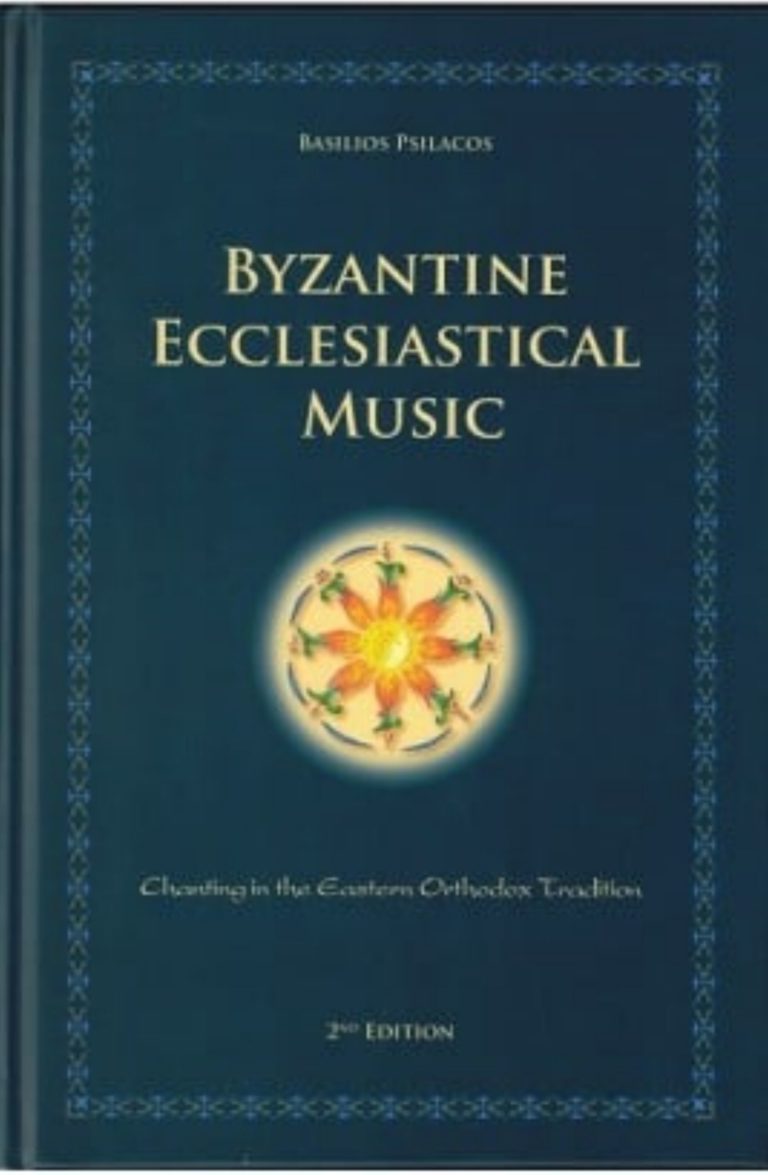 This gives us pause for thought. After over one hundred and fifty years of a presence in this continent so far from our place of origin, at a time where increasingly our identity discourse is expressed in English, what possible relevance can a venerable musical lineage such as that of the Byzantines have to do with us? Basilios Psilacos in his painstakingly compiled Handbook, provides the answer: All of us, express our “unique mode of being.” By exploring a “centuries old tradition with many developmental phases,” we are empowered to explore our own particular trajectory, communing not only with our ancestors and delighting in their perspective (as the author points out, according to the Greek view, music is gendered, with rhythm being considered male and melody female) but most importantly, to position ourselves for our involvement in this musical tradition’s further development, within the framework of the society in which we live.

The historical significance of the second edition of the Handbook should not escape us. It is the first textbook of Byzantine music ever to be published in Australia in the English language. In five simple chapters, Basilios Psilacos concisely sets out the key components of musical theory that will permit the novice but also those possessed of some knowledge of the art, to further delve into the “greater mystery, when many express themselves in unison.” In this way, through the thematic progression of Notation, Keys, Rhythm, Liturgics and Voice Development study, and via the provision of easily digestible lessons and practical exercises, the author positions the student so as not only to partake of the tradition within its customary liturgical setting, but also to play an intrinsic part in its retention, evolution and contextualization within the Australian discourse. The author’s endeavour in this regard is buttressed by his provision of a chapter on the transposition of Byzantine Music for Western notation, expertly suggesting that the two traditions, while distinct are not mutually exclusive and providing a conduit for dialogue between them. This is the quintessence of multiculturalism.

An extensive glossary at the back of the book provides a ready reference for the multitude of terms that form part of the tradition. Some of these are quite fascinating and reveal just how distinct the Byzantine perspective of music and its ancillary study actually is. Take the entry on Psofos (ψόφος) which the author defines as follows: “literally meaning death. In our context would be the impact of our hand (like a dead body), when keeping rhythm, indicating the beginning of a beat.” The deadbeat, as it transpires, is a Byzantine invention.
Throughout the lessons comprising the Handbook, the author stresses the collegial nature of the practice of Byzantine music and the interpersonal dimension of skill acquisition, urging those who would learn the art to avail themselves of a teacher. In these days, where schools of Byzantine Music have been set up in the major Australian Metropolises with impressive enrolment numbers, such teachers are readily available and indeed for these, the Handbook already forms a prescribed text. For those unable to attend, a series of online audiovisual resources are currently being developed as a companion to the Handbook.

Byzantine ecclesiastical music forms a precious part of the foundation of the musical traditions of the Balkans, the Near East and Russia, even if each of these regions have developed their own native systems of notation and theory over time. By distilling centuries of the venerable corpus of Byzantine music and presenting it to us in a digestible and relevant form, Basilios Psilacos’ invaluable Handbook not only provides a sound platform from which to explore and appreciate ancillary musical heritages but also constitutes a considered basis for the preservation and assimilation of a mode of expression that echoes deeply in the hearts of hundreds of thousands of Australian citizens. Forming an essential and indispensable part of any Greek-Australian library, it triumphantly prepares the reader, paraphrasing the first ode of the Canon of the Akathist, to “open [their] mouth and be filled with the Spirit, pour[ing] forth words…and be seen in joyous jubilation, acclaiming exultantly.”

A veritable “vessel of rejoicing,” Byzantine Ecclesiastical Music by Basilios Psilacos is available at the Greek Orthodox Archdiocese’ Bookshop, online at: https://www.greekorthodoxbookshop.com.au