The Greek Mata Hari and the revolution 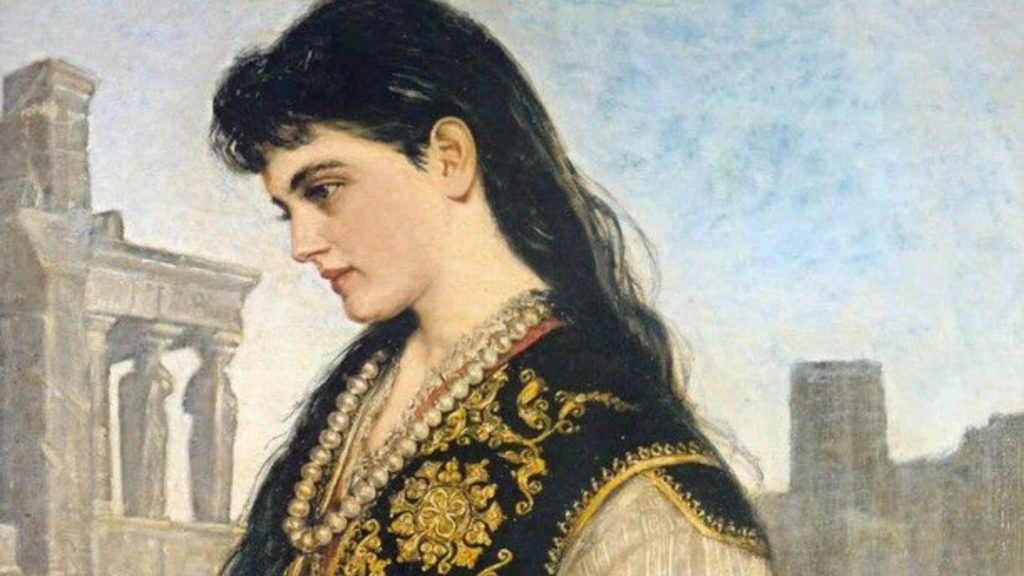 In her book, “Women of ‘21,” Greek historian and feminist Koula Xiradaki observes that the historiography of the 1821 Revolution has become “like the monasteries of Mount Athos: a place where no women enter.” Although efforts have been made in recent years to include women within the narrative of the War of Independence, they are still largely assigned a role secondary to the male luminaries who tend to be the subject of hagiography, rather than historiography within the broader Greek discourse. Most significantly, it is largely males who have determined the manner in which such Greek women participants in the revolutionary struggle are portrayed. Their role is stereotyped as either passive, restricted to the contribution of funds, or in such cases as those of the war-like women of Souli, ancillary to the martial activities of their menfolk, with the emphasis given to women of powerful families and notable lineage, ordinary women scarcely receiving a mention. Consequently the women’s own voices are silenced, access to their own perspective is circumscribed, their significance is portrayed as secondary in importance to men and even their memoirs are seldom quoted or subjected to critical analysis.

As a result, we are generally denied knowledge some of the more fascinating clandestine activities of particularly resourceful ladies skilled in the art of subterfuge. The remarkable story of one of these, Marigo Zafaropoula, exists only through the attestations and testimonials of such revolutionary heroes as Nikitaras, P Mavromihalis and Chatzichristos Voulgaris, as contained in the “Archive of Revolutionaries” in the Greek National Library. What emerges from these sources however, is of a multi-faceted woman of breathtaking subtlety and blind commitment to the cause of Greece’s liberation. Without her intervention, not a few heroes of the Greek Revolution would have not survived in order to claim that hallowed title: put simply, they owe their life to her.

A Constantinopolitan from a well-to-do family, Zafaropoula lived in Tatavla, a quarter originally built in the sixteenth century as a residential area for Chian Greeks, settled there to work in the principal dockyards of the Ottoman Empire which were situated in the neighbouring Kasımpaşa quarter. It was possibly her family’s economic standing that facilitated her swearing in as a member of the overwhelmingly male Filiki Etaireia, the Secret Society whose aim it was to overthrow Ottoman rule and establish a Greek state.

READ MORE: Events galore: Your guide to the 200-year celebration of Greece’s War of Independence

A socialite with a particular penchant for obtaining hard to come by information, Zafaropoula’s skills were soon desperately sought after. In February 1821, while leading members of the Philiki Etaireia, Papaflessas, Perrhaivos, Lemonis and Chrysospathis were in Constantinople, preparing for the revolt in the Peloponnese, a Phanariote Greek member of the Etaireia, one Asimakis Theodorou, betrayed the existence of that organisation and its plans to the Ottoman authorities. According to a written testimonies signed by some of the greatest revolutionary heroes of the age, not only was Zafaropoula quick to learn of the betrayal through her clandestine network of informers, she also went “door to door to learn what fate was being planned for the fighters and if developments were able to be anticipated and their fate averted….this is owed in large part to her vigilance and patriotic zeal.” It is considered that Zafaropoula was also possibly behind the initiation of a whisper campaign that saw the perfidious Asimakis discredited as an agent of Ali Pasha of Ioannina and a disseminator of false information. He was jailed by the Ottomans for his trouble.

The leading Etairists were able in the confusion to make their escape. Zafaropoula stayed behind in Constantinople, secretly collecting money from wealthy families, in order to aid the revolutionaries. Expertly employing her extensive connections, she was able to effect via elaborate means and many bribes, the escape of the sons of Maniot grandee and revolutionary Petrobeis Mavromihalis, who were being held in Constantinople as hostages by the Ottomans, to safety in the Danubian Principalities.

It was this brazen act of daring that led to her betrayal as an agent of the Etairists. Her brother was arrested and executed by the Ottomans on 23 April 1821. Despite being pursued by the authorities, Zafaropoula was able to elude the Ottomans, managing to escape to Hydra, a centre of revolutionary activity. Ever resourceful, she brought with her, a large sum of family money which she placed at the disposal of the Revolution.

The leaders of the Revolution were quick to perceive Zafaropoula’s worth as a gatherer of intelligence. Theodoros Kolokotronis and Dimitrios Ypsilantis both sent her on clandestine espionage missions to the towns of Tripolitsa and Nauplion, where, her innate ability to infiltrate the echelons of power, no easy task for a ‘respectiable’ woman in late Ottoman society, and her aptitude for extracting information from those in key positions, assisted in the formulation of the Greek revolutionaries’ strategy for their capture. Later, when the fortunes of the Revolution turned sour owing to factional infighting and the invasion of the Peloponnese by Ibrahim Pasha of Egypt, Zafaropoula, at great risk to her own personal safety, was deployed to the areas where Greek prisoners and slaves were being held, tasked with giving and receiving vital messages.

Such was the fervour of Zafaropoula’s dedication to the Greek Revolution that she also privately financed French philhellene Charles Nicolas Fabvier’s mission against the almost impregnable fort of Karystos in Euboea in 1825, going so far as to load a ship with provisions for his men at Spetses and sailing it herself to the island. After the failure of that endeavour, in 1828, she also financed Epirot freedom fighter Chatzimihalis Dalianis’ expedition to revive the revolution in Crete, meeting the cost of an army of six hundred infantry and one hundred cavalry. That campaign too met with disaster, resulting in Dalianis’ death.

While bankrolling the Revolution and providing valuable intelligence, the adept Zafaropoula also found time to have a personal life, marrying a fighter variously named Giorgos or Theodoros Stefanou and having two children with him, before he was killed in battle.

Ageing, having lost her husband, donated all of her fortune to the Revolution and effectively socially sidelined, by 1865, Zafaropoula was completely destitute. By all accounts she was not embittered so much by the economic loss caused by her contribution to the cause of Greek Independence, but rather by the young Greek State’s indifference and lack of recognition of her efforts. Nonetheless, it is this ingratitude that served as the catalyst for the preservation of her astonishing story.

Bereft of any State assistance and seeking in her anguish to alleviate her parlous personal circumstances, Zafaropoula turned to those of her erstwhile revolutionary comrades that were still alive, or the children of those who had passed away for assistance. Together, they drafted a lengthy testimonial detailing all of her activities in the cause of Greek Freedom, signed among others, by Gennaios Kolokotronis, the son of the legendary Old Man of Morea Theodoros Kolokotronis. The document, dated 19 April 1965 is executed on behalf of Marigo Zarafopoula by the Solutiote Christos Tzavelas, because for all of her considerable abilities in reconnaissance and infiltration, she remained to the end of her life, illiterate.

Part testimonial, part petition, the document ends with a plaintive plea for the grant of a state pension to Zafaropoula, it being pointed out that a lot of people who had contributed much less than she, were enjoying a government stipend, while she who had given all, now had nothing.

Sadly, Zafaropoula died in the same year, isolated, unmourned and soon forgotten, her marvellous role in securing the safety of the protagonists of the Revolution and the Freedom of Greece, relegated to the archives, safely out of the way of the popular discourse. Her ultimate fate must necessarily be compared with that of both Manto Mavrogenous and Laskarina Bouboulina, both of whom also expended their considerable fortunes in furtherance of the pursuit of Greek Independence, only to be reviled in their subsequent destitution – a cautionary feminist tale about contributing to the patriarchy’s state building, if there ever was one.

In this, the bicentenary of the outbreak of the Greek Revolution, it is hoped that the largely untold stories of heroines such as the unappreciated Mata Hari of the Greek Revolution Marigo Zafaropoula will emerge from the shadows, be afforded due honour and their rightful place within the Greek historical narrative and contribute to a re-evaluation of Greek women’s role in this most crucial of historical turning points. The juxtaposition and comparison of such fierce freedom-fighting heroines with those bravely spearheading the current Greek #metoo movement is timely and valuable indeed.