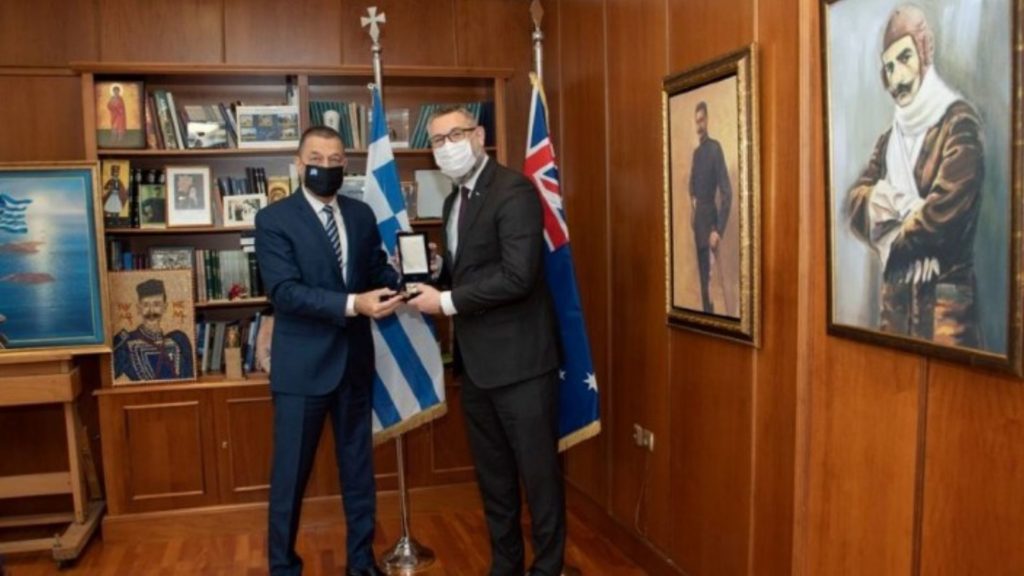 The Australian Government’s proposal to build important new ANZAC commemorative infrastructure on Lemnos is being progressed in recent high-level discussions between Greek and Australian.

Greek Deputy Minister of Defence Alkiviadis Stefanis and Australian Minister for Veterans and Defence Personnel Darren Chester MP had an online meeting last month. The Ambassador of Australia to Greece Arthur Spyrou was also present during the meeting.

During the meeting, Mr Chester presented a new proposal by the Australian Department of Veterans’ Affairs for the construction of new infrastructure on Lemnos, to enhance the commemorative experience of visitors, a further demonstration of the increasing recognition the contribution of the Australian and New Zealand Army Corps (ANZAC) in the Gallipoli campaign.

Neos Kosmos reported last year on the development of this proposal. The proposal flows from the recommendations of the Lemnos Scoping Study completed last year.

Historian Jim Claven – author of the book Lemnos & Gallipoli Revealed and Secretary of the Lemnos Gallipoli Commemorative Committee – was engaged as historical consultant to the study. This study reviewed the various options for enhancing Lemnos’ commemorative experience, drawing on the island’s extensive involvement with the Gallipoli campaign, recommending a series of options to the Australian Government. The Australian Government is now in discussion with the Greek Government to realise the project.

Interviewed by Neos Kosmos, Mr Claven said that this is an important development in the recognition of the role of Greece in Australia’s Anzac story.

“Lemnos has many locations connected to the Anzac story, from Mudros Bay to its War Cemeteries and beyond. The realisation of this project will draw new commemorative visitors to the island through new infrastructure which will make visitation easier and elevate the whole commemorative experience. This is a great day for Greece and Australia,” he said.