Women played important roles in the struggle for Greek independence from Ottoman rule. Whether it was at the head of forces and equipment that they paid for with their own money or to finance the fighting. Women were also key players in promoting the Greek cause to a Europe reluctant to become embroiled in a major war after the Napoleonic Wars that had ended in 1815. Greek women fought or supported the fighters of the Revolution. 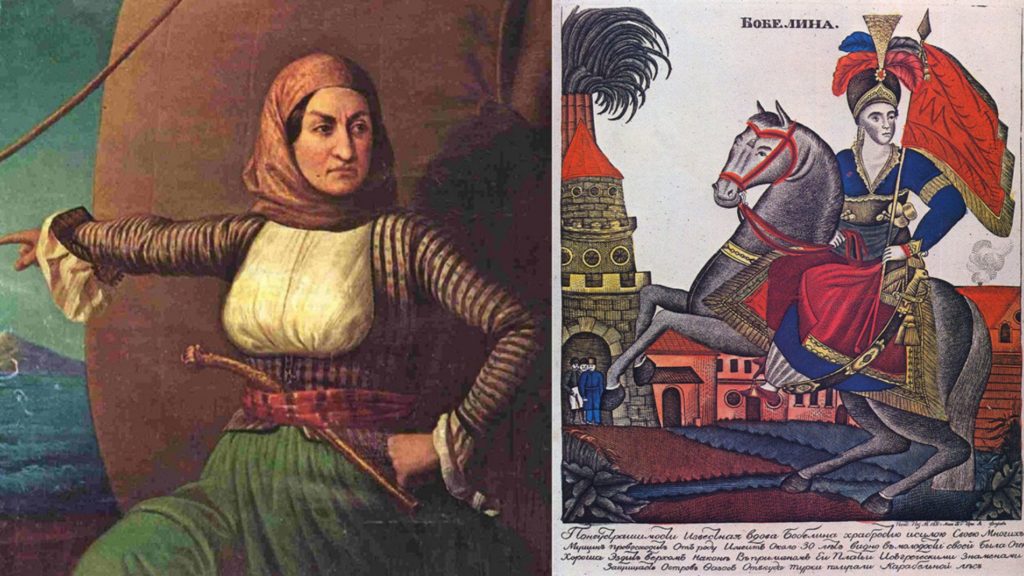 Composite image of Laskarina Bouboulina, left, from an anonymous 19th Century portrait housed at the National Museum of History in Athens, and, right, a Russian engraving entitled “Bobelina” which is housed at the Museum Bouboulina. The Russian tsar Alexander I awarded her the title of “Admiral”. The first woman in history to receive such a title. Photos: WikiCommons

Laskarina Bouboulina
The legend of Kapetanissa (Captain) Laskarina Bouboulina is unique. A fierce fighter for the Greek cause, she charted her own course through war against the Turks and in the civil wars between the Greeks. She devoted herself, her ships and fortune to the fight for independence only to be killed in a family dispute in 1825.

She is also the first woman in history to be awarded the title of admiral when the Russian Tsar Alexander I granted her that rank after her death .It would be no understatement that Bouboulina was almost genetically disposed to be defiant against Ottoman rule. She was born in a Constantinople prison. Her father Stavrianos Pinotsis was a captain from Hydra Island who had taken part in the failed Orlof Revolt (1769-1770) in Greece. Her pregnant mother, Skevo, was visiting him in prison on 11 May, 1781, when she gave birth to Bouboulina.

Bouboulina’s father was to die in prison soon after her birth and her mother returned to Hydra with the new-born child.

The Kapetanissa was to marry twice. First to Dimitrios Yannouzas and then to Dimitrios Bouboulis, a wealthy shipowner and captain.

She was 40 years old when her husband was killed in battle with Algerian pirates in1816. She took over her late husband’s business ventures. The Ottoman government sought to confiscate Bouboulina’s property because her husband had fought for the Russians in the earlier Russo-Turkish War of1806-1812.

Bouboulina sought Russian protection and for three months lived in the Crimea until the sultan, Mahmud II, relented.

When she returned to Spetses, Bouboulina set about secretly stockpiling weapons and ammunition and building more ships. She was to build four, including the Agamemnon that was to be one of the largest warships placed at the disposal of Greek forces when the revolt broke out in 1821.

She paid, fed and armed the men in her service from her own resources. On 13 March 1821 Bouboulina raised her own version of the Greek flag on the mast of Agamemnon – it was based on the flag of the Byzantine Komnenos dynasty.

READ MORE: On this day in history: The adoption of the Greek flag

When Spetses joined the revolt on 3 April, Bouboulina joined forces with the fleets from other Greek islands.

Her eight ships took part in the naval blockade of Nafplion. She was also part of the force that blockaded and captured Monemvasia and Pylos. The following month, in May, he son, Yiannis Yannouzas died at the battle for Argos.

In September, at the siege of Tripoli, she met General Theodoros Kolokotronis for the first time. Their friendship was to be strengthened when her daughter, Eleni, later married Panos Kolokotronis, the general’s son.

Bouboulina is credited with saving the lives of the women in the local sultan’s household when Tripoli fell to the Greeks on 11 September.

Her association with the Kolokotronis name was to become a source of trouble for her when civil war erupted in 1824 and the Greek government had her arrested. Her son-in-law, Panos, was to die in that civil war.

Bouboulina was eventually released and exiled to Spetses. When her son, Giorgios Yannouzas, eloped with Christodoulos Koutsis’ daughter, trouble followed. The girl’s father went to confront Bouboulina with armed men.

Her flagship, the Agamemnon, was sold to the Greek state which renamed as the “Spetsai”. Anrdreas Miaoulis was to burn it in the subsequent civil war of 1831.

Manto Mavrogenous
Where Bouboulina’s contribution was at the head of her own fleet, the aristocratic Manto Mavrogenous not only financed ships that fought in the revolution, she also paid to equip men to fight the Ottoman forces in the Peloponnese.

She gave money to support the soldiers and their families and promoted the Greek cause through letters to key contacts in the salons of Europe.

Mavrogenous was born in 1796, in Trieste, then part of the Habsburg Empire, the daughter of Nikolaos Mavrogenous and Zacharati Chatzi Bati. Nikolaos was a Mykonos merchant who was a member of the Filiki Eteria, the Greek secret society founded in 1814 in Odessa that was dedicated to the liberation of Greece from Ottoman rule.

A child of the Age of Enlightenment, Mavrogenous studied Greek philosophy and history at a college in Trieste.

The family moved to the island of Paros in 1806. She learned from her father that the Filiki Eteria was laying the groundwork for the Greek Revolution. After his death, Mavrogenous moved to Tinos in 1818. When the revolution broke out in March 1821, she moved to Mykonos and called on the leaders on the island to join the struggle.

She paid for and manned two ships to fight pirates who were threatening Mykonos and other islands in the Cyclades. She was at the head of forces that repulsed Ottoman Turks who had landed on the island on 22 October.

While paying and equipping a force of 150 men to join the fighting the Peloponnese, Mavrogenous also sent forces and gave financial support to Samos when that island was threatened by Ottoman forces.

She sent fleet of six ships and an infantry detachment of 800 men to the siege of Karystos in Euboa in 1822.

While she paid for a campaign in Chios she was not able to prevent the massacre that took place there on 12 April, 1822.

She financed a detachment of 50 men that fought at the Battle of Dervenakia – a battle that Theodoros Kolokotranis won with a force of 2,300 Greeks pitted against a 30,000-strong Turkish army under the command of Dramali Mahmud Pasha.

Mavrogenous then sold her jewellery to equip 200 men to fight a Turkish fleet that threatened the Cyclades islands.

She also was part of a campaign to win the hearts and minds of influential people in Europe.

In a letter to the women of Paris, Mavrogenous wrote: “The Greeks, born to be liberal, will owe their independence only to themselves. So I don’t ask your intervention to force your compatriots to help us. But only to change the idea of sending help to our enemies. The war spreads the horrible death…”

Her sacrifices for the revolution won her little favour with her own family who felt that she was wasting her fortune. It was one of the reasons why she moved to Nafplio, the capital of the fledgling Greek state in 1823. Mavrogenous felt she would be best placed in Nafplio to influence key decisions.

When her betrothal to Demetrious Ypsilanti was announced, many feared that her ability to influence events would be too strong. She drew the enmity of powerful politicians suspicious of the pro-Russian affiliations of the power couple.

In May 1823, her home was destroyed in a fire and what was left of her fortune stolen. She went to Tripoli to live with Ypsilanti.

The then minister of the Internal Affairs and Chief of Police, Papaflessas and one of the leading lights of the revolution, provided food to Marvrogenous.

When Ypsilanti died, she was forced to return to Mykonos where she began writing her memoirs.

The government of Ioannis Kapodistrias granted her the rank of Lieutenant General and gave her a home in Nafplio.

Domna Visvizi
Another woman who gave her all to the Greek revolution was Domna Visvizi from Ainos in Eastern Thrace. Together with her husband, Hatzi-Antonis, she donated money and property to the cause. She continued these efforts after his death.

Asimina Goura
The wife of the commander of the Greek garrison in Athens, Asimina Goura, assumed command of the defence of the city when her husband was killed in the fighting against Turkish forces. She made the soldiers take an oath over an icon held over her husband’s body to continue fighting. She took up her late husband’s arms and patrolled the defences offering encouragement to the men.

Princess Rallou Karatza
Rallou was the daughter of the Phanariote Ioannis George Karatzas, the Prince of Wallachia (1812-1818). She convinced her father to set up a royal dramatic society and became an actress, theatre director and translator.

The princess joined the Filiki Eteria and used her influence to promote the cause of Greek independence.

She founded the first theatre in Bucharest with support of students of the Greek school in the Romanian capital. She translated and directed plays from Western Europe.

In 1829, she moved to Athens and married George Argyropoulos. Rallou died in Thornberg near Leipzig in 1870.

Stravrianna Savvaina
Stravrianna Savvaina was from the Mani was involved in a number of important battles. According to a newspaper, Efimerida ton Kyrion, she was placed under the orders of Kyriakoulis Mavromichalis and fought at Valtessi where she supplied the men defending the position and at great danger to herself gundpowder and bullets to the men.

“Those around Kolokotronis, Mavromichalis and Plapoutas had a hard time believing that a woman had such courage,” wrote Efimeritha ton Kyrion.