Young Alec Holland from Brunswick – a 23-year-old former apprentice at Melbourne’s Newport Railway Yards – was one of Australia’s soldiers who came to Lemnos during the Gallipoli campaign. He recorded his experiences in an incredible collection of personal diaries, photographs, drawings and memorabilia, which have been treasured by his family ever since. Recently Alec’s granddaughter, Ann, showed me Alec’s amazing images and writings. As I sat in her living room in suburban Melbourne another link between Lemnos and Australia began to unfold before my eyes. This is the story of Alec Holland’s Lemnos 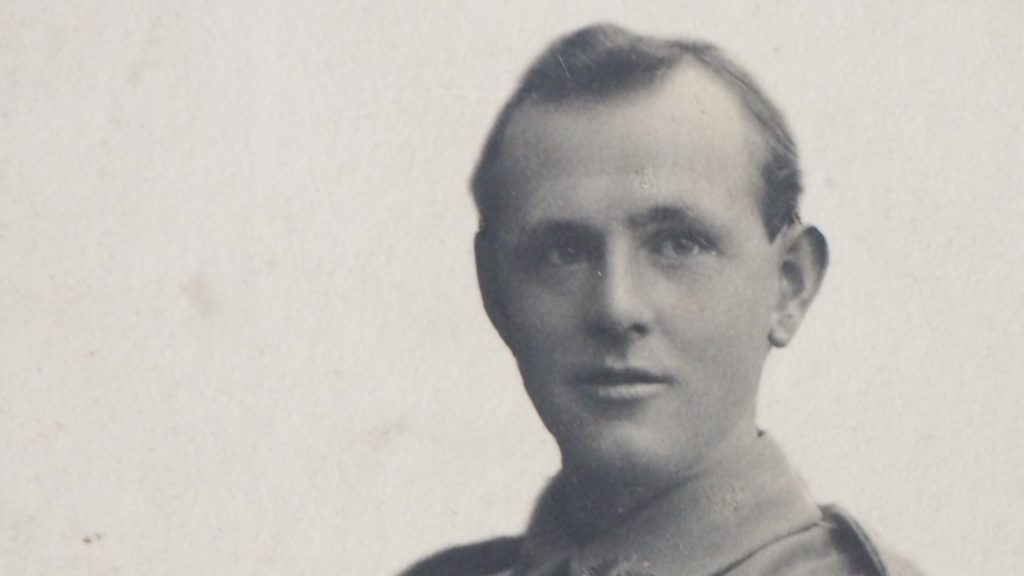 Alec Holland was sent as a reinforcement to a unit in which experienced tradesmen like himself were especially valued. An engineering support unit, the 1st Royal Australian Naval Bridging Train (1st RANBT) was raised in Melbourne and would comprise 300 officers and men. They would serve on the Suvla front at Gallipoli for five months until the end of the campaign, the first contingent arriving there on 7 August sailing from Egypt via Lemnos and Imbros.

Alec’s first vision of Lemnos was from his transport – the Nile – as they sailed into Mudros Bay at on the morning of August 20, on their way to Gallipoli. Like all who arrived here during the campaign, he was amazed at the Allied shipping in the Bay – “A glorious sight harbour full of ships of all descriptions. Battleships, cruisers, submarines, destroyers, hospital ships (6) etc. Two troopships left here.” His stay was brief, leaving Mudros Bay to join his unit at Gallipoli three days later.

Here, Alec, now joined in the brave work of his comrades, undertaking vital engineering works, erecting and maintaining piers, unloading stores and ensuring the supply of fresh water to the troops – often under enemy shelling and fire. As soon as they landed, they had constructed a 120-yard pier in twenty minutes, all under continual shrapnel fire, with the pier operational in five minutes. During their service at Gallipoli two were killed in action and over thirty wounded. One of those casualties was Newport-born Chief Petty Officer Edward Perkins, a former furrier from Essendon, was killed when an enemy shell made a direct hit on his dug-out. After its service on Gallipoli, Alec and the unit returned to Lemnos as the last Australian troops to leave Gallipoli. They would stay on Lemnos for nearly a month, resting and recovering.

Alec was part of the first contingent of the unit to return to Lemnos, the rest returning over subsequent days. As they entered Mudros Bay on the morning of 17 December, Alec wrote how it was “full of ships a fine sight.” They weren’t able to disembark until 1.30pm. He probably landed at the Turks Head Peninsula’s North Pier, from where he would have marched the five miles with all their equipment to “camp”, taking four and half hours to arrive there. This was most probably the Anzac Rest Camp at Sarpi, which lay about this distance from the North Pier. Once at the camp, Alec writes that after pitching his tent – which accommodated seventeen soldiers – he “had a good sleep.”

READ MORE: ANZAC memorial on Lemnos to pay tribute to soldiers who saw peace for the last time

Life in the camp was punctuated by various military duties, such as periods of standing guard, route marches, attending medical lectures as well as afternoon rifle and squad drills. As experienced field engineers, the unit was attached to the military Director of Works on the Turks Head Peninsula, the unit relocating its camp to the Royal Engineers Park located there. Alec writes of how the relocation took place on December 21, despite its raining heavily, with “mud up to knees” and their having to pitch their tents in the dark. At this location Alec witnessed “Turkish prisoners working and playing Crown and Anchor.”

Alec wrote of attending a number of concerts in late December and January. Along with ones put on by various army units, two of these appeared to have involved nurses. Alec wrote of one concert held on 22 December  that it was “splendid (nurses). Another on 10 January was held at 1st Canadian Stationary Hospital. Yet his attempts at social contact could be tempered by sadness. The day after Christmas Day – 26 December – Alec wrote of catching up with Australian soldiers with whom they had sailed from Australia – “Demosthenes Lot” – but noting that there were “few left”, referring to the high rate of casualties suffered by those at Gallipoli.

On Christmas Eve, Alec spent the evening visiting the Australian and Canadian hospitals also located on the Turks Head Peninsula, as many other soldiers based on Lemnos did. The hospitals became a site of social interaction between the returning soldiers and the medical staff, including the novel experience of meeting up with Australian nurses. Alec went on to describe the Australian experience of Christmas on Lemnos, with church services and attending the “Anzac sports in afternoon.” His experience of Christmas dinner was less than optimal, the meal comprising the usual tinned bully beef and rice. He noted that many of the Christmas Billy Cans from Australia distributed to his unit were damaged. There was somewhat of an improvement that following day – Sunday 26th December – when the unit had plum pudding for dinner, following their church service.

For those on the Island, the New Years Eve celebrations provided an opportunity to relax and enjoy the occasion. Alec records attending a “voluntary concert” in the evening but his having left by 9.30pm due to it being “spoilt by drunks … nearly every all drunk.” As the clock struck 12 midnight, Alec writes of the Allied ships in the Bay setting off their whistles, with troops joining in with the rattling of tins and drums. Other accounts record fireworks being set off to see out the old year to the shouts of the Allied soldiers from their camps around Mudros Bay. The food on New Year’s Day left a lot to be desired as far as Alec was concerned, writing that “the food here was the worst we have had in a long time, nothing but arguing all the while.”

Despite his limited time on Lemnos, Alec wasted no time in setting off to visit the locals and their villages. The day after he arrived he writes of going to a “Greek village” (probably the nearby villages of either Sarpi or Portianos) and the following day – 19 December – made off on the 25 miles return journey to Castro (modern day Myrina). He did so without gaining the required military pass, noting of his having been “arrested by picket but got out of it.” He was escorted out of the capital by the pickets and made his way back to camp. On 2 January, 1916, Alec wrote of visiting Sarpi village.

He records the final days of the Australian presence on Lemnos, noting the departure of the patients from the Australian hospitals there on 10th January and the hospitals being dismantled. Alec records that he and unit finally struck camp on Monday, 17 January, and in the afternoon boarded the paddle steamer Sir Joseph Pease which took them out to the transport Empress of Britain anchored in Mudros Bay. It would not be until 8am the next day that Alec sailed out of Mudros Bay, making their final departure from Lemnos and ending his experience there. 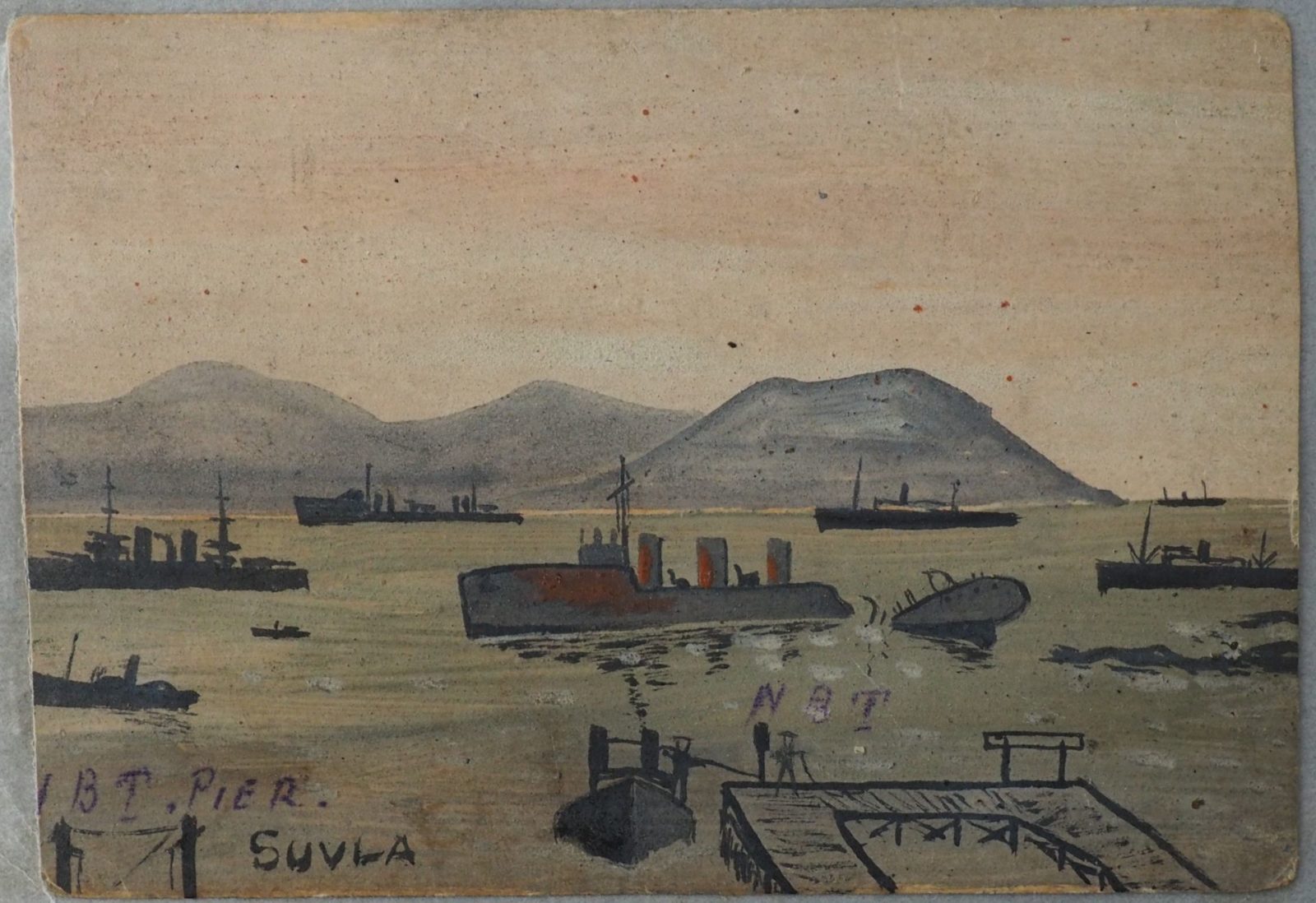 As they departed Lemnos, one of their number was left behind in the Island’s military cemeteries. 32-year-old French speaking Petty Officer Philip Le Seuer was a Channel Islander who was a professional seaman who had also served nine years with the British Royal Navy before coming to Australia. He died on 16th August aboard a hospital ship taking him to Lemnos, having contracted one of the deadly gastric diseases that plagued the troops at Gallipoli, he had survived just 9 days at Gallipoli. His body was brought ashore at Lemnos for his burial at East Mudros Military Cemetery. Phillip was buried in the same cemetery as two of Alec’s fellow former Victorian Railways employees Driver John Charles Douglas and Private Henry Albert Withers.

How interesting that Alec’s former workplace would become the employer for many Greek migrants who came to Melbourne after the Second World War – many no doubt living in Alec’s Brunswick too. Little did they know that they were walking in the footsteps of this young apprentice who had come to their homeland more than 30 or more years before. Another part the Hellenic connection to Anzac.

To honour the service of Alec and the other members of the Royal Australian Navy who came to Lemnos in 1915-16, the Lemnos Gallipoli Commemorative Committee, in conjunction with the local authorities, will soon install a new memorial plaque on Lemnos’ Turks Head Peninsula as yet another part of Greece’s emerging Anzac trail. It was a great pleasure of mine to have presented Ann with a copy of my book Lemnos & Gallipoli Revealed on behalf of the Committee in recognition of her dedication in preserving her grandfathers’ archive, including his connection to Lemnos.

Jim Claven is a trained historian, freelance writer and has been Secretary of the Lemnos Gallipoli Commemorative Committee since its establishment in 2011. He has researched the Hellenic link to Anzac across both world wars for many years and is the author of ‘Lemnos and Gallipoli Revealed: A Pictorial History of the Anzacs in the Aegean 1915-16’ as well as the forthcoming Grecian Adventure: Anzac Trail Stories – Greece 1941. Jim thanks Ann Holland and Malcolm MacDonald for their assistance with this article. To order a copy of either book, please contact Jim at jimclaven@yahoo.com.au.