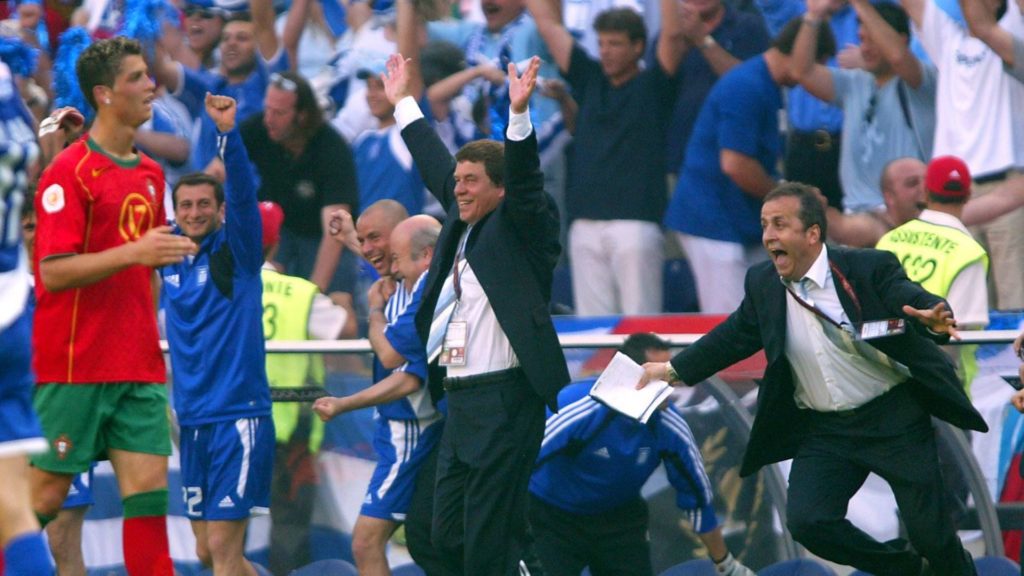 One of the ages. Otto Rehhagel holds his hands high to celebrate Greece's victory at Euro 2004 as the young Portuguese superstar Ronaldo walks disconsolately by. A documentary by Greek-American film maker Christopher Andre Marks entitled King Otto will look at how the Greek team and Otto Rehagel confounded everyone. The film is set for national release on 25 May. Images supplied by Umbrella Entertainment

With football fans in uproar over the proposed formation of an elitist European Super League it is perhaps time to remember that football can deliver a special magic where the most unfancied underdog to take on the best and overcome.

You only have to look at what Leicester did in 2015 or when Denmark was brought in to replace war-torn Yugoslavia in Euro 92. Leicester had Jamie Vardy and Denmark had the magnificent Laudrup brothers who were world class players.

When Greece qualified for the Euro 2004 finals in Portugal, no one gave them a prayer. The team had no big star to call on and their track record in previous tournaments was not the best – no goals scored and quite a number leaked in.

But the team did have a spirit that when properly galvanised can overcome any doubt, any obstacle and without which even a team of superstars can come to nothing. The Greeks also had a master coach who had something to prove, the German Otto Rehhagel.

His playing career as a tough, physical defender began in 1948. Rehhagel turned to management in 1974 and he shares the German record with Jupp Heynckes of having taken part in over 1,000 Bundesliga games as player and manager. He also holds the most mixed record imaginable as a Bundesliga manager: he oversaw the most victories (387), the most draws (205) and most defeats (228). His teams scored the most goals (1,473) and conceded more (1,142) than any other team in German league history.

His last two stints as a Bundesliga manager, with Bayern Munich and then with Kaiserslautern, had ended ignominiously for him in 2000 – the victim of player revolts, smear campaigns and accusations of pursuing a naïve, overly defensive approach to football.

He found redemption when he was appointed the manager of the Greek national football team in 2001 and the rest is stuff of legends.

Greek-American documentary filmmaker Christopher Andre Marks has revisited that famous time in his latest documentary “King Otto” which will be out in release at selected venues throughout Australia on 25 May.

No stranger to sports stories, Mr Marks has an eye for the unusual as is the case for his 2015 documentary “Tiger Hood” that charts the story of New Yorker Patrick Barr who has a passion for golf but has no access to fairways or golf balls.

In an interview with Greek Reporter last year, Mr Marks said that the release of “King Otto” would coincide with the 200th anniversary of Greek Independence.

“Apart from being Greek and wanting to champion Greek stories, I wanted to make this film because I love the theme of the underdog and enjoy stories of outsiders who defy seemingly insurmountable odds to upset the establishment,” Mr Marks said.

“When we began this project a few years back, Greece was inundated with criticism from the global press and very much felt like an outsider in Europe. I wanted to tell this story to remind people of a better time, when Greece was at the center of the world.

“The summer of 2004 was widely considered by many Greeks to be the peak before the subsequent crash, so it was an opportunity to look to the past for inspiration, something we do often in Greece,” Mr Marks said.

He said that the odds were heavily stacked against the Greek team in Euro 2004.

“I think a lot of things needed to go right, but Rehhagel’s inspiration and ultimately the Greek spirit pulled them through in the end,” said Mr Marks.

He said the film would explore all the elements that contributed to the Greek success “so that people can see for themselves just how much had to go right for the stars to align in 2004”.

He said that one of the key elements for success was that Rehhagel engendered a spirit of respect within the team.

“The players respected him and he showed respect to the players in return. He wasn’t influenced by anything other than his own judgment and the players seemed to trust and respect that approach,” said Mr Marks.

♦ “King Otto” is currently set to screen in cinemas in Sydney, Melbourne, Brisbane, Perth and Adelaide as well as regional cities and towns. A comprehensive list will be available nearer the time of release on 25 May.