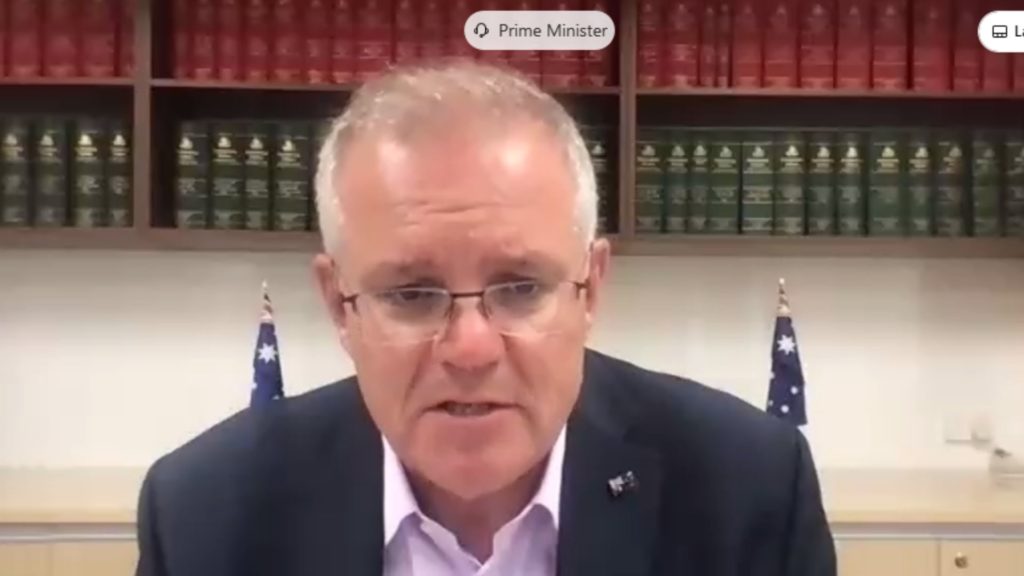 With so many participants present, only several questions went answered, and these were from emerging communities rather than established ones. Their concerns, however, were similar with the main focus being on when border restrictions will be lifted, visa issues, aged care concerns, as well as dispelling myths which CALD communities may have about the COVID vaccine.

Mr Hawke pointed to 2021 being another “unprecedented year” whereas Mr Morrison hinted at another “pandemic budget”. And generally, more fluctuations are to come, “whether it’s flight availability, whether it is vaccination rollouts, whether it is effectiveness of vaccinations, whether it is second or third waves,” Mr Hawke said.

Greeks who feel that getting the vaccination would allow them to get to Greece faster, were not given much hope by Australia’s Prime Minister Scott Morrison who told leaders of multicultural communities that the “vaccination” is not a “silver bullet” which will magically lead to the opening of Australia’s borders.

“What we don’t want to do is find Australia in a situation like so many other countries where people can’t go out, go to work, go and participate in important cultural events in their communities, go visit family and do all of these things,” he said. “To do that we need to keep our borders strong and we need to keep our vaccination programme rolling out, and we need to ensure that quarantine arrangements continue to be the world’s best practice.”

The prime minister said 2 million Australians have already been vaccinated, more than half directly by GPs. In two weeks, GPs will be able to vaccinate those over 50 with AstraZeneca and, for those under 50, “supplies of our Pfizer vaccine are proving to be very reliable”.

Mr Hawke said “we have a rollout that is coming now to a head in the second half of the year”, and partnering with multicultural communities is going to be “the key to much of our success”.

“So many religious and social leaders have come forward and put their positions publicly at the start of our cooperation,” he said, nodding appreciation for the “early and strong statements in support of vaccination” put out by community and faith leaders. He also pointed to information available in 66 languages via SBS as well as the government, while the multicultural youth advisory network will be important in campaigns directly targeting communities.

The Somali community representative pointed to myths circulating concerning vaccines having different outcomes for people of different races, “for example, that people of colour will have more side effects from vaccines”.

Mr Morrison said “it is a complete myth”, adding that “we’ve received no (medical) advice to suggest that there should be any different treatment whatsoever”. “Dealing with these myths is difficult. It is difficult in the CALD communities, but it is difficult more broadly,” Mr Morrison said, urging people to visit the official information at health.gov.au/covid19vaccines, available in 63 different languages.

Addressing the severity of the outbreak in India, Mr Morrison said that repatriation flights have been paused for a few weeks. “We’ve already brought home, through our facilitated or directed flights, some 20,000 people from India,” he said.

All up, since the end of October, Mr Morrison said that 140,000 people have come through Australia’s hotel quarantine system, “and that has held up extremely well.” He pointed to 13 breaches, and hence the system has a “99.9 per cent success rate”.

Mr Wood said, “when it comes to international travel, our key priority […] must be to control and respect our borders”, warning that this is the only way to avoid lockdowns.

“In some of the countries where the vaccinations are rolling out, people have taken that as ‘oh, we can move freely’, whereas in actual fact that it is helping to spread the virus again,” he said.

His office has been getting five or six requests per day by community stakeholders on behalf of people trying to get travel exemptions, however the first priority is to protect Australians and caution needs to be exerted.

Community leaders showed concern for international student visa holders, who have already had their visas granted, but who are unable to enter the country with many having deferred due to poor internet services in their home countries.

Mr Hawke said the government had from the beginning made changes for students to be able to study offshore, however understands that not all countries enjoy the same calibre of internet services. “Providers are going out of their way to enable offshore learning, and that is working. At this difficult stage of the pandemic, we will have to continue with that,” he said, while also adding to the benefits of engaging with international students.

“We have had so many discussions during the course of this about to how we can safely return students and we will continue to do this as we move through this. As the Prime Minister pointed out, we’ve got our vaccination rollout, other countries have their vaccination rollouts, we are building robust travel arrangements between countries over time however we should recognise that that will take more time than what we have right now.”

He said that conversations are taking place with education providers and students as to what more can be done. “We are very committed to the return of students as soon as we can, and we’ll keep working on that,” he said.

Many multicultural groups have noticed a rise in domestic violence in families within their communities. Mr Wood, with a background as a police officer, said “too often we get to see a victim believing that they need to stay with the offender, particularly with children” and pointed to a pathway, working with the home affairs community. “The Morrison government is very supportive of victims of family violence,” he said, adding that another round of Safer Communities funding.

Mr Morrison said “people experiencing family violence will not have their visa cancelled if their relationship breaks down because of family and domestic violence.”

“This is a very important change that we’ve made because this is often used as a threat over women experiencing violence in these situations, when they’re told that they’ll lose their visas if they tell people, and this is not the case,” he said, pointing out how the pandemic has made domestic violence more acute as, in many cases, “victims have been locked up with their abusers”.

READ MORE: Next month’s federal budget is the time to stop talking about aged care and start fixing it

Mr Morrison pointed to 910 Australians who passed away, “the overwhelming majority of those in aged care” – 46 alone at St Basil’s in Fawkner. He said that people “will be expecting us to address those issues within aged care very comprehensively” in the budget.

Bo Zhou of Cass Care, an East Asian aged care provider, pointed to his experience – one shared by Greek providers such as Fronditha Care – where there are huge waiting lists – in his case,100 people on the waiting list for a 63-bed facility. He asked how the government will address this “severe shortage”, especially following the 148 recommendations given by the Royal Commission into Aged Care Quality and Safety.

“The availability of aged care for all older people, including those of diverse backgrounds, is a high priority for us,” Mr Hawke said. “We understand that we have got to put resources in.”