Coming soon: The ‘untold story’ of Aussie Greeks – Oh, and it’s set in the 90s

Michael Nikou wrote the lead role specifically for his boss in his debut feature ‘Slant’. And Elle Mandalis couldn’t be happier playing ‘a loud, opinionated, Greek woman with no filter’. But if you’re after a fish-and-chips themed migrant movie, you’re probably in the wrong cinema. 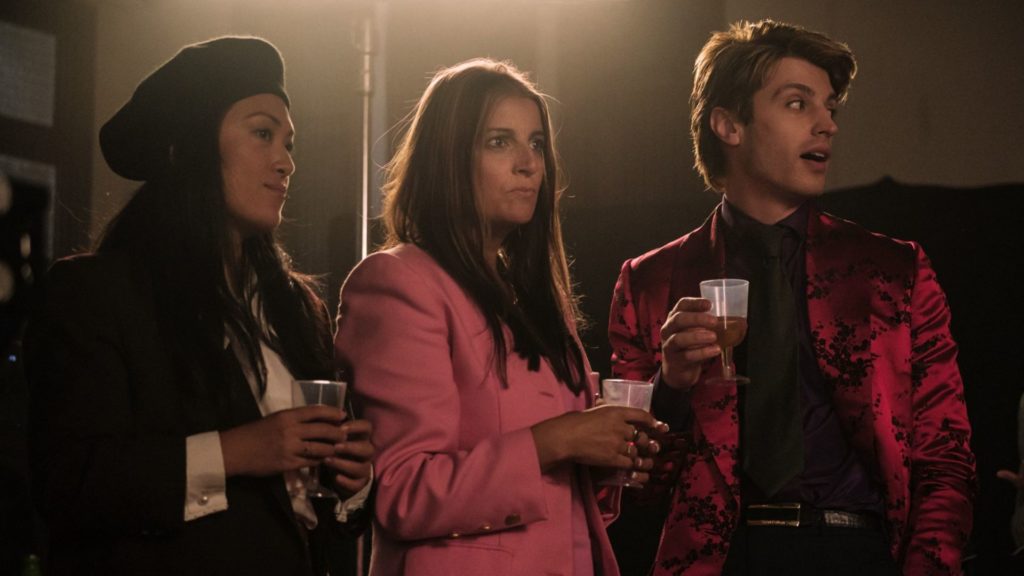 Elle Mandalis doesn’t shy away from the realisation that “being Greek is the reason my acting career is what it is today”.

The first lead role she landed, as a teenager, won her an Australian Film Institute  (AACTA) award.

And she says the performance as Alex in Anna Kokkinos’ “Only the Brave” was what “launched” her career.

But it’s been a thin line between love and hate when it came to Greekness, for the past 27 years working in numerous film and TV productions, with some theatre squeezed in between too.

“In the early 90’s being an actress of Greek heritage in Australia was both a blessing and, in a way, a curse,” Ms Mandalis told Neos Kosmos.

“In the days before screen diversity was really embraced, I was viewed by many as only being Greek[…] If the surname didn’t end in ‘opoulos’ I would never be asked to audition.”

Fast forward to today, Ms Mandalis was chosen for the role of an ‘-opoulos’ lead in an upcoming movie. But this time, she took up the offer enthusiastically. Partly because of the appeal in playing “a loud opiniated, Greek woman with no filter who speaks only truth and is all heart”.

She was also on board with the intent of representing the Greek community on screen, in a non-stereotypical way.

“I find that it’s a really unique film. I can’t relate it to any other film that I’ve seen in Australia before,” she says.

READ MORE: Metamorφosis with a phi, Greek Australian artistry in flux on the streets of Mebourne

Αnd did we mention that the role was written especially for her? A hard to deny offer by Michael Nikou who has been working at Ms Mandalis’ acting school.

Slant is not about Greek migrant life Down Under. Although a Greek Australian family is at the centre of its plot.

“There are Australian characters who happen to be Greek,” Mr Nikou puts the ‘ethnic’ layer of the film into perspective.

Wait, so what’s the story about?

Set in Melbourne’s inner suburbia in the 90s’, the black comedy thriller follows the aftermath of a suspicious local mother’s disappearance. A year after her sister has gone missing, Kaye Kopoulos (Elle Mandalis), might be used to her family being a regular tabloid fodder, but she certainly hasn’t given up on the investigation.

When young journalist Derek Verity (Michael Nikou) offers to help her, a chaos of dark family secrets and ambition at all costs ensues.

Michael Nikou describes his debut feature as a “genre-bender” of comedy, horror film and family drama.

We got a #BehindTheScenes look at indie thriller SLANT, which has created over 80 jobs for creatives – we love it already! Written by MICHAEL NIKOU, directed by JAMES VINSON and starring SIGRID THORNTON (Lambs of God, Wentworth), SLANT is one Australian film not to be missed! pic.twitter.com/HwNzXIrvQX

Asked to elaborate on the last, he replies:

“Well, they say that you should write about what you know. And I know a lot about family dysfunction. We all have our own family life story which is complex.”

READ MORE: The evolution of the “Greek mum”

“I tried to make the film truthful to my own life experience, but I also wanted it to be totally fun. I didn’t want to make anything boring.

“I feel that a lot of artists get so caught up in the message that they’re trying to send or what they believe is really interesting. And they forget they have to play to a mass audience.”

Welcome back to the 90s: Shoulder pads, big hair and no phone zone

So have no doubt, Slant is “a satire most of all, on Melbourne society of that time, particularly sort of the upper class society.”

Scream – yes, the darkly funny 90s slasher that never gets old – Mr Nikou reveals, is one of the artistic influences that inform a combination of “equal parts scary and funny” in the movie. “There’s no murderer running around in a mask or anything. So it’s not like Scream in that way. But certainly in terms of tone. It’s a horror/thriller comedy and very over the top. Everything from the costumes to the production design to even the musical score, everything’s really stylised”.

Ms Mandalis can speak to the comical heightened state of the 90s showcased in the film.

“It was funny seeing all the things that we used to have in the 90s and all the things we didn’t. On the set for example, we had to try really hard to remember not to leave any mobile phones on sight.”

Much like her retro appearance – including long French manicured nails and chunky blonde highlights – her character, she says, is “endearing in a way, although intense and full on.” “Michael keeps telling me he thinks Kaye Kopoulos will have a huge following.”

Ms Mandalis dubs the heroine a “comical relief” bringing to mind a bit of Effie (May Coustas), Fran Fine (The Nanny), or even relatives.

“I can see Kay in so many of my cousins, my aunties, me. I think she’s going to be relatable to a lot of people within the Greek community.

“She’s got her own style and she owns it completely.”

To be or not to to be a Greek actor

Mr Nikou who plays an Anglo-Australian character in the film says it is the “minor and subtle cultural differences that will be surprising for people to watch.”

“I’m pretty certain that we haven’t seen that portrayed yet, at least not at large scale in a feature film.”

In writing the script, he says he wanted to avoid a repetition of the Greek migrant tale.

“I think we’ve seen that story, and it’s been told beautifully by a lot of artists, but to me it’s nothing fresh. “But what I think is the untold story is the younger generation of Greeks, who are dealing with a totally different set of issues, still dealing with racial relations though different. It’s much more subtle. And the cultural differences have shifted, so I wanted to explore that also, because that’s been my experience.”

The second generation Greek Australian admits having had “a big chip on my shoulder” for being an actor of Greek heritage.

“I used to, because of the setbacks that I experienced.

“When I started, it was very hard to get roles because I was Greek[…] Now it’s the opposite. When I go to auditions even when it comes to Greek roles sometimes I don’t ‘look Greek enough'”

She believes what’s missing is the in-between stage of the two extremes that has still to gain prominence in portraying ethnic identity as part of the Australian identity.

“I feel that Greeks, Italians, African, Asian actors, any diverse actor, could play any character. And it doesn’t need to be explained why it is that they on a TV show or film because ‘they don’t look Australian’. Why does their background need to be explained? Why can’t they just be the… main character?”