The issue of recognising the Pontian, Armenian and Assyrian genocides has garnered attention once again in Australia.

United States President Joe Biden’s move to recognize the Armenian Genocide in an official statement on 24 April, upped the ante.

Greek-Australian Labor MP Steve Georganas submitted a proposal for the recognition of the Genocide of the Pontians, Armenians and Assyrians in the Australian parliament.

“This is a proposal that does not have a partisan character and is supported by several MPs. I believe that the climate for the issue has changed, following the move by Joe Biden. There has always been doubt from governments, all parties, but this time I think we will succeed,” Mr Georganas told SBS Greek. 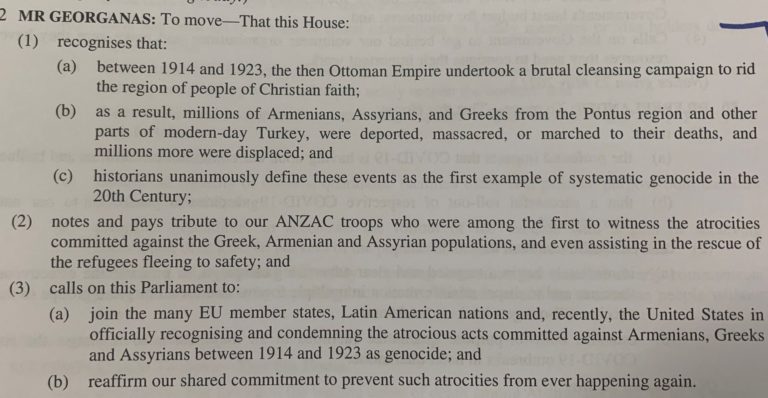 The proposal is expected to be debated in the Australian Parliament in the coming weeks and, if approved, will be the first decisive step, with a vote to follow.

The expatriate MP also has the backing of Liberal MP Trent Zimmerman.

Mr Georganas also included testimonies of ANZACS who experienced the atrocities first hand in the proposal.

“Let us act like other countries that have recognised the Genocide because such a catastrophe must never happen again and if we do not hide the truth we will stop it from happening again,” he added.

The proposal calls on the federal parliament to recognize that the Ottoman Empire carried out practices of systematic persecution of Christians, Greeks, Assyrians and Armenians from 1914-1922.