The 568th anniversary of the conquest of Constantinople was celebrated with a visual feast organised by Turkey’s Communications Directorate in cooperation with the Culture and Tourism Ministry.

In a provoking message for Christians worldwide, Turkish President Recep Tayyip Erdogan said: “I congratulate the 568th anniversary of the Conquest of Istanbul, one of the most glorious victories of our history,” on Twitter. “I commemorate with mercy and respect Mehmed the Conqueror and his glorious army, who added this unique city to our heritage of civilization, he added.

The visuals reminded of the Prophet Muhammad’s saying which read: “Istanbul will definitely be conquered. What a great commander is the commander who conquers it, what a great army that army is.” 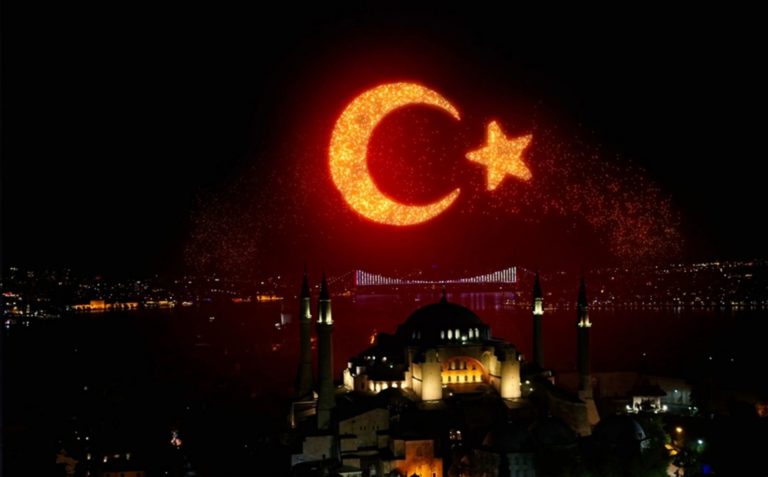 The celebrations continued with the virtual sky mapping show that was used for the first time at Galata Tower and Hagia Sophia, a symbol of the conquest while the image of Fatih Sultan Mehmed Han (Mehmed the Conqueror) on horseback was also featured in the show.

Earlier, Communications Director Fahrettin Altun on Twitter said Constantinople will celebrate its holiday “with all its splendor.”

Meanwhile on Friday, Mr Erdogan inaugurated the first mosque in Istanbul’s Taksim Square, transforming the landscape of the area, eight years to the day after protests began there that shook his government.

The mosque is Erdogan’s mark on the square, the most famous area in Turkey’s economic capital, and a fulfilment of a 30-year-old dream.

“Taksim Mosque now occupies a prominent place among the symbols of Istanbul,” Erdogan said after performing Friday prayers at the site.

“God willing, it will stay until the end of time, he said.