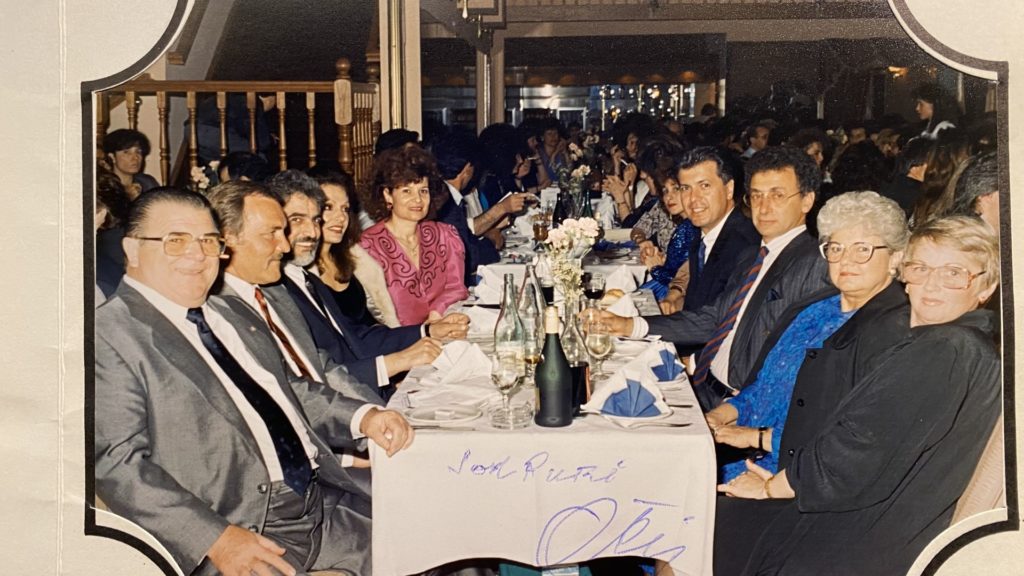 Ferenc Puskás, front left, with, Sam Papasavas and George Donikian on the other side of the table at a Hellas Club function in September 1989. Photo: Val Kopasz

When Ferenc Puskás was appointed to coach South Melbourne FC (Hellas) for three years, hardly anyone outside of soccer registered the legend’s presence. To put it in today’s terms it would be as unlikely as having someone of the pedigree of a Zinedine Zidane or a Lionel Messi coming to coach a league team. But it happened between 1989 and 1991.

That year Puskás, aged 62, led the Hellas team to take the National Soccer League title in 1991. Under his stewardship, the team also won the Australia Cup and Dockerty Cup. It was a special time in Australian sporting history that has been surprisingly ignored until now.

Three Australians who want to redress that are Robert Heath, Cam Fink and Tony Wilson who with support of the Documentary Australian Foundation are working to complete a 60-minute documentary whose working title is “Puskás and the South Melbourne Hellas”. A film that charts the story of Puskás’ “bizarre recruitment to Australia (via a Hungarian junior football club)”.

Robert Heath, a barrister, who with Cam Fink is the film’s director, told Neos Kosmos that he is appealing to members of the Greek community for original pictures of the era and video footage that will be included in the documentary that is set for completion by October.

The filmmakers also looking for funding to pay for the licence fees to use footage of the Hungarian superstar’s games that are owned by FIFA, the world football governing body, and the International Olympic Committee.

He said that costs were high with, for example, FIFA was charging (US)$286/per second of archive footage of Puskás games and national broadcasters ABC and SBS charging over $80 per second for footage of the games in the early 1990s.

“We are seeking to raise $125,000 for this footage and other expenses. We want to tell the story and would appreciate any support to complete the film, whether financial or with pictures and video/film footage of the games” said Mr Heath.

Mr Heath, an Aussie Rules Football fan, remembers the big crowds gathered outside the South Melbourne’s Middle Park football ground on Saturdays as he made his way to the MCG to watch a footy game in the early 1990s.

“A lot of us didn’t know what was going on in Middle Park at the time. We were ignorant of Greek culture and what football/soccer meant to the community of the time,” Mr Heath told Neos Kosmos.

“The game was an expression of their culture and sense of community and Puskás understood all that. What we Australians did not understand was that he had the same legendary sporting status as Donald Bradman or Phar Lap had for us.”

The intention of the film is not just to document Puskás’ time with the club but according to the film synopsis it will also reflect on the lives of “Greek migrants in Melbourne in the 1980s and 1990s – their struggles and how their cultural and sporting institutions helped them to make a contribution to multiculturalism, their communities and Australian society.”

“But this is more than a football story. It’s a story about immigration, multiculturalism, and the parallel universe that was Australia’s NSL, invisible to sports fans from an Anglo background, but vital to European Australians and their children.”

The documentary will also cover the relationship between Puskás and his players including future Socceroos coach Ange Postacoglou who drove “The Boss” (as Puskás was known) around in his Datsun.

During his playing career, Puskás led one of the great teams not to win a world cup, the “Mighty Magyars” of Hungary of the 1950s and he was the star striker of the all-conquering Real Madrid teams of that era.

As a manager he led Panathinaikos to the European Cup final in 1971 and became a fluent Greek speaker in the process. He also managed the Hungarian team.

A bust of the great player has been erected in Melbourne’s Olympic Park.

If you have pictures or footage to contribute to the film email Tony Wilson at tony@tonywilson.com.au or Robert Heath: heath@vicbar.com.au.