“There wouldn’t be many Greeks reading this paper that don’t have someone in their family who was creative” – With a Trojan Horse as his label’s logo, Jordan Gogos states determined to represent his community on the runway 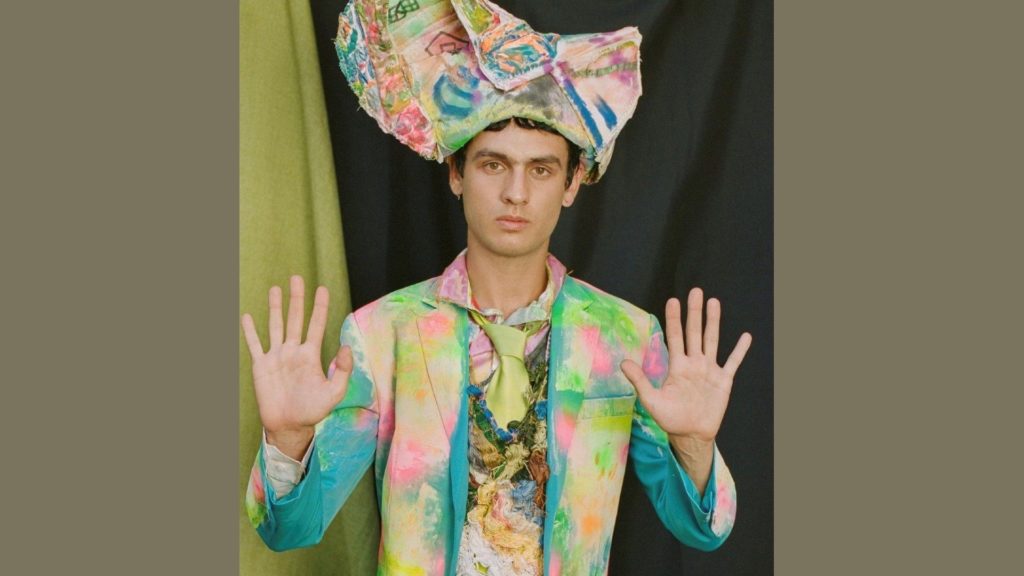 Australian Fashion Week is back on this year, featuring among its up-and-coming designers’ cohort, a young, proud Greek Australian.

His great grandmother was a dressmaker, his yiayia was a knitwear maker and a seamstress, and he grew up in a home surrounded by his mum’s art. But Jordan Gogos says he is the first of his family to claim a place within the industry of fashion and creativity more broadly; and he believes there’s a bigger picture behind this milestone.

“In every person’s family, especially being Greek, there is a making culture in, whether it’s you know food, or art there is that sense of making,” he tells Neos Kosmos.

READ MORE: The legendary doily: a trademark in every Greek Australian household

“But our grandparents despite how creative they were, they never had the opportunity to completely pursue that.”

The South Sydneysider – whose family hails from the village of Sagiada in Epirus and Corinth – is introduced as one of “The Changemakers” in Australia’s pinnacle fashion event, a movement championing “an overall wider cultural shift via fashion”.

Jordan Gogos "AAFW the Changemakers" is a multi-disciplinary designer who is adding #AUSFW to his long list of design work. Gogos will be showcasing his first ever full collection from his label @Iordanesspyridongogos on Thurs, 3rd June at 2:30pm. ⁠ pic.twitter.com/y6CLi4V9pl

Transitioning from the furniture-making craft, Mr Gogos will be showcasing his first full collection of a brand that he terms “experimental, non-gendered and innovative in its approaches to sustainability.”

Collaboration is a the heart of his label’s espoused principles, seeing him joining forces with a collective of 25 designers for the Australian Fashion Week show.

And he is determined to promote,his Greekness, from incorporating his yiayia’s yarns in the wearables to naming the brand after his pappou and launching a Trojan horse as the front logo.

“It’s metaphoric of the story of the Greek soldiers who were able to take over the city of Troy, after years of siege by hiding in the horse. So, you know, it’s really that approach of bringing new people into the industry and changing the way that we engage in fashion.”

Neos Kosmos caught up with the 26-year-old designer for a Q&A ahead of his label’s Australian Fashion Week debut.

How did you start your brand?
My brand started as a result of COVID. With COVID affecting ways of storing furniture with my brand GOGOS – I went and bought a domestic SINGER sewing machine and began making. The easiest ways to informally train yourself to make is by deconstructing existing clothes – which there is an abundance of.

Why did you name it Iordanes Spyridon Gogos?
Iordanes Gogos is my Greek name. I only just returned back to Australia soon after my pappou Spyridon’s passing. I was always told I was going to be called Spyridon, so I named the brand in honour of him. I love when people ask me how to pronounce the brand, it makes people question where the brand stems from. It’s putting (modern) Greek design at the forefront of Australian and global fashion!

What do you want people to think/feel when they see your creations?
Curious. I always say that a design being ‘digestible’ doesn’t excite me. Why would you be excited about something you so easily understand. Good design should be thought provoking and sometimes a shock factor. That shock shortly transitions to familiarity and allows for everyone to think more broadly and progressively.

READ MORE: How fashion designer Effie Kats rose back to the top, smashing stereotypes on her way up

How would you describe your connection to your Greek heritage?
Being a second generation Greek-Australian with all my grandparents being Greek and raising me closely, I feel my identity is strongly tied in with my Greek heritage. What I have been understanding more of recently is that as Greek-Australian with only four days in Athens as my experience – we make up our own identity of being Greek with the shared stories and traditions of our families. It’s like we’re the ‘remix generation’ – playing the sounds of Greece in the background but mixing it up with our own songs.

You’re the first in your family to take a step into the fashion industry. What does this mean for you?
I think its safe to say there wouldn’t be many Greeks reading this paper that don’t have someone in their family who was creative, a maker, a seamstress, did things a little differently to others. What I’m doing now is really what my family have done for generations – but it’s the first time that my family, since migrating here in the early 1960’s, have been acknowledged by mainstream media here in Australia. I feel like I’ve broken the fourth wall and it’s exiting that we can see that our craft is being taken seriously and that we have the opportunity to exist much more prevalently in the creative community. I am looking forward for my entire family including my yiayia and pappou to attend the show.

*Australian Fashion Weeks runs in Sydney from Monday 31 May to Friday 4 June.