Open Dialogue Series conjures images of forsaken Epitalio, all of Greece in one overlooked town 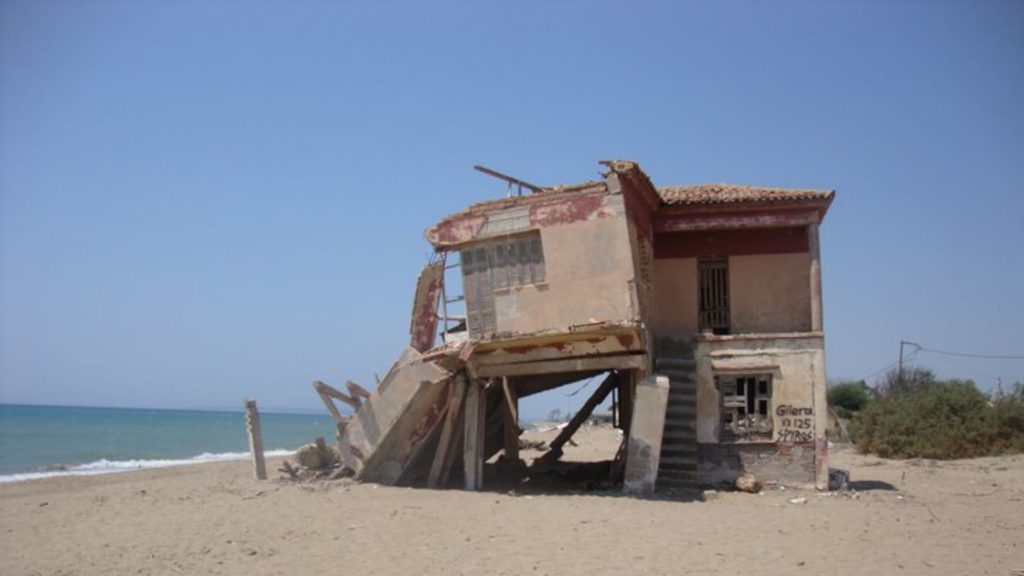 Arbitrary housing development on the sandy stretch of Epitalio ensures that the tourists are kept at bay from the warzone between man and nature. Photo: NK

On the verdant slope of Dardiza, where the 110km-long Alfeios River forms its delta, survives a picturesque town which, during the Mycenaean Age was known as Thryon, and later – during the Greek War of Independence in 1821 – was renamed Agoulinitsa after the region’s exquisite wetlands. It heroically fought bloody battles against Ottoman Turks, survived two world wars and post-civil strife.

These days, most people just drive by, ignoring it on their way to the antiquities in nearby Olympia. Those who take the time to veer off the main road, usually do so just to ask for directions.

Those who stay a little longer, may be curious enough to ask the locals about the man-made swamps, the result of farmers leaving the olive groves to exploit EU-funded money in an abandoned farming project gone wrong.

As the Alfeios river flows to the coast, you’ll find stretches of enviable golden sand beaches where loggerhead turtles once laid their eggs but which, unfortunately, the Archelon sea turtle protection society left to their own devices in preference for the more upmarket hotspots, such as Zakynthos and Crete, where turtles also needed saving (but young hip environmentalists got some nightlife to boot).

In winter, waves swallow the man-made structures to reclaim the beach, getting their revenge. What’s left are images of neglect and abandonment despite the fact that Epitalio is part of the Natura 2000 network – just another fancy EU label which locals seem to ignore.

READ MORE: Greek government calls on diaspora to invest in Greece, but not just for &#8216;sentimental reasons&#8217;

Bittersweet summer memories were rekindled by Dr Dionysia-Theodora Avgerinopoulou, a member of the Hellenic Parliament and Chair of the Special Permanent Parliamentary Committee on Environmental Protection – one of the 40 under 40 of the EU’s most promising political leaders – who met with the Greek diaspora via the Greek Australian Dialogue Series of the Australian chamber of Commerce and Industry – a bridge for Greek Australians to get insight into opportunities available in the country of their heritage.

The forward-thinking politician invited Greek Australians to the sulfuric spas of Kaiafa, a place of true beauty and potential, but whose buildings have for the last few decades at least been in a constant state of decay, littered with plastic and debris, sadly in need of renewal and investment to showcase the beauty hidden beneath. Are you listening Greek Australians? If you want to invest, just visit.

She showcased funding available, plans and opportunities, not just for Kaiafa but for all of Greece, and said, “In recent years, there has been a growing tendency for the business world to take environmentally friendly initiatives and practices and integrate climate change into business strategy, within the framework of protecting their competitiveness, which is a prerequisite for their viability. The development of a climate-wise economy will lead to the attraction of environmental and energy investments in Greece and many other countries around the world. Attracting this kind of investment will be a ‘stepping stone’ to strengthening the restart of the national economy, in the context of sustainable development.”

There are plans to revitalise the country through innovation funds, with two hubs already in Greece, to spearhead business and incentivise entrepreneurs. There are regional efforts to pioneer environmental programmes in areas such as that of Astypalea, the small Aegean island, which has set out on a course to convert from diesel to electric in road traffic and wind and solar power generation in a joint project between Greek government and German Volkswagen Group. A global campus in Olympia will invite researchers and academics from all over the world to share their views and spearhead intellectual exchange.

As Paul Nicolaou, Director of the Australian Chamber of Commerce & Industry Business Leaders Council, wrote on Linkedin in reference to Dr Avgerinopoulou’s talk: “Greece’s rich natural environment is a major economic asset and provides many ecosystem services such as drinking water and water for irrigation and industry; food; habitat for biodiversity, tourism and recreation, etc. but is under increasing pressures from rapid urbanisation, industrial and agricultural intensification, inefficient energy generation and tourism expansion.”

But while everyone agrees that Greece has a lot to offer, a world of EU funding means nothing without a change of attitude – because let’s not forget – it was an EU-funded project which helped in the demise of Epitalio. Neos Kosmos asked Dr Avgerinopoulou what is being done to change behaviour, to stop people from exploiting EU funds, so that locals are not in it just for a “fast buck”. 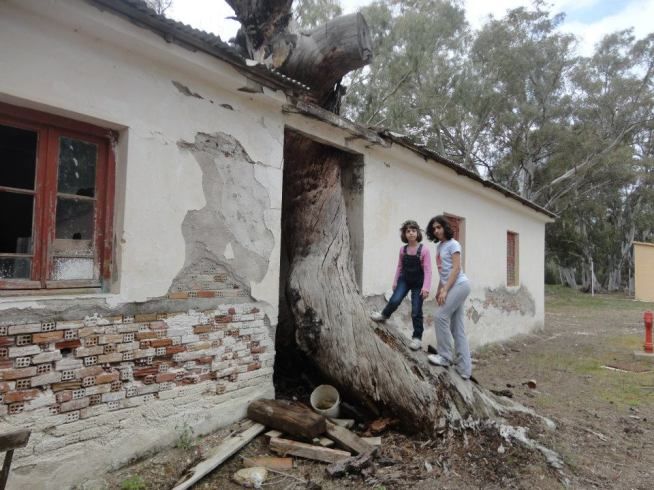 “Due to the Natura 2000 regime, the Greek state has developed a specific piece of legislation that actually protects this piece of nature right now, from Epitalio to Kyparissia, including Kaiafa, and there is no way to have industries and other activities that pollute the environment from now on. This is why we are focusing on the depollution of water, depollution of the souls,” she said, adding that an assessment is being conducted of all the old sources of pollution, mainly but not confined to agricultural issues,” Dr Avgerinopoulou said.

As for attitudes, she said only a small per cent of the money is given beforehand in comparison to previous times. Furthermore the EU and Greek state have auditing mechanisms to ensure that ESG criteria are being followed.

“At the same time, generations have changed,” she said. “Maybe my generation, but especially the younger generation are environmentally and socially sensitive and they don’t need anybody to impose restrictions of them.”

Dr Avgerinopoulou was of course there to showcase all of Greece – not just Epitalio, but Epitalio is an interesting case study as it is a village that has wetlands, coast, wildlife, olive groves, ancient and medieval relics, four places of worship – including a monastery and a castle. It’s a small village of around 1,000 people, blessed with so much beauty and yet, it remains a sleeping beauty without many prospects at the moment – an area which has nothing, but everything. Just like all of Greece.