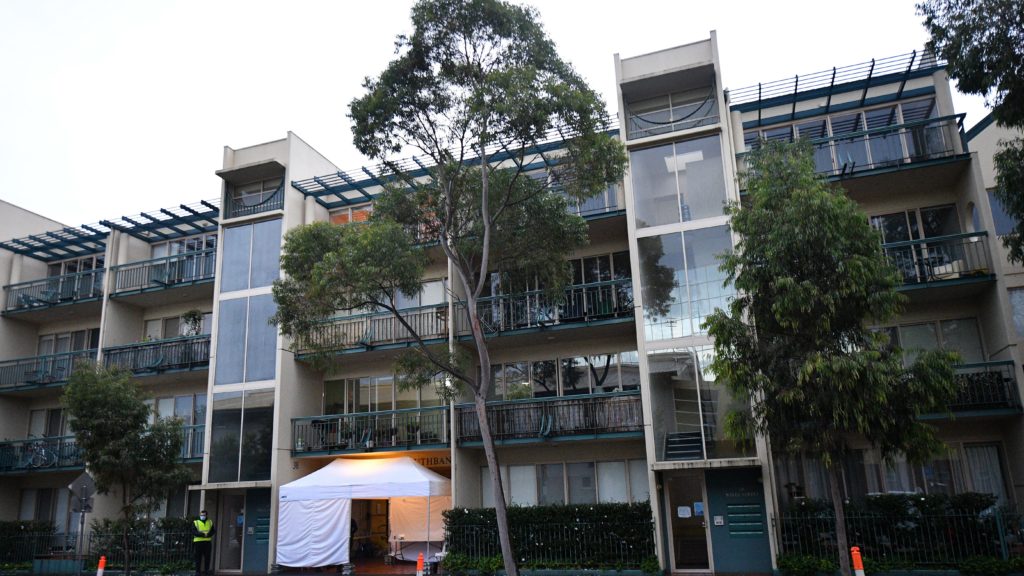 A general view of the locked down Kings Park on Southbank apartment building in Melbourne, Wednesday. Victoria has recorded five new cases of coronavirus in the past 24 hours. Photo: AAP/James Ross

It is expected that Victoria’s state government will ease restrictions within the next 24 hours, including the end of the 25km travel bubble.

Two new locally acquired COVID-19 cases, however, were revealed at a Tuesday afternoon press conference, bringing this morning’s 24-hour total to five new cases of COVID-19. Two of these are linked to a Southbank apartment complex outbreak and are counted with Wednesday’s figures. The complex is currently in a 14-day lockdown.

As a result of the new cases, more exposure sites have been announced, including South Melbourne Market which was listed as an exposure site after a positive case attended the busy venue on Saturday, 12 June, from 11.30am to 1.30pm.

As a result, the market, which is now a Tier 2 exposure site, will be closed today and anyone at the venue is advised to get tested and isolate until they receive a negative result.

Certain stalls within the market have been listed individually. These include Fruits on Coventry, K and L Poultry, Golden Dragon Asian Grocery, and Kirkpatrick’s Meats.

Dozens of other venues around South Melbourne, Port Melbourne, and the CBD were also added to the list last night.

Current restrictions are expected to end at 11.59pm Thursday and it is expected that new eased restrictions will be announced at today’s press conference.

Media reports that among measures set to be announced are plans to ditch outdoor masks, bans on home gatherings and the travel bubble. These are currently being discussed in a cabinet meeting on Wednesday morning. A senior government source told the Sun Herald that the changes will be announced on Wednesday but may be put off until Thursday.