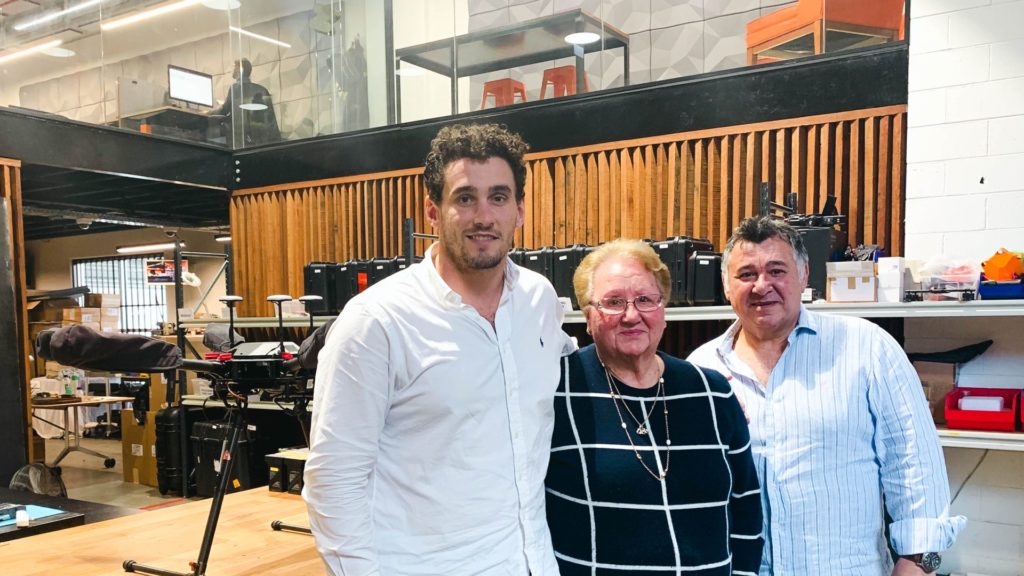 “Speak to your passions, passions sell,” is the advice Paris Cockinos offers to anyone who is starting out in life. The 27-year-old Sydney-sider is the founder of Sphere Drones, a successful business that has tapped into Australia’s rapidly expanding drones’ market.

Drones are no longer the preserve of hobbyists and movie makers but are increasingly seen as a new cost effective and safe alternative for use in a host of industries and services, but more of that later

While he may not build drones, Mr Cockinos told Neos Kosmos that he is a design thinker who knows how to maximise their use in society and that use is growing rapidly.

His passion began with radio-controlled aircraft and then drones at an early age .

From age 10, you would find him in his grandfather Paris’ TV and radio communication repair workshop in Sydney working on the control boards of his helicopters. His father, Jack, developed the business and specialised in two-way radio communication used in the airline industry and police emergency services.

At high school, he preferred to work with his father to repair the circuit boards of two-way radios rather than go out with mates.

As the technology improved, drones became increasingly popular and Mr Cockinos sensed an opportunity. His childhood hobbies placed in a unique position to take advantage of a developing technology.

In February, 2012, a year after high school he asked his dad for a $10,000 loan to buy six drones to sell at a profit. The idea proved a good one. By the end of that year, he bought 100 drones to sell online for Christmas. Sphere Drones grew from that period.

“Yiayia’s garage was full of drones … it was our logistic centre,” he said. His grandmother, Tassoula, comes every day with coffee and sandwiches for her grandson and son, Jack who oversees Paris Radio under the Sphere Group which also incorporates Sphere Drones.

The following year, while studying design and engineering at the University of South Wales, a tutor introduced him to a friend who was looking into how to apply drone technology to Sydney Water operations.

In 2014, Mr Cockinos developed a succesful water-sampling system that used a drone to take water samples in North Bondi/Dover Heights area. An operation like that would have required the use of a boat and three members of staff. The use of the drone proved the same job could be done cheaply, quickly and with no personal risk to the people involved.

Sydney Water were sold on drones and were the first drop in the wave that Mr Cockinos and Sphere Group have been riding since. He launched a development team and a flight operations team that year.

Over the following years, high profile clients like Rio Tinto, Sydney Trains, Agriculture Victoria and New South Wales Police among others came on board.

He said Sphere Drones was into drones and robotics as a whole “any equipment that is remotely operated or even autonomous – land-borne, water-borne and airborne robotics”.

The company also offers rental, training and equipment servicing for its growing list of clients. It employs 27 people divided into four teams across three states and six more employees are set to soon join the company.

“There are a lot of different industries and applications for drones. The uses for them are still growing. The company is reaching a point where it has team members specialising in specific segments in the field. We are throwing ourselves at everything, the industry is growing so much, every day there is a phone call with a new application,” said Mr Cockinos.

“A big part of my role is to think about how the businesses of tomorrow will use drone technology – from here we align ourselves with solutions and innovation opportunities.

“We don’t know what the business would have looked like without COVID. We have seen growth of up to 40 percent year on year, over the next two or three years I expect to see even more growth. It is amazing, if we play our strategic initiatives well enough, our forecast define 200-percent growth.”

He said in Australia there were already 2,200 licence holders broken down by industry and state and over 700 people are training to operate drones each month. Mr Cockinos is plotting for the Sphere Group to be a company worth $100 million.

A recent report by Deloitte Access Economics found that the growing drone sector in the economy would provide savings of $9.3 billion to businesses over the next 20 years including savings of $2.95bn for agricultural, forestry and fishing industries, $2.4bn for the mining sector and $1.34bn for construction

In the scheme of things, Australia may be a small market compared to the US and China but it is a country that loves innovation.

“The Googles, Ubers, Amazons (and other big tech companies) try things out first here because we have got such a diverse society which takes on new technology in an agile way. US and China are big markets but Australia is an accelerated country, I feel we adapt better than other countries – we have what the US and China have but on a smaller scale. The scales are overseas but the more we adopt to innovation, the better,” said Mr Cockinos.

“I am still 27 and I am at the forefront of something new, innovative and exciting. My mantra is ‘small, incremental success’. I see myself as very much as a design thinker – what you can do to get the most out of your idea/thought”

“Selling and repairing anyone can do. I am working on what will be needed in order for drones to take deliveries to the home or the office. What does this future look like?”