An ode to the Greek periptero, memories rekindled by a miniature work of art 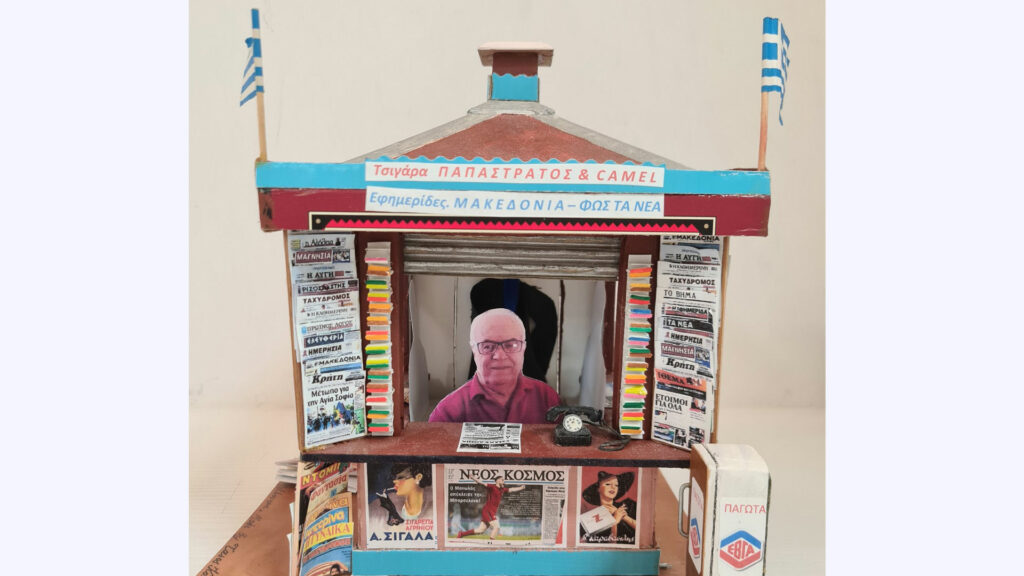 The periptero which graces the NK office. Photo: NK

One of the loveliest memories of my childhood years was purchasing cigarettes and the newspaper for my father from the periptero of kyr Aleko down the road, on the corner of Makrygianni and Metamorphoseos streets at Moschato, a suburb in the southwestern part of Athens.

The first time my father sent me there, I beamed with pride as this trip to the Greek kiosk, at the heart of every neighbourhood, meant that I was old and trustworthy enough to undertake such a difficult mission.

I remember my head, barely reaching the window, yelling out to kyr-Aleko, the periptera, so that he would notice me.

“A 22 and an Eleftherotypia,” I replied.

After successfully fulfilling my task, I began to go time again and kyr Alekos always made sure he filled my hand with sweets, chewing gum at 1 1/2 a drachma per gum and anything else to get me out of his hair.

These memories were reignited when I entered the Neos Kosmos office and saw a paper miniature hand-made periptero, created by the talented Tasos Kolokotronis.

The little miniature took me to another time and place, to a place of youth. Sounds and scents were rekindled. I remembered the chocolates, ice creams, sweets, and every Tuesday when yiayia Froso would take me by the hand after the laiki (market) to offer me any 1 1/2-drachma treat which caught my fancy.

And kyr Aleko, a neighbourhood fixture, saw me grow up through his little periptero window until one day I bought my own cigarettes, lying to kyr Aleko that they were for an uncle or some visitor. And I used the little red phone on the side of the periptero to call the young man of my romantic girl’s fancy, lying yet again to kyr Aleko that the phone at home had malfunctioned and I needed to call a classmate for homework. He’d say, “Entaxi, Maria”, trying to convince me that I had convinced him.

The last time I saw kyr Aleko, his black curly hair had turned all white and wasn’t as thick as it used to be. He had a tough time getting into his tiny periptero. But his smile was as bright and happy as always. His voice was familiar and friendly, and he spoke to my own two-year-old daughter with the same kindness he had spoken to me so many years ago. “What would you like, little girl?” he asked.

In Australia the notion of a periptero doesn’t even exist, and my youngest daughter doesn’t even remember what they are.

I struggle sometimes to tell my Greek Australian students about the humble periptero.

So when I saw the little periptero created by Mr Kolokotroni I felt enthusiasm and was moved. His work, a testament of our Greek memories and childhood.

“Periptero and peripterades, which once operated as mini markets and corner stores, are disappearing from the squares and pavements of Greece,” he told Neos Kosmos. “They sold various items, mainly newspapers, cigarettes, magazines, etc. Beside them were EVGA refrigerators with ice creams, juices and soft drinks, even milk, and they also had a public phone and were a source of information for the area. You could find hundreds of little things there,” he said.

“In the summer of 1994, my wife and I were on a holiday to Athens and at a periptero near Syntagma Square we saw Neos Kosmos being sold. We were curious. How could Neos Kosmos be sold in Athens? I asked the periptera to give me Neos Kosmos, and he said: ‘We don’t sell it here countryman. It was brought to me from my brother in Melbourne and I advertise it. They come, ask me what it is doing here, and always end up buying something else.’,” Mr Kolokotroni said, remembering that he too asked for a Makedonia.